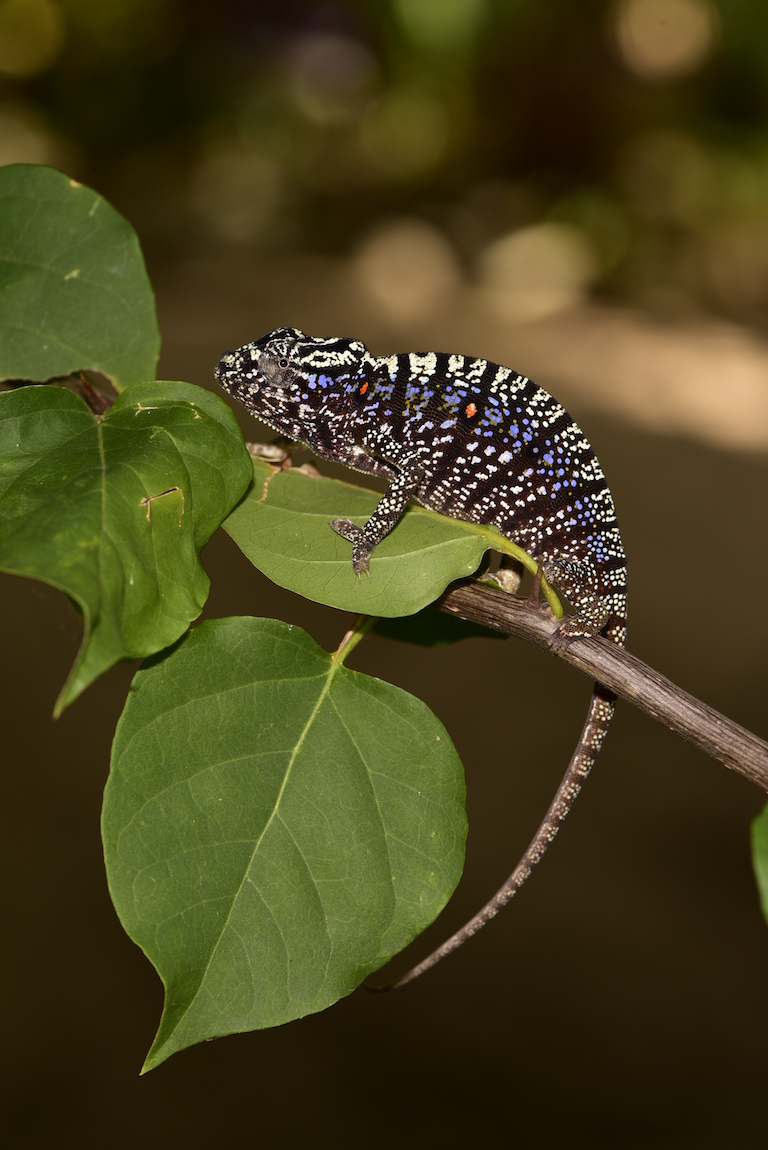 Armed with headlamps and flashlights, a team of researchers in northwestern Madagascar searched through the night for an elusive chameleon, Voeltzkow’s chameleon (Furcifer voeltzkowi), which hadn’t been spotted for more than 100 years. On the sixth day of their expedition, they found it. But the species wasn’t in the forest as they expected: it was in a large, uncultivated hotel garden.

“It was a special mixture of great pleasure, excitement and relief,” expedition leader Frank Glaw, head of the Department of Vertebrates at the Bavarian State Collection of Zoology (Zoologische Staatssammlung München), told Mongabay in an email. “And the good feeling of a happy end!”

In total, the team found three males and 15 females roosting on tree branches near the hotel. But this wasn’t the only discovery — they also noticed that the skin of the females could change into vibrant colors.

“A female sleeping on a branch at night is not very colourful and relaxed females are largely green,” Glaw said.

“But if a female encounters a conspecific male or gets excited when handled by humans they quickly get a very contrasting pattern including black, white and blue as predominant colours.

The colour change is probably most intense if the females carry fertilized eggs in their body.”

The expedition took place in 2018, but the team only recently published its findings in the German scientific journal Salamandra.

In the paper, they compare the Voeltzkow’s chameleon to another species, the Labord’s chameleon (Furcifer labordi), considered to be its close cousin.

Both species, for instance, are believed to only live for a few short months during the rainy season.

“[Y]ou have to be in the right place at the right time to be able to detect these chameleons,” Glaw said, adding that the brevity of their lives may be one reason they’ve eluded researchers for so long.

According to the study, the Voeltzkow’s chameleon should be qualified as an endangered species if using the criteria of the IUCN, an organization that compiles data on the conservation statuses of plant and animal species. However, the species has yet to be officially evaluated for the IUCN.

“Species not seen for many decades or even centuries … are likely to be seriously threatened with extinction,” Glaw said. “The earlier their threat status can be clarified, the better the chances to prevent their extinction by conservation measures. Luckily, F. voeltzkowi does not appear to be Critically Endangered since its distribution range is apparently relatively large (ca. 1.000 km2), but this rough estimate is in need of confirmation by future studies.”

The Voeltzkow’s chameleon is one of Global Wildlife Conservation’s (GWC) “25 Most Wanted Lost Species.” Six species on the list have already been found, including a Somali sengi that was spotted last year in Djibouti after being “lost” for more than 50 years. Others, such as the bullneck seahorse (Hippocampus minotaur), the Wondiwoi tree-kangaroo (Dendrolagus mayri), and the Sinú parakeet (Pyrrhura subandina), have yet to be rediscovered.

“The Voeltzkow’s chameleon adds color and beauty to the planet, and reminds us that even when all seems lost, a great adventure can rekindle hope even for species we haven’t seen since Woodrow Wilson was [U.S.] president,” Don Church, GWC president and a search for lost species program lead, said in a statement. “Now we have so much to learn about this extraordinary reptile, including how we can best save it from extinction.”

This article by Elizabeth Alberts was first published on Mongabay.com on 2 November 2020. Lead Image: A female Voeltzkow’s chameleon that is experiencing stress, and has changed color and pattern. Image by Kathrin Glaw.