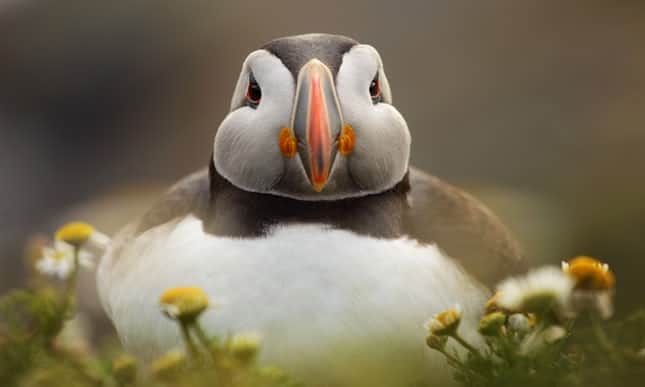 Bryony Baker lies spreadeagled at the edge of a cliff and reaches her hand deep into a hole in the ground that is almost entirely hidden beneath a clump of grass. She pushes further in and her arm disappears up to the shoulder.

It is a little like watching a vet getting up close and personal with a labouring cow. “Ouch!” she exclaims suddenly, her face creasing in pain. She pulls her arm out and inspects her fingers, already covered in scars. “That one’s definitely a puffin. They look sweet, but they can be pretty aggressive.”

She presses her lips together in anticipation of another nip and pushes her hand in again. A large, dirty white egg emerges from the burrow – “warm, good” – and she places it safely on a cushion of moss. She reaches into the ground again.

When she withdraws it, a second later, she’s holding an irritated puffin by its orange beak. She rings it, notes its number – this is now Bird EZ88918 – then gently replaces it and its precious egg in the burrow.

Baker, who is funded by the Joint Nature Conservation Committee, is this year’s seabird researcher on Skomer island, a remote wildlife haven off the west coast of Wales, which is managed for seabird conservation by the Wildlife Trust of South and West Wales (WTSWW).

By late May, the island is covered in a violet haze of bluebells mixed with red campion. Together with its neighbouring island Skokholm, Skomer is home to the highest concentration of Manx shearwaters in the world. But here on the narrow, high isthmus of land that still just connects Skomer’s main landmass to a smaller outcrop known as The Neck, it is puffins (a type of auk) that are in the ascendant. With this year’s count recording nearly 31,000 individuals, up from 14,000 in 2013, breeding adults are even starting to encroach into what were once “Manxie” burrows.

“We need to be cautious. We might have had an optimal day for counting them this year,” observes Eddie Stubbings, one of Skomer’s two wardens. But whatever the exact number, there is now a housing problem on the slopes where puffins hang out in the brilliant late-afternoon sunshine. A puffin takeover has begun in earnest. This involves the portly little birds marching into shearwater burrows and determinedly dragging out the hapless inhabitants. Graceful in the air but helpless on land, the shearwater becomes easy prey for hungry gulls. Bird EZ88918 is one of three puffins Baker discovers today that have commandeered burrows known previously to have been home to a pair of breeding shearwaters.

The apparently rude health of this Welsh puffin population is in marked contrast to the species’ catastrophic decline in what were once thriving colonies on Shetland. The RSPB’s seabird specialist Dr Ellie Owen confirms that on 20 monitored sites across Shetland, the 33,000 puffins counted in the last nationwide census in 2000 have plummeted to just 570 individuals. A Further afield, these auks are also in dire straits: Norway has seen vertiginous crashes, with hundreds of thousands of adult puffins in the once-teeming colony of Røst struggling to fledge any chicks in recent years.

Working out the reasons behind the dramatic seesawing in the populations of this seabird – as well as why there have recently been devastating declines in some other seabird species, such as kittiwakes – is now exercising the brains of seabird scientists across the country.

Seabird counts have, for example, revealed the magnitude of climate-change effects – “even though, when monitoring started, no one had heard of it,” says Prof Tim Birkhead of Sheffield university. He has been monitoring the population and breeding success of another British auk numerous on Skomer, the guillemot, for four decades. Climate change has warmed the oceans, and scientists suspect that this is forcing cold-water fish species further north, meaning, in turn, that seabirds struggle to find food close to their traditional breeding grounds. “It’s only if you have accurate knowledge of what is happening to bird populations that there is any chance of taking action,” says Birkhead.

Seabird scientists regard puffins – which in the breeding season are the only species to return to land with fish very visibly held in their beaks, as long as there are fish to be found – very much as coalminers used canaries.

“Puffins are seen as ocean sentinels – their survival and breeding success is indicative of the health of the ecosystem they depend on,” observes Dr Matt Wood, senior lecturer in biosciences at the University of Gloucestershire. Wood, who works with the WTSWW to coordinate the seabird counts on Skomer, notes that continued monitoring is essential, given that puffins are now on the British Trust for Ornithology’s red (endangered) list. “Seabird populations do not just change this rapidly unless something strange is happening,” he says. Puffins are long-lived birds, that raise just one chick a year; and the ongoing viability of a colony depends on a delicately balanced marine habitat. In short, this means sandeels, the small, oily fish that are a staple diet for many seabirds, need to be in the right place at the right time for puffins to be able to feed their chicks. Not enough sandeels, or sandeels that have moved too far away from puffins’ breeding grounds, and their pufflings will starve to death in their burrows.

He is puzzled that there has been little action or policy response from the government to the plight of Scotland’s puffins. Just four key seabird sites in the UK – Skomer, the Isle of May, Fair Isle and Canna – receive government funding for seabird monitoring and, a lack of resources delayed the 10-yearly seabird count for several years.

The trawling of millions of tonnes of small oily fish, such as sprats and sandeels, for farmed fish and animal feed is another human impact that has denuded once prey-rich seas of the sustenance on which all seabirds rely. Birkhead was so alarmed by the recent loss of funding for his uniquely long-lived Skomer study that he has resorted to crowdfunding to meet the cost of training and paying researchers so it can continue.

Puffins have two distinct phases of their lives: four months on land to breed, with the rest of the year spent out at sea. So, the wider challenge of protecting puffins, says Wood, is that they need the north Atlantic ocean to be healthy enough to support the fish stocks on which they feed all year round. And while researchers stand a decent chance of counting seabirds when they are near their breeding colonies, working out where they are feeding while out at sea, what kind of fish they are catching and where in the water column those fish are shoaling, is far more difficult (for which, read expensive). Meanwhile, there is widespread concern that climate change could be affecting seabird survival in a variety of subtle and intermeshing ways.

“A quarter of Pembrokeshire’s puffins died over the winter of 2013-14 – that’s about 5,000 birds,” says Wood. “They’re tough creatures that can cope with stormy weather, but a conveyor belt of extreme storms stopped them feeding out at sea. It must have been like living in a washing machine.” Tens of thousands of seabirds across Europe starved and were washed ashore. These seabird wrecks happen from time to time, but Wood says that if the predictions of more frequent and extreme storm events come true, and seabird wrecks become more common, “that might become more of a problem for puffins”. Add in shifting fish distributions, oil pollution and the peril of plastic buildup in the oceans and it is easy to see how seabirds are facing ever-greater threats.

While the Skomer puffins may be sitting pretty, anxiety about their less fortunate cousins is now so urgent that researchers and environmental organisations are pulling out the stops to find out what interrelated factors could lie behind the fluctuating numbers. Puffin specialist Dr Annette Fayet from the University of Oxford is about to follow up her recent study tracking overwintering puffins out at sea by attaching tiny GPS locators weighing just four grams – and costing £700 apiece – on to the backs of Skomer puffins to work out exactly where they are fishing for food for their young. Funded by National Geographic and Sky, she will be doing the same at puffin colonies in Iceland and Norway, where populations have also nosedived. Her results, she hopes, will influence governments’ marine policies. While the ultimate goal would be to get governments to address the deeper causes of climate change – maybe in time to save the planet – it is perhaps more realistic to hope that politicians may one day be brave enough to set up extensive fishing bans in areas where seabirds go to feed.

The search for puffins on Skomer Island –video

At the RSPB, Owen is bidding for funding to extend the scope of the charity’s Project Puffin initiative, which ran last summer. It combined tracking of puffins in the Shiant Isles and Shetland with crowdsourced “citizen science” information on the species; securing the new funding would allow teams of trained researchers to source data on where puffins are feeding all around the UK, and from Norway, Iceland and the Faroe Islands. Working at this sort of scale is exciting, Owen explains. “If you can standardise monitoring methods across a big area, the data becomes very powerful.”

There is no doubting the dedication of the researchers on Skomer, or their determination to secure the best information about what is happening to the seabirds who return each spring and work hard to fledge their single chick. After a 17-hour day mostly spent crawling on her hands and knees, being bitten by shearwaters and pooed on by puffins, Baker will get up again at 5.30am to attempt to ring lesser black-backed gulls. After lunch on the hoof, she will go out again, among the puffins and the shearwaters, and she will spend the evening on painstaking data entry. It all helps to build a consistent record of seabird activity on this magical Welsh island, the sloping grassy cliffs of which are, this summer, stuffed with puffins.

Everyone is hoping that it stays that way – and that Scotland’s puffin numbers revive. For now, though, if you want to be sure of seeing a puffin in all its breeding glory, you might want to head west.

This article was first published by The Guardian on 20 Jun 2018.