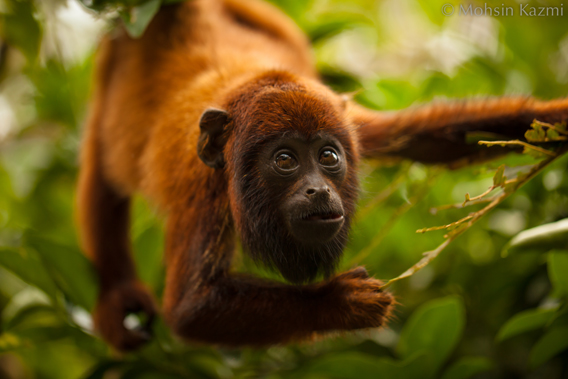 Watching a new video by Amazon explorer, Paul Rosolie, one feels transported into a hidden world of stalking jaguars, heavyweight tapirs, and daylight-wandering giant armadillos. This is the Amazon as one imagines it as a child: still full of wild things. In just four weeks at a single colpa (or clay lick where mammals and birds gather) on the lower Las Piedras River, Rosolie and his team captured 30 Amazonian species on video, including seven imperiled species. However, the very spot Rosolie and his team filmed is under threat: the lower Las Piedras River is being infiltrated by loggers, miners, and farmers following the construction of the Trans-Amazon highway.

“Most people think of the rainforest and they picture animals everywhere, but in reality, even in healthy forest, you could walk all day and see nothing,” Rosolie told mongabay.com in a recent interview. “But the camera traps show a different view. The footage not only allows us to better understand what species visit the colpa and when, but it allows us to observe natural behavior: tapir and deer visiting with their young, birds and deer sharing the copla, the ocelot tracking an agouti.”

A collection of camera trap images from a four week study in the Madre de Dios region of Peru, presented by naturalist and explorer Paul Rosolie. This video is part of a growing movement to raise awareness about the lower Las Piedras River which is currently under threat from increasing logging activity. If protected, the lower Las Piedras would create ecosystem connectivity between world class protected areas such as Bahuaja-Sonene National Park, Manu National Park, and Alto Purus National Park. Along with wildlife and primary forest, the Las Piedras is home to some of the last remaining uncontacted tribes on Earth.

This video shows a very rare encounter. The short eared fox is one of the least understood mammals on Earth. How many of them are there? Where do they live and how? These are questions that still remain largely unanswered. In a ten year study, researchers from Duke university visited an incredibly remote region of jungle to study the short eared fox (or dog) and only were able to trap five individuals in ten years. Handheld footage of wild individuals is virtually non-existent.