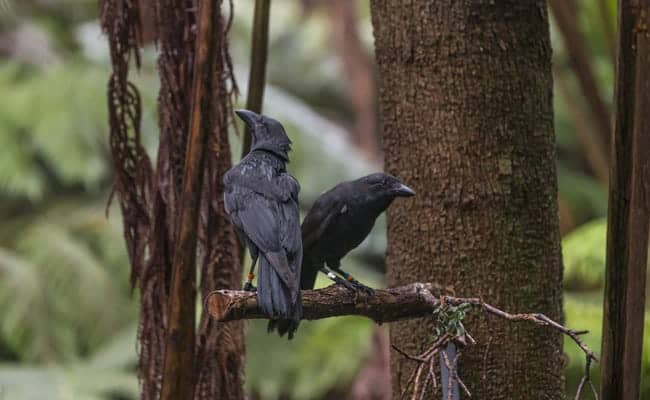 Birds are building nests everywhere this spring, but for a pair of critically endangered crows in Hawaii it’s an especially big deal – it’s the first time they’ve made one in the wild in 20 years.

The ‘Alalā was once widespread throughout Hawaii, but a combination of threats ranging from habitat loss, disease and non-native predators to conflict with farmers drove their population down at an alarming rate.

Although they were declared extinct in the wild, a captive breeding program had begun years earlier and many have been hatched and raised at the Keauhou and Maui Bird Conservation Centers as part of a partnership between the State of Hawaii Department of Land and Natural Resources Division of Forestry and Wildlife, San Diego Zoo Global, and the U.S. Fish and Wildlife Service.

Thanks to the dedicated efforts of conservationists, a small group of these crows is back in their forest home on the Big Island. Over the past two years, the ‘Alalā Project has released 21 birds.

In what’s now an even more promising sign that the efforts to help them recover are paying off, two of them have built a nest.

Last month, two birds, Mana’olana and Manaiakalani, were seen beginning to build a nest platform structure near the site they were released at in 2017, and the female has started what appears to be sitting behavior.

Although it’s still just a nest – researchers aren’t sure if there are eggs in there – it’s still brought a lot of cautious optimism that they may yet establish a truly wild population.

“While it’s difficult to see exactly what’s in the nest from observations on the ground we do believe that Manaiakalani is likely sitting on eggs and we’ve observed her male partner, Mana’olana bringing her food regularly,” said Dr. Alison Greggor, Postdoctoral Research Associate, with the Institute for Conservation Research, San Diego Zoo Global.

According to the ʻAlalā Project, these crows typically lay between three and five eggs and will incubate them for an average of 21 days. If these eggs hatch, the chicks would be the first ʻAlalā hatched in the wild in two decades.

In another promising sign, a second pair, Kiaikumokuhalii and Ola, have also been seen beginning to build their own nest. Although the ʻAlalā Project notes that there are still a lot of obstacles, first time parents aren’t always successful, and it may take a few tries before they successfully fledge chicks, the recent activities are still bringing hope these birds will once again thrive in their native home.

“Hawaiian forests are family; there is a shared ancestry among the people, plants, animals, and landscapes. By returning the ʻAlalā to the wild, we are welcoming home a family member that has been away for a long time” said Rachel Kingsley, Education and Outreach Associate for The ʻAlalā Project. She continued, “The fact that these birds have been able to build a nest on their own shows that these birds are comfortable in the forest they live. Our family is growing.”