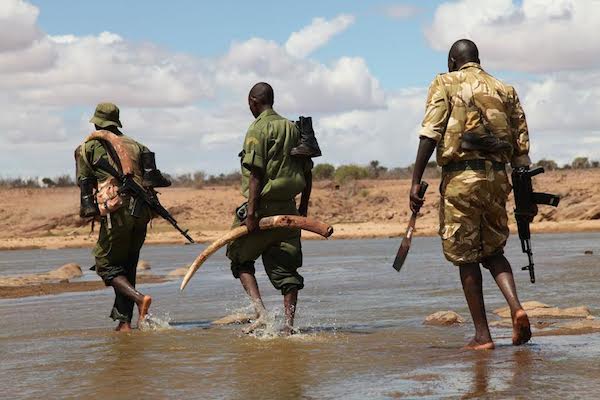 Elephants are worth 76 times more when they’re alive than dead, according to a new analysis released this past weekend. The report follows on the heels of findings by WWF that the world has lost 50 percent of its wildlife over the past 40 years, with more than half of African elephants killed for ivory in just one decade.

The analysis, conducted through the David Sheldrick Wildlife Trust’s iworry campaign, compared the value of elephants to local economies to profits netted through the illegal ivory trade. Between January and August 2014, researchers tallied approximately 17.8 metric tons of ivory seized worldwide, harvested from 1,940 poached elephants. Most of these seizures occurred in Kenya, Gabon, China, and Vietnam, countries identified by CITES as doing relatively little to stem the tide of black-market ivory.

In their report, iworry estimated the raw-ivory value of a poached elephant to be $21,000. In contrast, a living elephant is worth more than $1.6 million over its lifetime, largely because of its eco-tourism draw. The report lists travel companies, airlines, and local economies as benefitting from this largess of the world’s largest land mammal, whereas the ivory trade may fund criminal and terrorist groups.

“The value of elephant tourism is extremely high, with a living elephant worth a shocking 76 times more alive in the savannah than in the market place,” said Rob Brandford, iworryc ampaign director. “Protecting Africa’s elephants makes monetary sense and in the long term elephants are worth more alive roaming the world’s savannah and forests than their tusks are sitting on a mantle. That’s a powerful argument to convince policy makers.”

The seizure of 17.8 metric tons of ivory is likely just a drop in the bucket. The report states that developed countries intercept only about 10 percent of contraband good such as ivory, meaning that up to 178 tons of ivory may have been trafficked this year—the result of 19,400 elephants killed.

Before the advent of plastic, ivory was commonly used to make cutlery handles, piano keys, and other consumer goods with. While some of the global demand for ivory was satiated with the dug-up tusks of extinct mammoths, more often it was sourced from living animals. Numbering between three and five million in the 1930s and 1940s, global ivory demands for consumer goods decimated African elephants (genus Loxodonta) throughout Africa, with the continent’s entire population halved during just the 1980s. Some populations of elephant have declined more than others, with Chad’s elephants declining from 400,000 in 1970 to 10,000 in 2006—or more than 97 percent.

In response to the massive decline, CITES banned international trade in ivory in 1989, eliminating major ivory markets and slowing decline. However, declines still continue, and scientists estimate 23,000 African elephants were killed for their tusks in 2013 alone. The driving force behind the killings is high demand from East Asian countries, such as China.

“These findings aren’t definitive but they are shocking and make it clearer than ever that we must recognize the value of our wildlife and environmental heritage in order to pass policies that safeguard against their destruction,” Brandford said. “Referring to wild animals as economic commodities has created controversy in the past but where policy is determined by the value of an object, it’s time to give the elephant a fair footing.”

According to the report, the slaughter of elephants so far this year has amounted to an economic loss of more than $44.5 million.

“In order to secure the long term future of the species, it is vital Governments understand the tangible benefits elephants can bring,” Brandford said. “Given the overlap of ivory poaching locations and elephant tourism operations, every elephant killed makes these regions much less profitable.”

This article was first published by Mongabay.com on 06 Oct 2014.