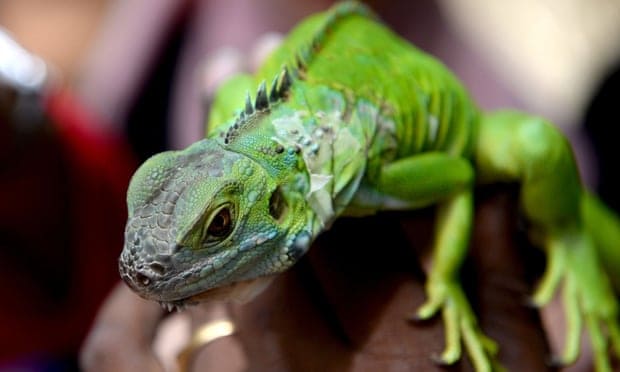 From Key West’s high-summer Hemingway Days, in which bearded hopefuls vie for the title of best Papa lookalike, to the annual hunt for the elusive (and imaginary) skunk ape, Florida is renowned for its calendar of curiosities.

Now another bizarre date has been added to the list: tag your reptile day.

Owners of tegus, a non-native species of giant central and south American lizard, and green iguanas, another prolific invader, must get their reptiles microchipped like any conventional pet.

Seeking compliance with a regulation passed in February to protect against invasive species and which came into effect this weekend, the Florida fish and wildlife commission (FWC) has established tag day, actually a series of dates in the coming weeks at venues around the state.

“Just as with cats and dogs, microchipping your green iguana or tegu is one of the simplest and most effective ways to keep them safe while also protecting Florida’s native wildlife,” said Kristen Sommers, FWC head of wildlife impacts management.

The microchipping days, sure to raise eyebrows in the waiting rooms of veterinarians’ offices, are part of a 90-day grace period. After that, tegus and green iguanas must be permitted and chipped.

A further three-month period will allow owners time to comply with new requirements for outdoor caging, which also apply to the other 14 non-native species covered by the new regulation, including Burmese and other species of pythons, green anacondas and Nile monitors.

“These animals are creating enormous issues for our state,” said the FWC chairman, Rodney Barreto, of regulations meant to reduce the release of nuisance species into the wild.

“I have always been proud that Florida is looked at as a leader. Let’s take a bold stance. We have to put our foot down. The time has come, and we hope other states will follow.”

Florida has about 500 non-native species, many of which have caused massive damage to a sensitive ecosystem. Among the worst offenders are Burmese pythons, which have run rampant in the Everglades and other waterways, depleting stocks of deer, rodents and wading birds.

The Argentinian black and white tegu, which can grow to the size of a dog, has become problematic particularly in the south of the state. Since 2012, at least 7,800 have been found dead or removed from the wild by FWC staff or hunters.

Green iguanas can grow to more than 5ft and weigh up to 17lb. According to the FWC, they cause damage by digging burrows that erode and collapse sidewalks, foundations, seawalls, berms and canal banks.

The agency encourages the humane killing and removal of both species in the wild.

Some who keep the creatures as pets are not so welcoming of the new regulations.

“This is absolutely ridiculous,” one owner, Marie Lewis, posted on the Hernando Reptile and Exotics Rescue Facebook page. “We are all being punished for idiot caretakers. I understand the possibility of invasive species but some of us actually care for our reptiles.”

This article was first published by The Guardian on 3 May 2021. Lead Image: A state official said ‘microchipping your green iguana or tegu is one of the simplest and most effective ways to keep them safe’. Photograph: Arun Sankar/AFP/Getty Images.

We invite you to share your opinion whether Florida’s invasive reptiles should be culled? Please vote and leave your comments at the bottom of this page.