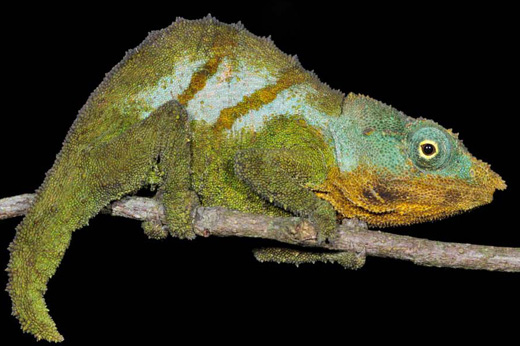 Google Earth has spurred the discovery of another new species. In this case, the creature is a pygmy chameleon, one of four previously unknown Rhampholeon chameleon species described from the remote ‘sky islands’ in Mozambique. The Mount Mabu pygmy chameleon (Rhampholeon maspictus) was discovered after Google Earth images of a tract of forest led Julian Bayliss, a consultant for Fauna & Flora International, to launch a scientific expedition to the region.

The chameleons are an indication of the region’s biological richness, which has been poorly documented until now, according to Bayliss.

“The biodiversity of the high altitude mountains of northern Mozambique is only starting to be explored and we are finding many new species from most taxonomic groups,” he said in a statement. “This is just the start, and we expect many more new discoveries in the future.”

Mount Chiperone, Mount Inago, Mount Mabu and Mount Namuli are part of the Afromontane Archipelago, a series of mountain chains and isolated mountains that runs the from Ethiopia to South Africa.

“Cloaked in forest, grassland and heathland habitats, this mountain archipelago is known to harbor rich biological diversity along its length – so much so that almost every new biodiversity survey seems to reveal new species,” explained a release from Fauna & Flora International, which went on to add that it is working to establish a reserve in the area to protect forests from encroachment, subsistence agriculture, and hunting.

Over the years, researchers using Google Earth have made a variety of discoveries, ranging from identifying previously unknown habitats like a reef off Australia to surveying fish catches in the Middle East.

Brilliant…I love their camouflage. what a fantastic discovery.