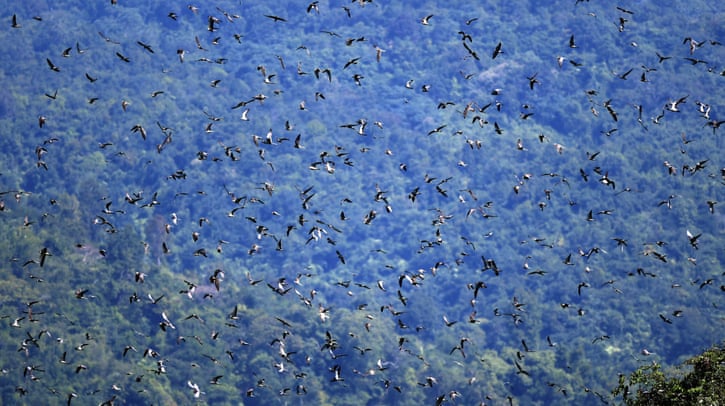 It is Sunday in Kohima, the capital of Nagaland, and like many Naga, Gwasinlo Thong has spent the morning in church. A tall, elegant man in a crisp navy suit, he hands over a bag of guava from his garden as we sit down to talk. “When I was a child we used to hear tigers roaring in the forest around our village,” he says, over a cup of sweet milky tea. “But even in my lifetime the birds and mammals have disappeared.”

One of the seven states that make up India’s tribal north-east, Nagaland’s mountains form a jagged spine along the Indo-Myanmar border. Home to the Naga, Tibeto-Burman people made up of an estimated 70 tribes, it is part of the Indo-Burma “biodiversity hotspot”, one of 36 such regions identified globally. Ninety-two species of mammal have been documented here, as well as 490 species of butterfly, 500 species of bird and 360 species of orchid. But Thong, a local conservationist, isn’t the first person to bemoan the disappearance of wildlife.

While the Naga have always had famously omnivorous tastes (“We Naga eat anything that moves, apart from humans!” jokes Thong), historically their animist beliefs meant killing was not taken lightly. “There was a real affinity with nature – the concept of exploitation of wildlife was absent,” says Bano Haralu, the director of the Nagaland Wildlife and Biodiversity Conservation Trust. “People hunted with spears and traps, and nobody hunted for commercial purposes.”

The turning point came about 30 years ago when a perfect storm of guns, unemployment and cultural shifts led to a dramatic loss of biodiversity. Key to this was the Naga’s decades-long struggle for independence from India, a conflict that has cost an estimated 200,000 Naga lives.

“Insurgency brought guns into the region, which were then used for hunting,” says Haralu. As young Naga moved to towns in search of work, their relationship with nature was severed. “With no jobs, they began to look to the forests for a quick buck instead – only now they were using guns rather than spears and traps. I’ve met people who’ve killed 80 hornbills in one expedition,” she laments.

At the same time bushmeat – traditionally shared out with clan and family members – became something to make money from. One Sumi Naga hunter says he recently sold a Sambar deer at the market in Kohima for 30,000 rupees, about £300. That is more than many Naga earn in six months.

Chinese medicine has also played a part. As demand increased in the 80s, Naga began selling everything from tiger bones and bear bile to wild ginseng, geckos and cordyceps. With Indian and Burmese middlemen buying pangolin scales for 8,000 rupees a kilo, the animal’s numbers plummeted.

In 1998, after noticing a catastrophic drop in wildlife, Khonoma, an Angami Naga village just south of Kohima, set aside 25 sq km of forest as a community conservation area, banning all hunting and logging within its borders. Soon other communities began to follow suit.

One of these is Yaongyimchen, a Phom Naga village perched high in the mist-wreathed mountains of eastern Nagaland. In 2010 the villagers established the Yaongyimchen Community Biodiversity Conserved Area,setting aside 10 sq km of forest as a refuge for wildlife.

Their biggest success is the Amur falcon, a small, resilient raptor that undertakes a mammoth 14,000-mile round trip each year between its breeding grounds in north-eastern Asia to where they winter in southern Africa. They pause at sites across Nagaland to feast on flying termites and rest before crossing the Arabian Sea.

In early November, at the peak of the autumn migration, the skies above Yaongyimchen are stippled black with birds. Nuklu Phom, an intense, godly man at the helm of the local conservation efforts, says the falcon’s numbers have increased tenfold since the hunting ban of 2010. “Around 50,000 used to roost here each spring and autumn,” he said. “But now we have at least half a million. They know it’s safe here.”

Yimti, a 35-year-old Phom Naga, used to shoot around 700 falcons over the course of each migration, selling them for the equivalent of £1 each in the local market. Now he earns £3 a day as a labourer. Given the financial temptations, I asked Nuklu how he stopped people hunting. “We explained that the falcons were God’s creation, like humans. And that farmers in southern Africa were waiting for them, and would suffer if they didn’t arrive. With the help of the village elders, people listened.” Now anyone caught hunting has their gun confiscated and is fined 25,000 rupees.

The hunting ban has also benefited other fauna, and the area is a safe haven for bears, leopards, 85 species of bird, 15 species of frog, and – Nuklu thinks – a lone tiger, an animal thought to be extinct in these hills.

As many as a third of Nagaland’s villages now have conservation areas, all of them initiated and managed at grassroots level. Churches have organised gun amnesties. Bushmeat is no longer openly on sale. All over the state villagers have donated land to community conservancies. While young men with guns and catapults are still a common sight across the state, the tide is turning.

As wildlife slowly returns to these areas, villagers are seeing that their actions matter, that real change can happen when communities work together.

“I used to take my gun and catapult to the jungle,” says Ivito, a 47-year-old Sumi Naga from the Tizu Valley Biodiversity Conservation and Livelihood Network in central Nagaland. “Now I’ve sold my gun to pay for my children’s education, and I patrol with my binoculars instead.”

Ivito, like many others, hopes eco-tourism will replace the income he used to make from hunting, but so far only a handful of tourists have braved the bad roads. For those who do make the effort, however, the rewards are huge.

This article was first published by The Guardian on 10 March 2020.