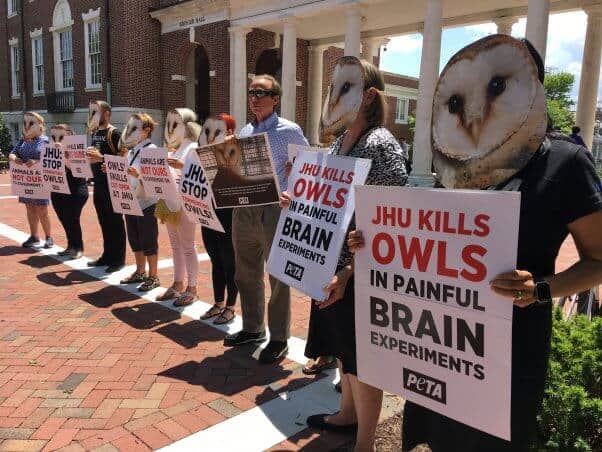 Wearing owl masks and blasting audio recordings of screeching owls taken inside a Johns Hopkins University laboratory, a group of PETA supporters gathered outside the office of Johns Hopkins experimenter Shreesh Mysore and called for an end to his abuse of owls.

Mysore cuts into barn owls’ skulls to expose their brains, screws and glues metal devices to their heads, forces them into plastic tubes so cramped that they can’t even move their wings, keeps them there for up to 16 hours, clamps their eyes open, and bombards them with sounds and lights.

He pokes electrodes around in the brains of fully conscious birds, mutilating their brain tissue so severely that the animals become “unusable” to him—at which point he kills them.

This owl is one of many imprisoned in Shreesh Mysore’s basement laboratory, where he cuts into their skulls and screws metal devices onto their heads in curiosity-driven experiments that have no relevance for human health.

He claims to be studying human attention deficit disorder (ADD), even though barn owls don’t suffer from the condition and their auditory and visual systems differ vastly from those of humans.

“PETA is calling on Johns Hopkins to stop pouring money into cruel experiments that contribute nothing to treatments for humans.”

Mysore has received more than $1 million in funding from the university and $1.3 million from the National Institutes of Health. Let’s get these gruesome experiments ended today.

This article was first published by PETA.org on 26 June 2019.

Why don’t you take brains from experimenters and do the same to them!

publicize the names and contact info of thescum doing this.

EXPERIMENT ON THE ASSHOLES SITTING ON DEATH ROW!

The government makes these experimenters millionaires by paying them to do these insane things which have never produced a cure for anything. They get paid with your tax dollars. It is a way for these experimenters to get rich. Oh, and they do not pay taxes on the money they are paid.

These experiments have NO VALUE once so ever on the well being of humans. This is nothing more than animal abuse. This person should be charged.

This is really a reprehensible thing to do to innocent beautiful owls. Johns Hopkins should be ashamed.

Sick dirty bastards! Give him a taste of his own medicine!

Stop these horrible experiments on defenseless wildlife. The do not have the right to do this to anyone or anything. Stop their funding and shut them down now.

What are they going to learn from this? Nothing. A different species physiology is different than a human being. Just more of a horrendous waste of our taxpayer dollars for these poor animals to be tortured.