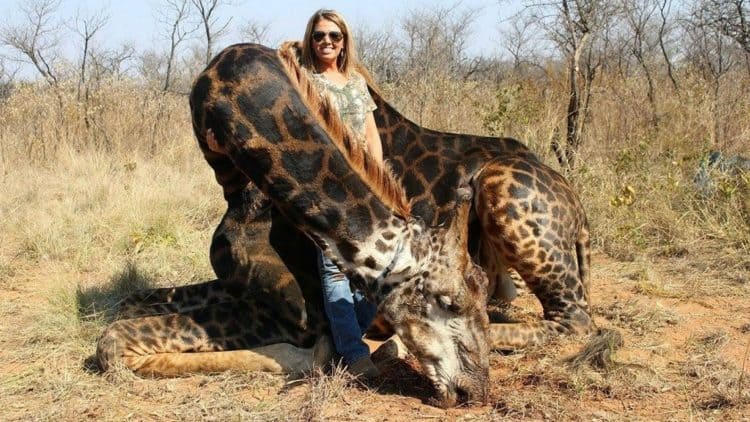 American trophy hunter Tess Talley gained notoriety from a now-deleted Facebook post showing her smiling over the body of a rare black giraffe she had gunned down in South Africa.

She’s feeling the heat again after appearing in a CBS News segment bragging about the decorative pillows and gun case that she had made out of the endangered species’ skin.

“I got the gun case made, and I have decorative pillows made out of him, and everybody loves them,” she laughed.

Following the segment, Talley sat down with CBS This Morning to try to defend trophy hunting. As expected, she spouted hunters’ well-worn soundbites about “conservation” and “preserving the wildlife,” but when asked to explain how trophy hunters actually help animals, she came up empty-handed.

“The money from ‘conservation hunting,’ as you describe it, is a paltry sum compared to wildlife tourism,” countered co-host Tony Dokoupil.

“So the argument isn’t the strongest. If you say joy, you say you enjoy it—that I understand. The conservation part doesn’t add up.”

In the middle of a rambling, grasping explanation, Talley finally blurted out, “I’m not a conservationist—I’m a hunter.”

EXCLUSIVE: Hunter Tess Talley is speaking out for the first time since her photo of a giraffe she killed in South Africa in 2017 prompted worldwide outrage.

In a new CBSN Originals documentary, @adamyamaguchi followed her as she tracked a wildebeest on a wildlife ranch. pic.twitter.com/94Qc52KIAg

For once, we’re in complete agreement.

This article was first published by PETA on 10 June 2019.