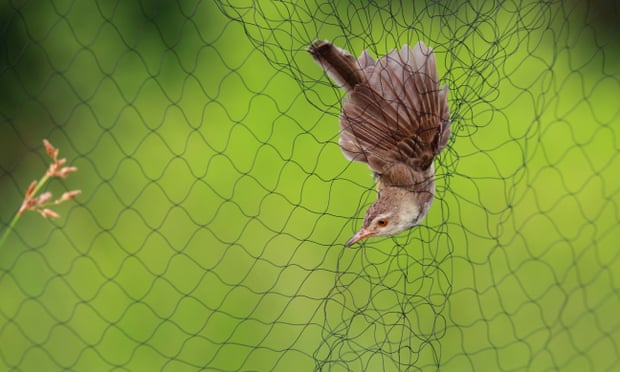 A battle broke out at the weekend over a hedge in Lincolnshire. The hedge, near the town of Winterton, was covered in netting by Partner Construction, which has applied for planning permission to build 40 homes on the site.

This is standard practice, the developer said, in order to prevent birds from nesting in a habitat that might be damaged if building work begins later in the year.

However, a group of local residents opposed to the development released a video showing birds trapped beneath the nets. Jeremy Vine and Chris Packham shared the footage, and their outrage, on Twitter.

Packham said the nets showed “brutal ignorance” of how to look after the countryside, and said, if he were there, he would “rip those nets down”, in a tweet that has since disappeared. According to the Telegraph, some of the offending nets have now gone.

The Wildlife and Countryside Act 1981 makes it an offence to intentionally “take, damage or destroy” the nest of any wild bird while it is in use or being built. In theory, this even bans people from pruning their fruit trees if doing so harms a nest that they know is there.

Any tree or hedge becomes a protected site the moment a bird settles in it, which it might do at any time from about February until August – potentially shutting down an entire construction site for the busy half of the year.

Many conservationists agree to compromise. Netting an empty tree or a bush in the winter is certainly better than making the birds look for a new site in the middle of the breeding season. “It’s not ideal,” says Martin Fowlie of the RSPB, “but it is legal, so when it has to be done, it’s important that it be done properly, which means checking for birds when the netting is fitted, and to keep checking it regularly. Birds are ingenious creatures, and they can often find a way to get under the edge of a net.”

Builders must compromise by taking this part seriously. Dave Leech, head of ringing and nest recording schemes at the British Trust for Ornithology, accepts that netting is “probably the lowest-impact option if a habitat has to be removed during the breeding season.” But done badly it might be worse than nothing. “A well-protected nest site is a good thing,” Leech says, “so if you have limited access it might actually be attractive to birds, but they may then get trapped inside afterwards, so you’ve got to exclude access completely.”

A spokesman for Partner Construction told the Telegraph: “We commissioned properly qualified and experienced ecologists to carry out the work on our behalf. They have assured us and provided photographic evidence there were no birds in the hedgerow after it was netted and that the cover was left in a secure condition, preventing birds from gaining access.”

This article was first published by The Guardian on 04 Mar 2019.

We invite you to share your opinion whether it is cruel to set up nets that prevent birds nesting? Please vote and leave your comments at the bottom of this page.