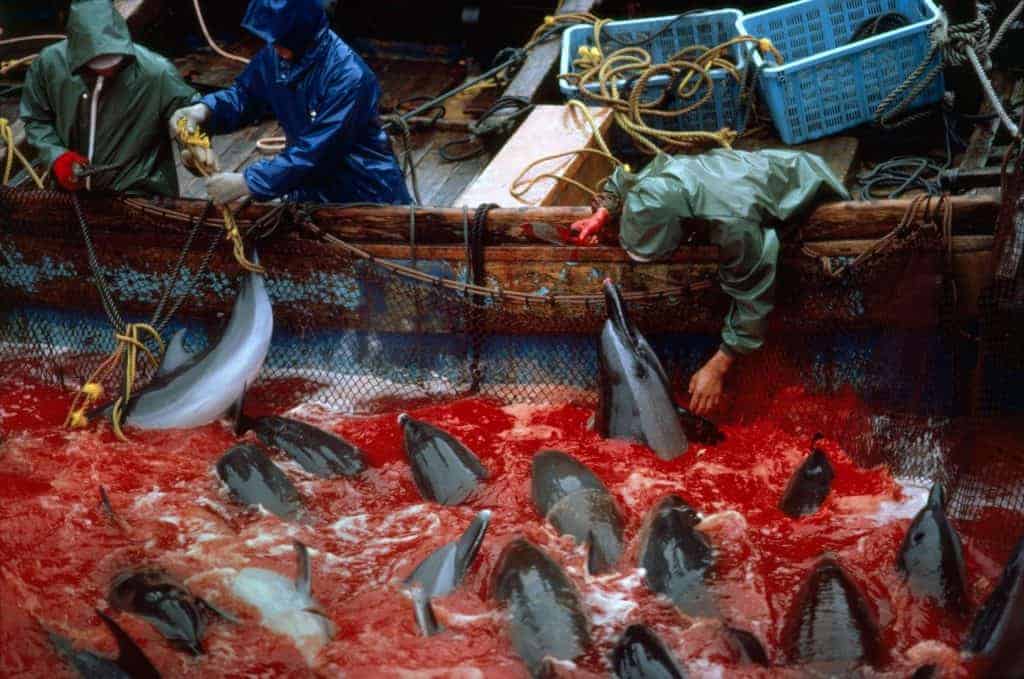 Taiji is still in darkness when a dozen men gather at the quayside and warm themselves over a brazier. While the rest of the town sleeps, they sip from cans of hot coffee, smoke cigarettes and talk in hushed tones.

As soon as the sun edges above the peninsula, they take to their boats, steering out to sea in formation in search of their prey: the dolphin.

It has been eight years since the Oscar-winning film The Cove propelled this community in an isolated corner of Japan’s Pacific coast to the centre of a bitter debate over the pursuit of dolphins for human consumption and entertainment.

The film’s graphic footage of dolphins being slaughtered with knives, turning the surrounding sea a crimson red, shocked audiences around the world.

Unaccustomed to international attention and wrong-footed by their social media-savvy opponents, the town’s 3,200 residents simply went to ground. Requests for interviews with town officials went unanswered; the fishermen took a vow of silence.

But after years of keeping their counsel, Taiji’s fishermen have finally spoken out, agreeing to talk to the Guardian about their work, their whaling heritage, and their determination to continue hunting dolphins.

“We’ve mostly stayed silent since The Cove, and that’s why our point of view was never put across in the media,” says Yoshifumi Kai, a senior official with Taiji’s fisheries cooperative.

Kai attributes that reticence down to what he claims are attempts by activists from Sea Shepherd and other conservation groups to manufacture confrontations, which they film and post online, and challenges claims that the practice of slaughtering dolphins beneath tarpaulin sheets is proof that he and his fellow fishermen have something to hide.

“Activists say we are concealing something because we know that what we are doing is immoral, but that’s nonsense,” he says. “You never see cattle or other animals being slaughtered in public. It’s not something you do out in the open.” 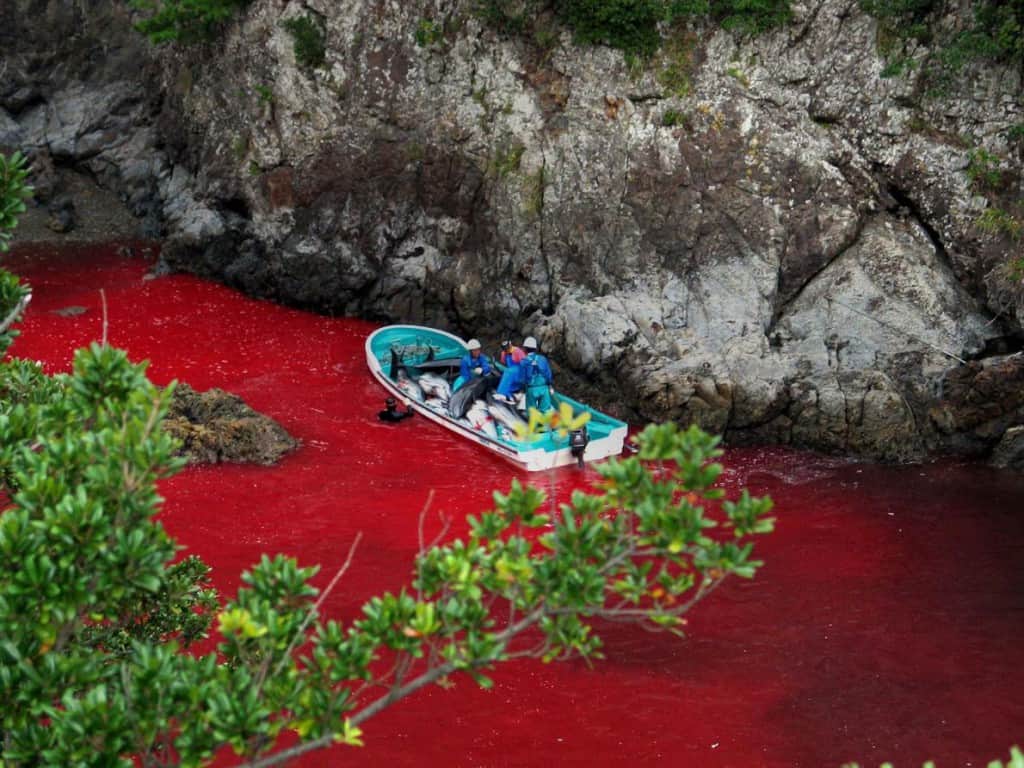 The earliest recorded coastal whale hunts in Taiji can be traced back to the early 1600s. Scrolls on display in the town’s whale museum depict dozens of boats decorated with symbols taken from Buddhism and Japan’s indigenous religion, Shinto, in pursuit of a whale big enough to sustain the entire community for months.

“Foreign activists ask us why we kill these cute animals, but we see them as a vital source of food, even now,” says Taiji’s mayor, Kazutaka Sangen. “When I was a boy, a third of the town would turn out to greet a whale being brought back to shore, because they were desperate to eat its meat. We are grateful to the whales – we want Westerners to understand that.”

By killing dolphins and other small whales, fishermen are continuing a tradition that enabled their ancestors to survive before the days of mass transport and the availability of other sources of nutrition, adds Sangen.

“We couldn’t grow rice or vegetables here, and we had no natural water supply. We needed to kill whales to eat, and hundreds of people died doing so. This was a very difficult place to survive, and we will always be grateful to our ancestors for their sacrifice. It’s because of them that we are all here today.”

For Sangen, everything in Taiji – from services for elderly residents to education and tourist infrastructure – depends on the income it makes from the sale of dolphins to zoos and aquariums. Several times during the interview he refers to kujira no megumi – literally, the blessing of the whale. “Whaling enables this town to function,” he says.

Typically, fishermen pursue pods of dolphins across open seas, banging metal poles against their boats to confuse their hypersensitive sonar, before herding them into a narrow inlet. There, they are either slaughtered for their meat or selected and sold for large sums to aquariums and marine parks.

While dolphin meat for human consumption generates only modest profits, Taiji’s fishermen can reportedly sell a live specimen to brokers for about 8,000 US dollars. A fully trained dolphin can then fetch more than 40,000 US dollars if sold overseas, and about half that in Japan.

The 20 or so Taiji fishermen who take to the sea between September and April to hunt bottlenose dolphins, pilot whales and other small cetaceans have been emboldened by the release of Okujirasama (A Whale of a Tale) – a documentary by the New York-based filmmaker Megumi Sasaki that counters what she describes as The Cove’s one-sided treatment of a complex issue.

While making her film, Sasaki concluded that the debate over Taiji is an irreconcilable clash of cultures – between the global, and Western-led, animal rights movement and local traditions steeped in religion and ancestor worship.

‘Whaling is the glue that holds this town together’

“If dolphins are so important to the local community, then why kill them – that’s what many Westerners can’t understand,” Sasaki says. “But we think of animals as a resource, not that they are special creatures that can do things humans can’t do. It’s a totally different way of thinking. Whaling is the glue that holds this town together – it’s inseparable from local identity and pride.”

Kai dismisses claims that that he and other fishermen employ a singularly cruel method to kill the dolphins. “The way we work has changed with the times,” he says. In response to criticism, fishermen now dispatch the animals by inserting a knife into their neck, severing their brain stem – a method he claims is the most humane possible, but which some experts have said does not result in a painless or immediate death.

On a recent morning, the seafront in Taiji is free from confrontation, although activists have tweeted their regular early-morning photos of the banger boats heading out to sea.

The fishermen appear to have reached an uneasy truce with overseas campaigners, first from Sea Shepherd, and now from the Dolphin Project, a group formed by the dolphin trainer-turned activist Ric O’Barry.

But there is still little interaction between the two sides. “They don’t want to listen, only to provoke us,” Mitsunori Kobata, president of Taiji’s dolphin-hunting association, says over a dinner of minke whale sashimi and steamed rice flavoured with thin strips of whale blubber.

“They’re here to do whatever they can to obstruct our business, so we don’t see any point in engaging with them. They’re never going to change their minds, whatever we say.”

Pointing to slices of sauted meat, from the belly of a short-finned pilot whale, that he has brought from home, Kobata adds: “In the days when there was no refrigeration, people preserved meat like this in salt. Of course, there are lots of other sources of protein around these days, but people of my generation and older still have the right to eat whale if we want to.”

Both men hope Sasaki’s documentary will restore some equilibrium to a debate that has cast a shadow over Taiji for almost a decade.

They point out that they kill just under 2,000 small cetaceans a year, a tenth of Japan’s annual quota, adding that none of the species is endangered or covered by the 1986 global moratorium on commercial whaling.

“We’re not ashamed of hunting dolphins and would never consider stopping,” Kai says. “It’s the most important part of our local tradition.

“Just look around you … if we didn’t make a living from the sea, there would be nothing left. People keep telling us to stop whaling and find another way of earning a living. But what on earth would we do instead?”

We invite you to share your opinion whether Japan should be sanctioned for slaughtering dolphins and whales? Please vote and leave your comments at the bottom of this page.

Japanese should be brought to justice , the rest of the world is trying to care for the oceons and sea creatures whilst Japan just kills

The issue has to be studied like : how many dolphins is enough to sasietae their necessity in relation to the number of dolphins . How best to kill them so painwould be reduced. Finally to offer local men and women a diferent way of making a living. All these issues has to be addressed.first.

Yes, this is barbaric and disgusting. How can any human with a conscience think this is anything but evil. Pure evil, cruel and unnecessary.

It’s a no brainer… yes this must stop!!!! It’s absolutely horrendous to treat these beautiful, spiritual and peaceful animals in such a vile manner.

One wonders if the radiation from Fukushima will eventually bring extinction to that village through the very animals they claim a traditional right to slaughter.

This should definitely be stopped and forbidden.

Truly and appalling, debase, degenerative and atrocious industry in all its dynamics! Fresh protein is available through the innumerable supermarkets and the savaging of dolphins and whales is endorsed and approved by the Japanese government and local officials for financial gain. Seek other employment, stop the savagery on these sentient mammals. This is NOT a tradition it was established after WW11 when their was a shortage of meet. Whaling at sea was a tradition practiced by many cultures in small boats with spears. Now the Japanese have high powered harpoons and the whales do not stand a chance. Respect, dignity… Read more »

They could convert to whale and dolphin watching instead!

A disgusting crime against humanity – Shame on Japan – watch out for Karma!

Yes stop the madness. GO VEGAN WORLD! If you are against this but eat any animal you are nothing more than a piece of shit hypocrite.

I have never seen such total disregard for public outcry to stop this slaughter of Dolphins and Whales. The Whales keep our oceans clean and they are destroying them to extinction! No regard for the rest of the world! As with Dolphins, which the people have been polled and most don’t like dolphin meat, not to mention the mercury that is in the meat that the people may not even know. Shameful…

Governments must find alternative ways for people to live, for example crops. Also, population should be kept to one offspring per person in order to save the planet.

The only effective way to protest against Japans continued flouting of whaling bans, and slaughter of other sea mammals is to impose financial and trade sanctions. As a nation they cannot be ‘shamed’ as culturally they don’t care what anyone other than the Japanese themselves think of their behaviour, so shaming cannot work. This is why it is going on for so long. Time to work on our own governments to impose sanctions on Japan.