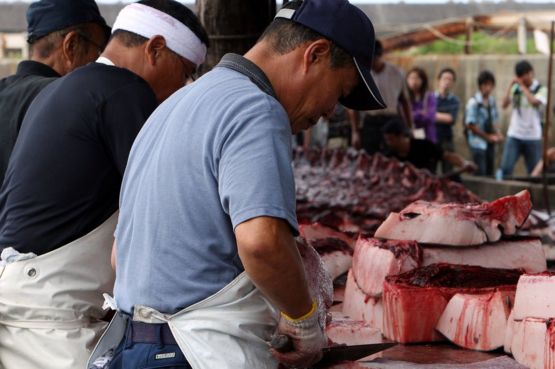 Hunting whales is irrelevant to feeding Japan’s population, draws global condemnation and is certainly not economic. So why does Japan still do it?

The answer from the Japanese government is that whaling is an ancient part of Japanese culture, that fishermen have caught whales for centuries, and that Japan will never allow foreigners to tell its people what they can and cannot eat.

One Japanese official once said to me: “Japanese people never eat rabbits, but we don’t tell British people that they shouldn’t”. I pointed out that rabbits are not exactly an endangered species.

Still, there is some merit to the government’s argument.

A number of coastal communities in Japan have indeed hunted whales for centuries, and continue to do so. Taiji in Wakayama prefecture is well known, many would say infamous, for its annual dolphin hunts. There are other places, in Chiba Prefecture and in Ishinomaki in northern Japan, that also do coastal whaling.

So, yes, coastal whaling is part of Japanese culture, like Norway and Iceland and the Inuit of northern Canada. But only Japan continues to sail a fleet of ships half way across the globe to hunt whales in the Antarctic and maintains a large factory ship that can process hundreds of whales at sea.

Nothing about these Antarctic whaling expeditions is historic. Japan’s first whaling voyage to the Antarctic took place in the mid-1930s but the really huge hunts didn’t get going until after World War Two.

Japan lay in ruins, its population starving. With the encouragement of General Douglas MacArthur, Japan converted two huge US Navy tankers into factory ships and set sail for the Southern Ocean.

From the late 1940s to the mid-1960s whale meat was the single biggest source of meat in Japan. At its peak in 1964 Japan killed more than 24,000 whales in one year, most of them enormous fin whales and sperm whales.

Today Japan can afford to import meat from Australia and America. There is no deep-sea commercial whaling in Japan. The fleet that is now hunting in Antarctic waters is paid for by Japanese taxpayers to carry out what the Japanese government describes as “scientific research”.

Japan’s other justification is that it needs to kill hundreds of whales each year to study them. But the International Court of Justice (ICJ) has systematically dismantled that argument. In 2014 it ruled that there was no scientific case for Japan’s programme of “lethal research” in the Southern Ocean, and ordered Tokyo to stop.

For a year Japan stopped. But last year it sent its fleet to sea again insisting, to widespread disbelief, that its new, smaller, Antarctic whaling programme satisfies the ICJ’s requirements.

Junko Sakuma used to work for Greenpeace in Japan. For the last 10 years she has been researching Japan’s whaling industry.

“There is no benefit to Japan from whaling…but nobody knows how to quit,” she tells me at Tokyo’s famously chaotic Tsukiji fish market, the biggest in the world renowned for its pre-dawn tuna auctions.

Of the thousands of fish wholesalers in Tsukiji only two still deal in whale meat.

At one stand we find a few large hunks of minke whale meat, deep red and oozing blood. At the next there are two long slabs of lighter-coloured fin whale meat, an endangered species its trading banned by CITES.

Business is bad, complains the stall owner. Last year Japan caught no whales in the Antarctic, so there is less minke whale meat available, he says.

If there is a whale meat shortage, the price should be soaring. But according to Junko it is not.

“The fact is, most Japanese people do not eat whale meat,” she says. “Consumption has been falling for years,” and adds that “even as the amount of whale meat decreases, the price doesn’t go up”.

According to Junko’s research, the average consumption of whale meat by Japanese people in 2015 was just 30g (one ounce) per person.

If eating whale is such an integral part of Japanese culture, why are so few eating it?

I turn to my old friend Etsuo Kato. Over the 20 years we have known each other he has, on occasion, tried to persuade me to eat whale meat with him. Kato-San grew up in Kita-Kyushu in western Japan, close to the big whaling port at Shimonoseki.

We are sitting in a cosy restaurant in Tokyo’s notorious red light district, Kabukicho. Above us hangs a very large, and rather ancient, mummified whale penis. On the wall are picture of whales.

The first plate to arrive is whale sashimi – it is raw. The owner points to the different delicacies; steak, heart, tongue and even raw whale skin.

My stomach turns, but I steel myself. Gingerly, I put a bit of raw whale steak into my mouth. It has a strong gamey flavour, chewy and fibrous. Next, I try the tongue. It is salty and fishy. Kato-San points to the heart. I politely decline.

“When I was a child I ate this every day,” he says. “Meat meant whale meat. I didn’t know what beef was, or pork. Steak was whale steak, bacon meant whale bacon.”

But if Japan stopped whale hunting you would be sad?

He looks at me smiling and gently shaking his head.

“I don’t need whale hunting” he says. “Once you have eaten beef there is no need to eat whale meat.”

The other customers in the restaurant are all middle-aged salary men. Eating a bit of whale meat is nostalgic, remembering school meals 50 years ago.

So I come back again to my original question: why does Japan still do it?

Recently I was at a private briefing with a high-ranking member of the Japanese government. Japan had just announced it was going to resuming whaling. I outlined to him why I thought it made no sense, and asked him to respond. His answer was astonishingly frank.

“I agree with you,” he said. “Antarctic whaling is not part of Japanese culture. It is terrible for our international image and there is no commercial demand for the meat. I think in another 10 years there will be no deep sea whaling in Japan.”

“So why not stop now?” asked another journalist.

“There are some important political reasons why it is difficult to stop now.” he said. He would say no more.

But Junko Sakuma thinks the answer lies in the fact that Japan’s whaling is government-run, a large bureaucracy with research budgets, annual plans, promotions and pensions.

“If the number of staff in a bureaucrat’s office decreases while they are in charge, they feel tremendous shame,” she says.

“Which means most of the bureaucrats will fight to keep the whaling section in their ministry at all costs. And that is true with the politicians as well. If the issue is closely related to their constituency, they will promise to bring back commercial whaling. It is a way of keeping their seats.”

It may seem incredibly banal. But Japan’s determination to continue whaling may come down to a handful of MPs from whaling constituencies and a few hundred bureaucrats who don’t want to see their budgets cut.

This article was first published by BBC News on 08 Feb 2016.

We invite you to share your opinion whether Japan should stop whaling? Please vote and leave your comments at the bottom of this page: