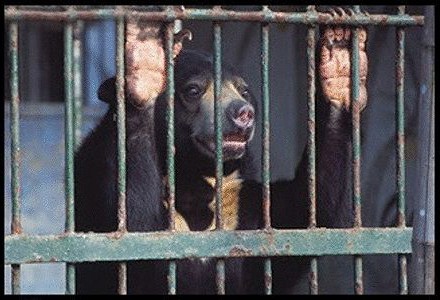 Wildlife campaigner Louis Ng is no stranger to close encounters with animals in distress.

But nothing quite prepared him for the emotional exchange with an adult bear outside a bear farm in Laos.

A film-maker had stumbled upon the farm and contacted Ng, the co-founder and executive director of Animal Concerns Research and Education Society (ACRES) in Singapore.

When Ng visited the farm in November 2009, he was greeted with the sight of a female bear lying motionless in a cage. The owner explained that she was refusing food and starving herself to death so he had left her outside to meet her inevitable end. Ng crouched near but a safe distance from the cage to watch her. Bear’s eyes were flooded with anguish and gentleness After a few minutes the bear, who was on her tenth day of hunger strike, pushed a limp paw through the cage bars and weakly flexed her claws in Ng’s direction. He realised with a start that she was reaching for his hand. And so he gave it to her.

The two ‘held hands’ in silence for a few minutes. Ng remembers the bear’s eyes being flooded with both anguish and gentleness. She died the next day. In a world where dignity is sometimes only delivered by death, this bear was the lucky one. She died after three years of living on that farm. But more than 12,000 other bears will serve up to ten years of their lives in similar farms throughout Asia where they are milked for bile to meet the region’s unsatiable demand for its healing properties.

Solitude, pain and fear drive bears mad “This farm had 29 bears in cages just large enough for them to stand up,’ Ng said. ‘All you hear when youS walk inside is the constant banging of heads against those cages.’ Solitude, pain and fear have literally driven the bears mad. Their only outlet is to ram their heads against their tiny prison cells or starve themselves to death. At this point anything is preferable to the horrific procedure of having their gall bladder drained of bile twice a day.

The medical use of bear bile dates back to the Tang Dynasty in 659 AD. Its only therapeutic component is ursodeoxycholic acid (UDCA) which makes up 15 per cent to 39 per cent of bile in bears compared to five per cent in humans. Bear bile was traditionally used for gastric bypass surgery and to treat minor ailments such as sore throats, sprains, as well as epilepsy. As the bile was taken from the intact gall bladders of bears killed in the wild, the absence of torture eased consumers’ minds.

Often they end up chewing off their own limbs But the supply was meagre and led to high prices on bear bile medicines. But then, in the 1970s, South Korea invented a method of extracting bile from live bears. It was cruel, excruciating and the golden ticket to a booming trade. ‘The bile is removed from the bear by inserting a catheter tube through a permanent incision in the abdomen and gall bladder,’ Ng said. ‘Sometimes a permanently implanted metal tube is used.’ Imagination eliminates the need to describe the pain that comes with this practice. Most bears are too weak or crazed to protest but those that do face a worse punishment.

‘One cub took a swipe at the farmer,’ Ng said. ‘The height of its cage was halved so it could only lie on its back. It soon started gnawing on its own paw which is what happens when bears lose their minds. Often they end up chewing their own limbs off.’ A 2010 report by wildlife trade monitoring network, TRAFFIC, found that while China is the prime origin for bear bile products in Asia, Malaysia is among a string of Asian countries that play the dual role of producer and consumer.

What most concerns Matt Hunt, chief executive of Free The Bears Fund in Australia, about the report is that a significant number of Malaysia’s TCM shops were found to be selling wild-sourced bear gall bladders. ‘This means that sun bears in Malaysian forests are being hunted to feed this trade,’ he said. Gall bladders cost as much as a packet of heroin According to Ng, the price of a gall bladder costs as much as a packet of heroin in the black market. Consumers fork out about £150 for 127g while one milligram of bile is priced at £12.50. Each extraction from a live bear yields 10 milligram of bile.

Malaysian shopowners and staff interviewed by TRAFFIC Malaysia revealed that a majority of the gall bladders sold were wild-sourced and that they were aware of its illegal status. This ambivalence is bad news for the Asiatic black bears, sun bears and brown bears, the three species who are hunted for their parts. Ng is now setting up a rescue centre in Laos on a five-hectare site with a 12-room building for volunteers and two enclosures measuring one hectare each to accommodate 29 bears.

Not only will the bears be rescued but they will also be put through a rehabilitation process to help them adapt to a community after being in solitary confinement for so long. The £320,000 facility is expected to be ready for volunteers by June. It will be a big step forward on a still long road towards saving Asia’s bear population.

We invite you to vote FOR or AGAINST the continuation of this cruel treatment to Malayan Sun Bears. Please vote and also leave your comments at the bottom of this page.

Save the Malayan Sun Bear from Extinction