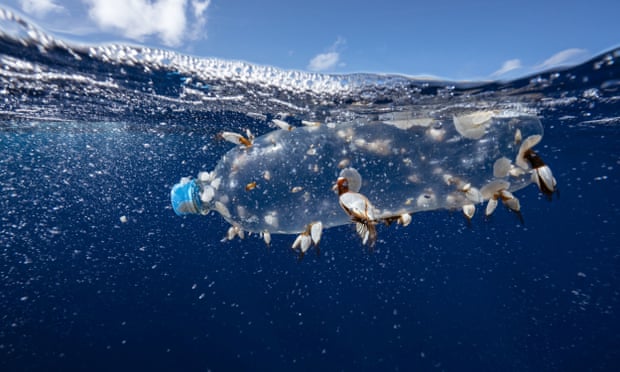 A young male sperm whale that was found dead off the coast of Spain had64 pounds (29 kilograms) of garbage in its digestive system. The 33-foot whale’s carcass surfaced in February near a lighthouse in Cabo de Palos on Spain’s southeastern coast. A necropsy revealed that the animal had trash bags, polypropylene sacks, ropes, net segments and a drum, among other things, in its stomach and intestines.

Local authorities said the animal died because of inflammation of the abdominal lining, or peritonitis. The amount of human trash in its system had become so enormous that the whale was unable to expel the garbage from its digestive system.

A picture shared by a local environmental group showed what appears to be a severely underweight sperm whale. Authorities said the animal weighed about 14,300 pounds, or seven tons. Male sperm whales, the largest toothed whales,could grow up to 90,000 pounds, or 45 tons. Adult female sperm whales are much lighter: 30,000 pounds, or 15 tons. They inhabit the deep ocean,can dive as deep as nearly 2,000 feet, and feed on large squid, sharks and fish.

After the whale’s death, government officials in Spain’s Murcia region, where the animal was found, launched a campaign to raise awareness of humans’ consumption of plastic and disposal of garbage in bodies of water. Consuelo Rosauro, natural environment director in Murcia, said the presence of garbage in seas and oceans threatens wildlife because many marine animals get trapped in the trash and ingest large amounts of plastic, which can be fatal.

Officials said the campaign includes cleaning up beaches in the Murcia region, gathering data about the type and quantity of marine litter, and educational presentations.

This wasn’t the first time a sperm whale turned up dead onshore, its body filled with trash.

At least 30 sperm whales have been found washed up on the beaches of the United Kingdom, the Netherlands, France, Denmark and Germany. Thirteen of them were found near the state of Schleswig-Holstein in northern Germany in 2016, according to National Geographic. A large amount of plastic waste, including fishing nets, a plastic car engine cover and remains of a plastic bucket, were found inside the whales’ stomachs.

Last month, a 29-foot sperm whale was found dead on Indonesia’s Lombok Island, east of Bali, though it’s unclear how it died.

In the Philippines, the group Greenpeace Philippines installed a 49-foot-long reproduction of a dead whale on the shore of the seaside town of Naic in the northern part of the country. The structure was made of bamboo frame. Pictures taken by local media show the “dead whale’s” gut spilling out, its mouth wide open and stuffed with plastic bottles.

“The ASEAN region’s contribution to plastic pollution in the oceans cannot be ignored and is already way beyond alarming,” Greenpeace Philippines’ Vince Cinches said, referring to the Association of Southeast Asian Nations. “We are asking the ASEAN membership to take this issue with a sense of urgency and demand that our leaders initiate bold steps to address plastic pollution through regional cooperation, corporate responsibility and massive public education.”

More than 5 trillion pieces of trash — and counting — are in the world’s oceans, according to a 2014study. Of that, nearly 270,000 tons of large and small plastic debris are on the surface. A study published last year found 83 percent of samples of water from more than a dozen nations were contaminated with plastic fibers.

This article was first published by The Washington Post on 11 Apr 2018.

We invite you to share your opinion whether marine life should be protected by banning single-use plastics? Please vote and leave your comments at the bottom of this page.

Editorial Comment: The purpose of this poll is to highlight important wildlife conservation issues and to encourage discussion on ways to stop wildlife crime. By leaving a comment and sharing this post you can help to raise awareness.