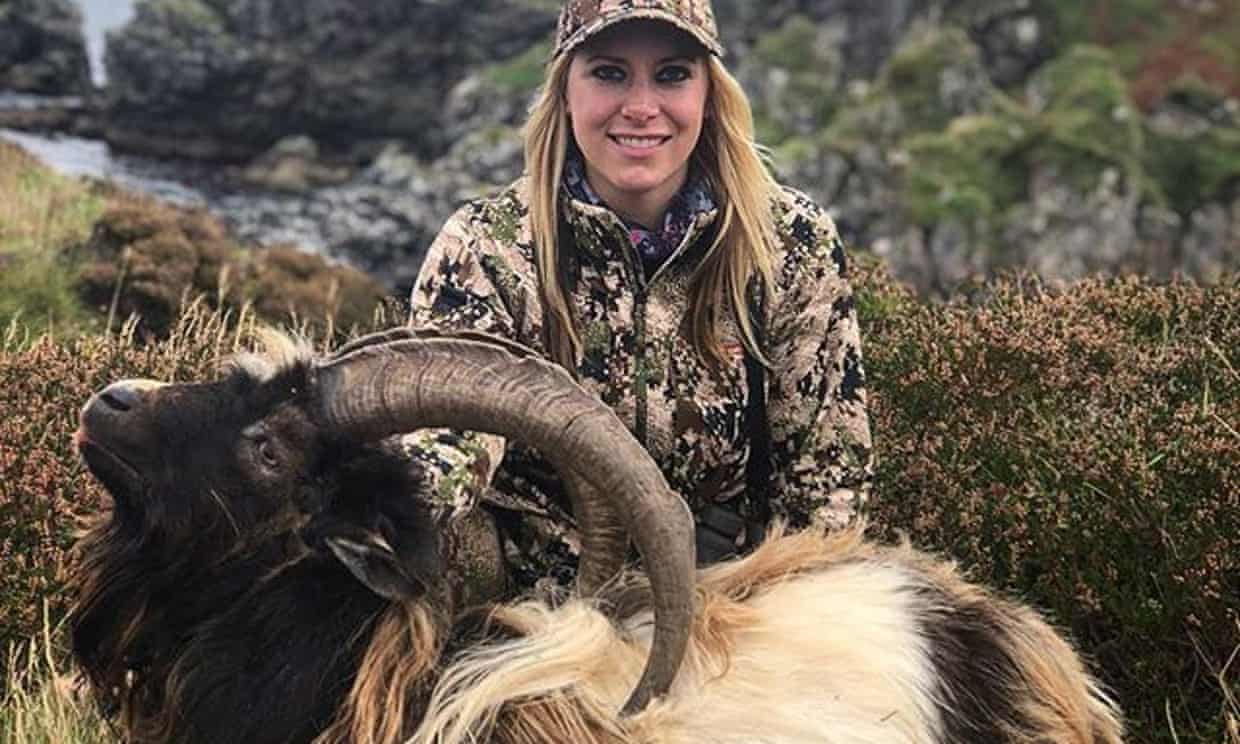 The Scottish government is to review the law around animal culling after an American TV presenter caused outrage by tweeting pictures of herself and a companion posing with a wild goat shot on Islay.

Larysa Switlyk, who describes herself as a “professional huntress”, posted a picture of herself smiling behind the animal. The image has been been widely criticised online with more than 2,800 people commenting on the picture.

In the tweet from her account the presenter of Larysa Unleashed on Destination America and World Fishing Network wrote: “Beautiful wild goat here on the Island of Islay in Scotland. Such a fun hunt!! They live on the edge of the cliffs of the island and know how to hide well.

“Made a perfect 200 yard shot and dropped him with the gunwerks and nightforce-optics ! (Good thing too because he could have ran off the cliff into the water).”

Another image shows a man posing behind a white goat, with the caption: “Congrats on Jason on his gold medal goat here in Scotland on Islay. A unique hunt.”

Twitter users condemned the images as “sickening” and “truly abhorrent”. The Scottish government said responsible and appropriate culling of some wild animals, including deer and goats, was not illegal.

Beautiful wild goat here on the Island of Islay in Scotland. Such a fun hunt!! They live on the edge of the cliffs of the island and know how to hide well. We hunted hard for a big one for 2 days and finally got on this group. Made a perfect 200 yard s… https://t.co/AnIVSloS9J pic.twitter.com/x2FzvTF7No

But the law is to be reviewed and Nicola Sturgeon, the first minister, tweeted: “Totally understandable why the images from Islay of dead animals being held up as trophies is so upsetting and offensive to people.”

She said the government would review the current situation and consider whether changes to the law were required.

Sarah Moyes, a campaigner for OneKind, which campaigns against animal cruelty, said: “It’s utterly shocking to see these images of Larysa Switlyk and other hunters posing for photos with the wild animals they killed on a recent trip to Scotland.

“Yet again, instead of celebrating Scotland’s magnificent wildlife, we are seeing these beautiful animals exploited in the name of sport.

“This is not the kind of tourism we should be encouraging in Scotland, let alone allowing to happen in the 21st century.”

A Scottish government spokesman said: “We fully understand why so many people find these images of hunted animals being held up as trophies so upsetting.

Dream stag right there Jason got with a narly drop time off his right side that looks like a baseball bat !! I shot it with a camera so it kind of counts ?? Hunting Scotland is unreal !!! @gunwerks @nightforce_optics @larysaunleashed https://t.co/9WPPBycKHm pic.twitter.com/z2j9qPCVuF

“Responsible and appropriate culling of animals is a necessary part of sustainable land management and the culling of some wild animals, including deer and goats, is not illegal.

“However, we understand the concerns caused by these images and, in light of them, the environment secretary will review the situation and consider whether any clarification of or changes to the law might be required.”

This article was first published by The Guardian on 25 Oct 2018.

We invite you to share your opinion whether Scotland should review its animal culling and trophy hunting laws? Please vote and leave your comments at the bottom of this page.

Of course, trophy hunting should be banned everywhere!