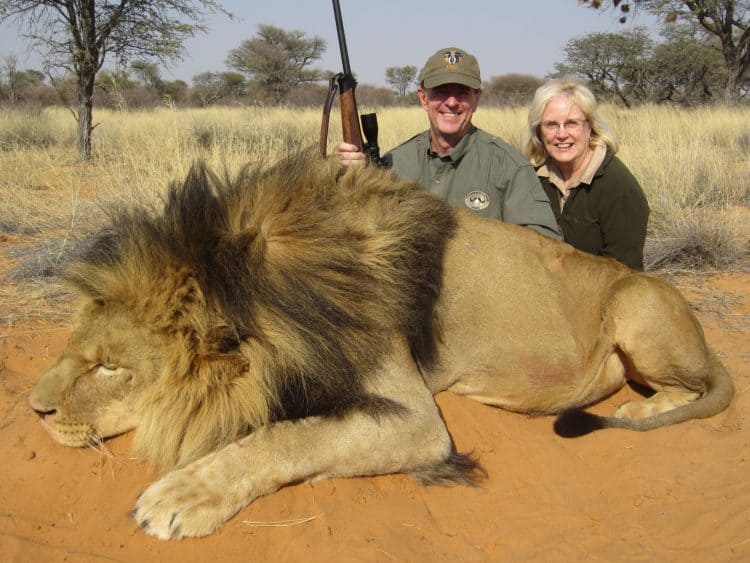 On June 7th, a trophy hunter shot a male lion in Umbabat Private Nature Reserve in South Africa, a part of the Greater Kruger National Park. Nothing surprising about this: around 500 lions, usually males, are killed every year by trophy hunters on the African continent.

What’s made this different is the suspicion that the hunter baited and killed Skye a beloved lion, the dominant male of Kruger’s so-called “Western Pride,” who has not been seen since June 7th. Also, one of Skye’s cubs was recently found dead, a common occurrence when other males take over a pride.

The hunter was U.S. citizen Jared Whitworth, on a trip organized by Graham Sales Safaris. This fact only came to light due to the investigative work of local journalist Don Pinnock. News reports say Whitworth allegedly paid nearly $80,000 for the hunt.

The Mpumalanga Tourism and Parks Agency (MTPA), which approved the hunt, has contended that the lion killed wasn’t Skye, but has offered no proof it was another individual. MTPA has also confirmed that the lion was baited, a fact that may run afoul of South African legislation. If the lion was Skye, his killing would break at least one South African regulation, given that the big cat – under six years old – was too young to be hunted. The MTPA has not responded to requests for information.

Hunting organizations are taking note of the incident. The International Council for Game and Wildlife Conservation (CIC), an international not-for-profit group that promotes hunting has “requested information” from South Africa. A spokesperson for the group said that if the hunt was illegal it would classify it as “poaching.”

“However, even, if the action was legal in South Africa, it could be violating policies of the CIC,” the group spokesperson said. The CIC recently severed ties with a couple organizations – the Professional Hunters Organization of South Africa, and the Confederation of Hunting Associations of South Africa – over the shooting of captive-bred lions

The CIC condemns illegal or unethical hunts, but noted that the world must in each case allow the hunter the chance to present the facts clearly and defend themselves.

“It is a scandal that irresponsible allegations made in social media, in particular, remain without consequence, if they turn out to be false allegations,” the CIC spokesperson said, alluding to cases in which trophy hunters often face backlash online and even death threats.

In light of a potential Skye scandal, the Humane Society of the United States and the Center for Biological Diversity (CBD), an environmental NGO, have sent a letter to the U.S. Fish and Wildlife Service asking it to reject U.S. importation of the mystery lion’s body.

“This lion was killed under dubious circumstances that should prohibit the issuance of any permit for the importation of the lion or its parts,” reads the letter. “This hunt further emphasizes the systemic problems with lion hunting in South Africa.”

In March, the Trump administration’s USFWS announced it would now consider African trophy importations on a case-by-case basis, overturning its long-held standard of making decisions based on the country, not on individual kills.

“If the lion hunt violated applicable protocols, then an import permit should not issue. Under such circumstances, the kill and import of the trophy does not enhance the species’ survival,” said Tanya Sanerib, CBD Senior Attorney and International Program Legal Director. The potentially violated protocol she referred to is a U.S. law requiring that any trophy hunt must “enhance” a species’ conservation.

“Moreover, if the hunt was not conducted in compliance with requirements in South Africa, then the importation of the trophy would violate the Lacey Act,” Sanerib added.

“At this time the Service has not been contacted by South Africa to assist in any investigation regarding this hunt. If we receive credible evidence that the lion in question was killed illegally, we could begin an investigation independently. Otherwise our authority begins when a hunter applies to bring the animal back into the United States. We process these permit applications on a case-by-case basis and cannot speculate on whether a permit would be granted,”a spokesperson for the USFWS said in a statement.

Sanerib says the USFWS’s new case-by-case trophy policy has left the public “in the dark,” as no one knows how these decisions are being made.

In March, the CBD sent a Freedom of Information Act request to the USFWS, asking about the criteria upon which trophy import decisions are now being made. Four months on, the agency has yet to respond.

If the MTPA approved a hunt for a different male, but Skye was shot instead, the CIC said the onus for the infraction falls on both the hunter and the outfitter, but primarily the latter.

The outfitter “must ensure that the visiting hunter is pointed out the target animal in accordance with legal requirements and ethical standards,” the CIC said.

Meanwhile, the South Africa Department of Environmental Affairs (DEA) says that it is “considering the allegations and will review all the relevant information and then make a decision on whether or not action will be taken” regarding the hunt.

To date, no independent observer has been allowed to see the body of the dead lion, which became the property of the hunter after it was shot. The lion’s skin is allegedly with Life Form Taxidermy in White River, South Africa, awaiting permission from the USFWS for import.

The CIC said that “cases such as Skye and Cecil are not helpful for hunting worldwide,” though they are “sometimes made bigger by media than they are in reality.”

“Such cases, unfortunately, are on the one hand often singled out to serve the main goal of anti-hunting entities, namely to stop all hunting, even if it is legal and sustainable, securing the livelihood of local residents and conserving wildlife populations. On the other hand, [such cases] might detect problem areas, which need corrective action,” the CIC said. “The anti-hunting sentiment is growing due to mainly the current inability of the hunting community to respond with good communications.”

The CIC believes that hunting, including trophy hunting, plays a direct role in conservation by bringing funds into fiscally strapped African nations to pay for land protection, ranger salaries and other conservation needs.

Lions are currently categorized as Vulnerable by the IUCN Red List, but that rating doesn’t fully reflect the severity of the great cat’s decline, say experts. The lion population in Africa has plunged by 42 percent in just over 20 years. Critics of lion trophy hunting argue that the killing of a single male lion can lead to a cascade effect in which more deaths follow, as new males take over the pride, kill cubs and harass, and sometimes even kill, the females.

This article by Jeremy Hance was first published by Mongabay.com on 13 Jul 2018.

We invite you to share your opinion whether trophy hunting of lions should be made illegal? Please vote and leave your comments at the bottom of this page.