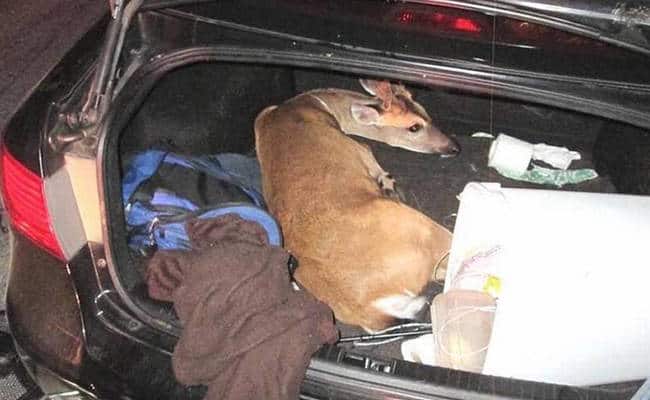 You think you’ve seen it all, but then you realize you really haven’t. In the Florida Keys, a routine traffic stop led police to discover something deeply disturbing: Two men had captured and hogtied three endangered Key deer.

On July 2, 2017, the men stuffed two of the deer in the back seat and one in the trunk.   If you’re wondering how anyone could fit three deer into a Hyundai Sonata, it actually wouldn’t be difficult. Key deer are small — about the size of a large dog. They’re also gentle, inquisitive creatures.

Because humans don’t hunt this species — and they have no other natural predators — they’re not afraid of us. There are even reports that Key deer have tried to walk into people’s homes.

It would have been no challenge to grab three of these tiny deer, truss them up and toss them into a car. And that’s allegedly what happened in this case.

When police pulled over Erik Damas Acosta and Tumani Anthony Younge in the middle of the night on Big Pine Key, they were driving with a broken license plate light. Fairly quickly, though, the officers saw two Key deer does struggling in the back seat and a buck tied up in the trunk.

The arrest warrant issued by Florida Fish and Wildlife noted that the deer “had wounds all over their body and head and were struggling to break free. Blood was soaked into the seats and deer hair was heavily scattered throughout.” Clearly, this ordeal frightened and hurt the animals badly.

Authorities released all three deer, but kept an eye on them in the wild for a few days. It became apparent that something was wrong with the buck, unfortunately.

The Florida Fish and Wildlife Conservation Commission (FWC) recaptured the buck and took him to a veterinarian for x-rays. There they learned he had a broken leg. And that sad news meant their was no choice but to euthanize him.

“It’s unfortunate and it had to be done to ease its pain and suffering,” National Key Deer Refuge Manager Dan Clark told The Miami Herald.

According to the arrest reports, the men told investigators they took the deer because they “wanted to take pictures with” them. Now, because of such stupidity, one of those innocent deer is dead.

There are only about 600 to 800 Key deer left. This subspecies of white-tailed deer lives on a few islands in the Florida Keys, from Big Pine Key to Sugarloaf Key.

“We’re still waiting to find out from the federal side if they’ll be charged,” FWC Officer Robert Dube told The Miami Herald. He explained to The Sun-Sentinel that in his 28 years of investigating wildlife crime in southern Florida, “this is the first time I’ve seen someone do this to Key deer, to tie them up. I would hate to speculate what they were going to do with them.”

What is the matter with people? Can’t they leave nature alone? Do we need interesting selfies so badly that we’re now resorting to animal kidnap to make it happen? We have laws against this sort of crime. And now we’ll see how well they really punish alleged perpetrators.

Urge Benjamin G. Greenberg, acting U.S. attorney for the Southern District of Florida to charge and prosecute these men federally under the Endangered Species Act by signing this Care2 petition.

Take their Vehicles and Licenses away for 5+ Years with a Stiff Fine and Jail!!!!!!!!.

“We have laws against this sort of crime. And now we’ll see how well they really punish alleged perpetrators” F&W Officer Dube told the Miami Herald. That’s all we really all want to know. Obviously the sentence has to be severe & well publicized enough to deter others from risking abusing these animals.

it is weak men who injure animals!

I hope these Barbartians get huge fines and long jail sentences – they had something evil in mind and not selfies – They need to be held 100% accountable for taking these innocent deer – I hope the judge throws the book at these scumbags – If they are here illegally – deport them after they serve their sentences! also confiscate their car – these guys are hiding the truth – why were the deer bloody – what did they do to them and what were their future intentions? If it was for selfies – they would have done that… Read more »

Appalling men! What drives such brutality?

the capacity our species has for “stupid does” never ceases.

wake the f*ck up, homo crapiens, and learn to respect our brother species as well as your own…time is running out!!!!

ROTTEN SCUMBAGS – hope they get their just deserts!

3 Guys kidnap 3 deer for selfies? Methinks there is something far worse going on here, possibly perverse. I hope there is a strong case against them with the strongest convictions attached.

arrest this asshole put in jail