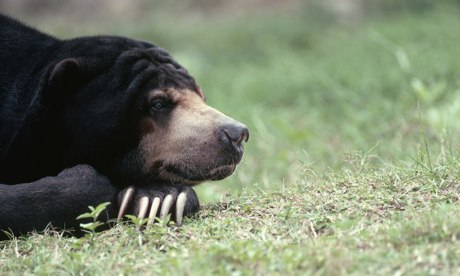 Like a proud dad, Siew Te Wong’s office walls and desk are covered in baby pictures, but unlike ordinary infants these possess four-inch claws and a taste for insects and honey. Wong, a leading sun bear researcher, has a heartfelt passion for the world’s smallest bear that is as big as the problems facing the species.

The sun bear (Helarctos malayanus) lives in south-east Asia, Sumatra and Borneo and was first listed as “vulnerable” on the IUCN’s “red list” of threatened species in 2007. Traffic, the wildlife trade monitoring network, said in 2011 that the sun bear population was suspected to have declined by more than 30% in the past 30 years. Deforestation, uncontrolled exploitation for trade and illegal poaching were named as major causes.

Named sun-bear man by the local Malayan press, Wong is working hard to raise awareness of what he calls the “forgotten bears species”. The Bornean Sun Bear Conservation Centre, nestled next door to the Sepilok Orangutang sanctuary in Sabah, Malaysia, is set to be the first of its like in the world. Due to open to the public on 16 January, it will focus on animal welfare, education, research and rehabilitation.

“We need the public, from all levels, to understand the importance of the rainforest,” says Wong. “I think education is fundamental because sun bears are still lacking in terms of the conservation work and research. And a lot of that boils down to the fact that people do not know about the species, people do not care about the species.”

WWF says that the global demand for palm oil has been a major driver in the level of deforestation seen in Indonesia, while Greenpeace warns that Indonesia is planning for another 4m hectares of pam oil plantations by 2015, in addition to the existing 6m.

When asked about palm oil, which is used in a variety of food products from margarine to biscuits, Wong sighs and says: “Yes, but again, who causes it? You and me. You know, we are responsible.” He points to human population growth and the demand it creates for more resources and the destruction of habitat that, in turn, threatens wildlife.

Despite the species being protected by law for decades, Wong thinks more can be done to enforce wildlife law – the maximum penalty is five years in jail or 100,000 ringgit (almost £20,000) or both. “It’s always considered not to be a priority,” he explains, “so the law is rarely being enforced and sometimes people don’t know that it’s actually against the law.”

He tells stories of encounters with villagers keeping sun bear cubs as pets; “oh, my grandfather used to have two bears, my father used to have one bear, why can I not have one bear?” and shocking use of the bear’s paws for food, a dish he tells me that was once considered an Emperor’s dish. “If you Google bear paw stew you can actually find recipes on the internet. They teach you how to cook bear paw stew, can you believe that?” he shakes his head incredulously. “It’s crazy. Absolutely crazy.”

This article was written by Ami Sedghi for the Guardian.

Among the piles of reports on his desk, horror stories of bears squashed into tiny cages, being farmed for their bile, Wong picks up a picture of him in his younger years with a rescued sun bear cub after its mother was killed by poachers. “I just cannot turn a blind eye,” he says, glancing at the image. “Even though the number may not be great, it has to be taken care of.”