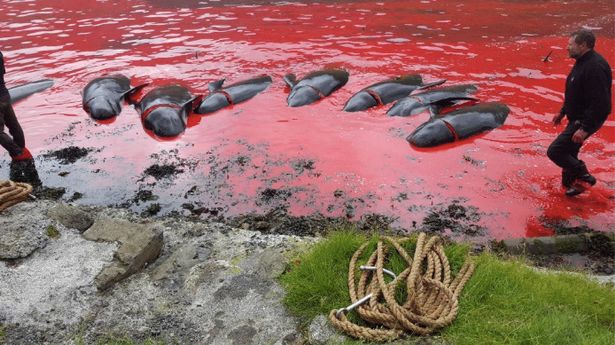 Ten pilot whales were slaughtered in the first hunt of the year in the Faroe Islands, with campaigners worried that 2021 could be a particularly bloody year with whales and dolphins slaughtered with knives on the green list country’s beaches

Hundreds of people will be taking part in months of animal slaughter in a green list country which has left horrified tourists in tears.

Campaigners calling for an end of the notorious bloodshed in the Faroe Islands, known as Grindadrap, said 10 pilot whales have already been killed this year – with spontaneous hunts set to continue for months.

In one sickening show of defiance last month, the head of a killed pilot whale was impaled on a giant fish hook sculpture in the town of Hvannasund, grim pictures show.

Each year, campaign group Sea Shepherd sends crews to observe the killings, with sickening pictures showing the sea turn red as whales and dolphins are hacked to death in the shallow water.

The first hunt of the year has already taken place, with 10 pilot whales, and animal lovers feel this summer will be particularly bloody after nearly 600 animals were killed last year despite coronavirus restrictions.

Pods of whales and dolphins are guided by boats and jetskis towards the shore, where groups including children are waiting with knives ready to kill them.

It can take upwards of 20 minutes for animals to die, and whales and dolphins endure the horror of seeing their relatives killed in front of them.

Horrific footage seen by the Mirror from previous hunts shows blunt hooks being rammed into whales’ blowholes before knives cut through the animal’s neck, turning the water red with blood.

But for the first time, campaign co-ordinator Robert Read told the Mirror, native Faroese people are joining Sea Shepherd crews – raising hopes that the tradition, which dates back to at least the 16th century, can finally be abolished.

He said: “The Faroese see it as an activity that gives them a national identity, but it’s not unique to them. There were pilot whale hunts in the Shetlands until around 100 years ago.

“It’s continued from some misguided sense of national pride, but all it does is damage their national image.

“It’s not done to feed people, it’s not done to bring in any income, it’s done simply because they’ve done it for such a long time, which is one of the most ridiculous arguments there is.”

He said whale meat is filled with mercury, making it hazardous to eat.

Last year’s efforts to monitor the slaughter were hampered by the pandemic, but Covid-19 did not stop the slaughter of pilot whales and dolphins.

The majority of hunts happen between June and September, when whale migration patterns mean pods travel close enough to be driven to the land.

“The Faroe Islands pretty much shut its borders, but they carried on in defiance of their own Covid rules though,” Robert said.

The territory is part of the Kingdom of Denmark, and campaigners are calling on the Danish government to outlaw the brutal tradition.

Robert said that the organisation is growing in support in Denmark, with Danish crews carrying out key monitoring duties – and he is hopeful that a Faroese chapter can open to oppose the slaughter.

He explained that hunts are spontaneous, with local foremen sending out text message alerts when pods are spotted close to the shore, and members – who have often undergone only a few hours of “training” – gather on the shore at 26 killing bays.

“These aren’t professional whalers, some of them have never been on a hunt before,” he said.

Often the slaughter unfolds in front of unsuspecting tourists who have no idea what they are witnessing, Robert said.

“People have been touch saying they have been in tears after seeing it, it is very distressing,” the campaigner stated.

Last month the Faroe Islands was among 12 countries and territories included on the UK government’s ‘green list’ – making it an attractive option for tourists as they do not have to quarantine on their return.

But people who travel there are required to prove they have a “worthy purpose” for travelling there and isolate for 10 days even after proving a negative test before arrival.

Sea Shepherd is calling on the Faroese and Danish governments to outlaw the hunts, hoping the damage to the country’s image will impact on the country’s tourist industry.

This article was first published by The Mirror on 6 June 2021. Lead Image: Graphic footage shows the sea turned red after dolphins and whales are slaughtered in the Faroe Islands (Image: Sea Shepherd).