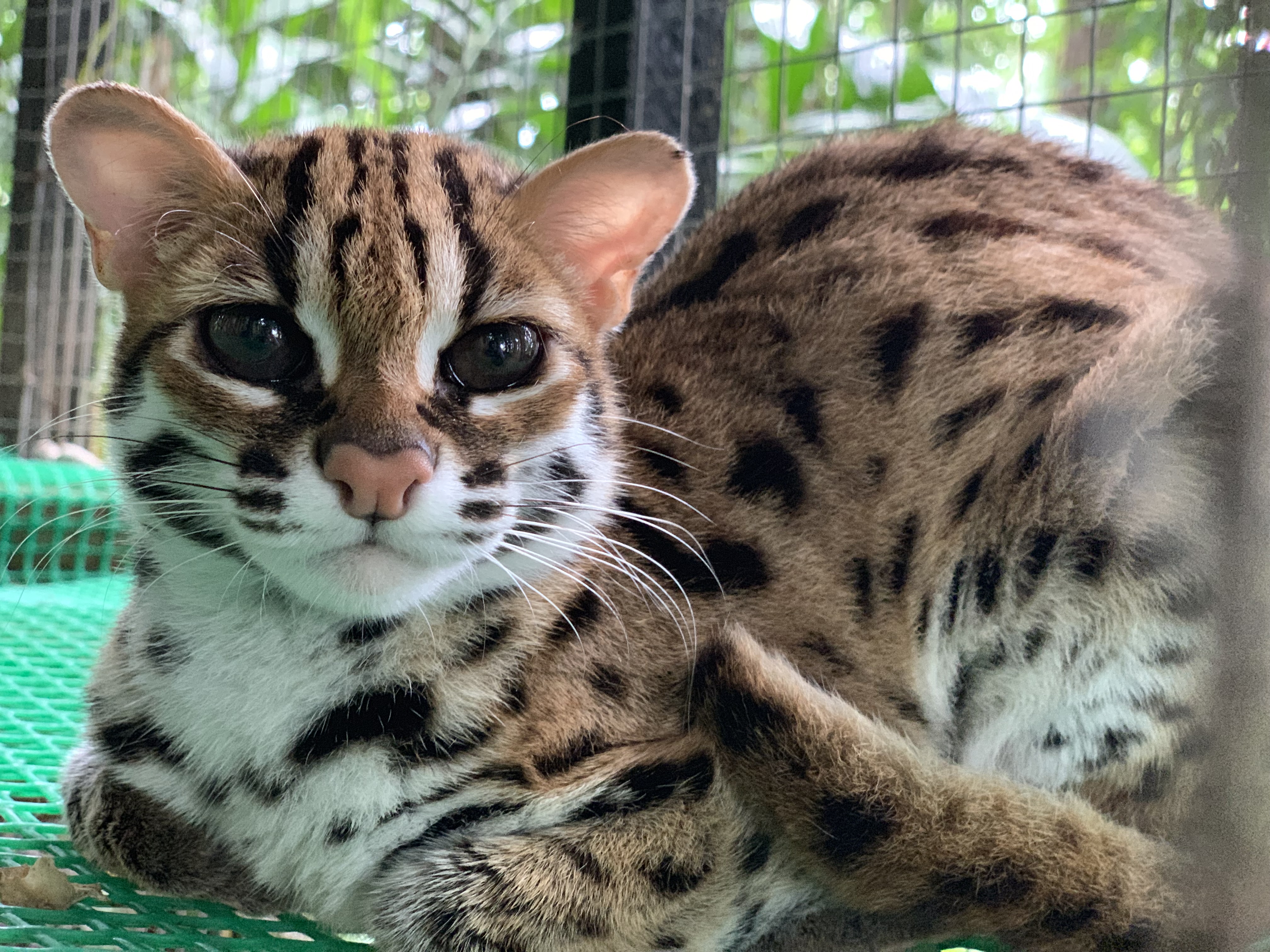 ILOILO, Philippines — A pig growled in pain. I walked up to the enclosure of sharp, rusty metal grill to see a Visayan warty pig (Sus cebifrons), known locally as baboy talunon, crouched on the ground, with another pig biting its back. The wounded pig squealed again and ran around the enclosure.

“The wounded pig might be a victim of the alpha male,” said J.B. Ian Bull, the resident veterinarian at the Mari-it Wildlife Conservation Park. “He has been killing the male warty pigs to assert his position in the herd.” Bull added that a few months earlier, the aggressive male warty pig broke out of his enclosure and “murdered a family of a pig.”

Aggression among animals in closed spaces, especially warty pigs, is common in the conservation park, Bull says. The park started out as a breeding facility and eventually became a rescue center for species saved from foiled attempts at poaching and trafficking.

Mari-it, from the West Visayan word that means “dangerously enchanted,” is a refuge for many endangered species endemic to the central Philippine group of islands known as the Visayas. These are species facing food shortages, habitat loss and even extinction as a result of deforestation and hunting. The 1,000-hectare (2,470-acre) conservation park occupies land owned by the West Visayas State University-College of Agriculture and Forestry (WVSU-CAF) in the village of Jayubo in Lambunao, a town in the province of Iloilo. The area features a small mountain surrounded by various endemic plant species and waterfalls, a natural habitat of many of the native species, making it a perfect location for the park.

It was started more than 25 years ago, after then-project manager Lucia Lastimoza saw three live spotted deer being sold by highlanders in town to be killed and cooked as sumsuman, a side dish served during a drinking session. “Why would they slaughter these beautiful animals?” Lastimoza recalled asking herself. “I bought them with the intent to take care of and breed them.” She placed them in a pig enclosure at the WVSU-CAF facility, spruced up to suit the needs of the spotted deer.

In 1993, Lastimoza was invited by the IUCN to train in wildlife conservation and management, and when she returned to the Philippines she established the conservation park. Today, Mari-it is home to 17 endangered Visayan spotted deer (Rusa alfredi); 38 critically endangered rufous-headed hornbills (Rhabdotorrhinus waldeni) and Visayan hornbills (Penelopides panini); 11 critically endangered Visayan warty pigs; five vulnerable Visayan leopard cats (Prionailurus bengalensis rabori); and two critically endangered Panay cloud rats (Crateromys heaneyi), among others. The animals, saved from wildlife trafficking, poaching and encroaching on residential areas, come from various parts of the island of Panay in the Visayas, and are feared to go extinct within five to 10 years if left in the wild.

For decades, Mari-it enjoyed sufficient funding; it was once the largest hornbill breeding facility in the world. But things changed nearly six years ago when funding ceased, precipitating a management decision that would put the animals’ welfare in jeopardy.

The park was supported technically and financially by various international animal conservationists and organizations until 2014. When the money stopped coming in, the Lambunao municipal government stepped up and allocated a million pesos ($25,000) for the park’s operations every year. “But this amount is not enough to cover the food supply for the animals, the maintenance of infrastructure, and the number of skilled staff to take care of the animals,” said Bull, who also acts as the park’s assistant director.

Ensuring an adequate supply of the appropriate food for the wide range of species at the park is challenging. Though the majority forage on insects, smaller animals and plants, the Visayan hornbills and leopard cats demand a very specific diet. “Hornbills’ food requires to be rich in carotene, Vitamin C and carbohydrates,” Bull said. “These are the necessary vitamins … Otherwise, they are not capable of breeding.” When food gets scarce, hornbills tend to abandon their eggs. Meanwhile, the leopard cats, carnivores that mainly feast on rodents in the wild, are fed chickens that the park raises on its own poultry farm.

When food supplies run low, the caretakers, who treat the animals as they might their own children, chip in. “Sometimes, we use our own money to buy their food,” said caretaker Myra Cabayao. But even the caretakers haven’t been spared from the funding slash: there were five of them working at the park in 2014, but today there are only two.

Animals in captivity also require bigger enclosures to avoid confinement-specific stressors, which lead to the kind of aggressive behavior seen among the warty pigs. “Most of the existing cages at Mari-it have limited space and in [dire] need of maintenance. The [enclosures] are covered with rust and are weak [with age] that some animals easily destroyed the fences to escape and return to the wild,” Bull said.

Ideally, the conservation park seeks to nurse its animals back to health with the hope of eventually releasing them back into the wild. But outside, human threats persist, says Lastimoza. To create an environment fit for these species to thrive there’s a need for a thorough education campaign at the grassroots level, adequate policy measures to protect the species, and consistent surveillance mechanisms — none of which come for free.

“There is a need to conduct biodiversity survey, GIS mapping, development of site management, and habitat restoration where these animals should be released,” Lastimoza said. “Other than that, the community must also be involved and educated about wildlife conservation. These entail money.”

The group previously sought to reintroduce some of the animals back into their natural habitats. In 2010, Lastimoza was in talks with the local government to turn Sicogon Island, spanning 1,100 ha (2,720 acres) in northern Iloilo, as a refuge for the hornbills and spotted deer. This fell through, however, after the local government opened the island for commercial use in 2013, leasing it to a major developer for a prime tourism project.

All these factors have taken their toll on the park. “The dearth of funding may mean the death of the conservation park,” Bull said. “This situation puts the animals at risk.” To keep it running, the park and the local government have decided to take an alternative route: to open its gates to tourists.

Tourism funds bring in cash but cause stress to wildlife

The park opened to the public in June, and in an age of social media and budget travel, its popularity soared. When poultry farmers found two juvenile Visayan leopard cats in July in the village of Pontevedra, in neighboring Capiz province, they turned them over to Mari-it. The news went viral, bringing tourists flocking to the park to see the spectacularly spotted cats named Ponte and Vedra; today, the park gets an average of 100 visitors per month.

The park rolled out the welcome mat: it mounted animal-shaped sculptures at the entrance, signboards with detailed descriptions of each species, and paved the paths between enclosures. It also posted ethics reminders: “Observe silence,” “Don’t harm the animals,” and “Don’t feed the animals” signs are peppered throughout the park.

Tourists pay an entrance fee of 20 pesos (35 U.S. cents) and an additional 20 pesos as an “environmental fee,” which helps pay for the park’s operating costs. “The park needs funds,” said Jeniffer Osorio from the Lambunao tourism office. “That is why we are promoting Mari-it as an ecotourism site to become a self-sustaining park on its own.”

But it hasn’t all been smooth sailing. By the entrance, motorcycle taxi drivers waiting for fares taunt a Philippine long-tailed macaque (Macaca fascicularis philippensis), a common monkey species; in the area allocated for spotted deer and warty pigs, the cacophony of the tourists disturbs the deer during feeding time and sends them hiding in the bushes. In the hornbill area, tourists often shake the enclosure fence to prod the birds into moving so that they can get it on video.

“There is really need to look at how [tourists] act here,” Myra said. The attendants have received numerous and persistent reports about the tourists’ bad behavior causing stress among the animals. But there aren’t enough staff at the park to police the tourists. And though they bring in much-needed cash, the tourists do more harm than good, Myra says.

Conservation park success stories abound, but their failures are rarely talked about. There’s a fear that Mari-it, in being opened up to the public in an attempt to stay afloat, now faces the prospect of doing lasting harm to the animals in its care.

“The tourists should be given orientations about the do’s and don’ts before they enter the park,” Bull said, adding that they plan to address these concerns. But for Lastimoza, who resigned last year, “the visitors need to be managed so that they will not be threats to the animals in captivity.”

“Converting the park as a tourist site has indeed brought the needed money,” Lastimoza said. “Otherwise, the situation of the animals, even if they are in the park now, remains the same: They are just waiting for their extinction.”

This article by Arnel Murga was first published on Mongabay.com on 16 December 2019.