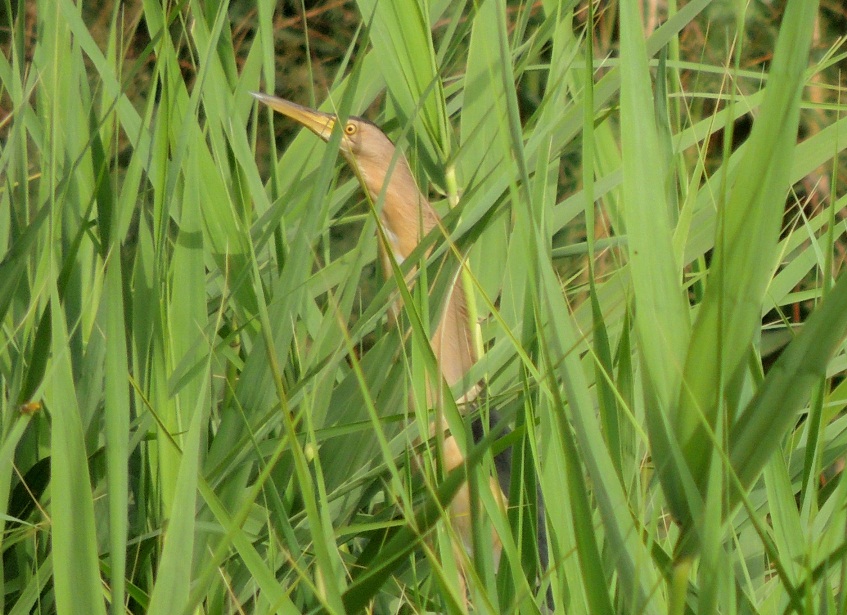 I visiting my friend and long time birding colleague Brian James last weekend. He lives at Thuwal north of Jeddah. On Thursday morning we set out north with fellow birders Dan and Alice towards Yanbu. We birded the Yanbu area and over the weekend we saw over 115 species. This is even more than my trips to the supposedly more species-rich Jizan area.

I added two more species to my Saudi list with some checking needed before I might be able to claim a third. There is more about these later in this blog and in future blogs. On the way to Yanbu and on the way back we stopped off to look at Wadi Rabigh.

This wadi has natural standing water at various points down its route for much of the year. This is a rare phenomenon in most of Saudi Arabia outside the south west.

Last weekend, it seem to have attracted some of the less common members of the heron family. Camels grazing on a reed bed forced out a little bittern. At the same bed, I accidentally flushed a quail which shot up the adjacent hill side. A flock of chestnut bellied sandgrouse flew over head near-by. Further up stream was a flock of 18 little egret.

Downstream and seen on Friday on the way back was a group of 7 squacco heron.

Last time (and the only other time) I visited Wadi Rabigh, we saw a single black stork. The same happened again though we have no way of knowing whether it was the same bird.

Near the wadi we saw fully 2000 black kite at various places particularly on power pylons. Huge numbers of black kite winter down the Saudi Red sea coast, moving up and down different times during the winter and passage seasons. Tabuk in the north has several thousand in autumn which thin out as the winter progresses whereas numbers around Rabigh are higher in mid winter and again at the moment.

We came across a brown necked raven nest where one member of the pair was on the nest while the other one was bravely attacking any black kite than came close.

This must be very hard work at the moment. Surprisingly we only saw one steppe eagle in the wadi. At some times in winter their numbers are far higher.

Warblers are starting to come through.

Chiffchaff have been there all winter but there were also as many migrant willow warbler.

European reed warbler were present in the reeds as was this migrant Marsh warbler displaced by the camel grazing mentioned earlier. Two clamorous reed warbler were also present there. Arabian warbler, lesser whitethroat and common whitethroat were also observed. Other notable birds were two grey wagtail seen at different places in the wadi on the two separate days. Yellow wagtail and white wagtail were both fairly numerous.

African silverbill were seen in a couple of places. And more interestingly a flock of cretzschmar’s bunting was drinking in one of the pools.

The journey north of Rabigh towards Yanbu was eventful. There were many wheatears particularly on the fencing by the road designed to keep camels off the highway.

We spent a long time observing the last bird for distinctive features including it having a larger black mantle (and consequently less white on back) than a pied wheatear. Other features such as less white on the nape and a short primary ptojectiona fitted with Cyprus wheatear. Although Brian has seen them before in the area, this new to me and number 276 on my Saudi list.

Like many birds from the near east and eastern Mediterranean, the big majority of them go south on passage on the west side of the Red sea but crucially a small number take the the eastern side. The same phenomenon was seen last week when I picked up a Ruppells warbler (with pictures) near Tabuk. Often the guide books don’t acknowledge this. Incidentally the black eared wheatear were the first I had seen this spring.

We diverted into the fields near the Cyprus wheatear, 70 kilometres or so north of Rabigh. These were relatively green because of winter rain and dense with different types of lark including greater short toed lark and lesser short toed lark.

There was clear evidence of recent breeding among the resident larks. Several very young hoopoe lark and black crowned sparrow lark were seen.

Almost every time I go out looking for larks, I seem to come across cream coloured courser. This time it was evident they were young ones around too.

The Rabigh area once again proved itself good for birding. Yanbu was just as good.

Dear Robert,
Tomorrow we are planning to go for birdwathing in Jeddah, Can you please tell me some good areas for bird watching, you can send me mail to [email protected]