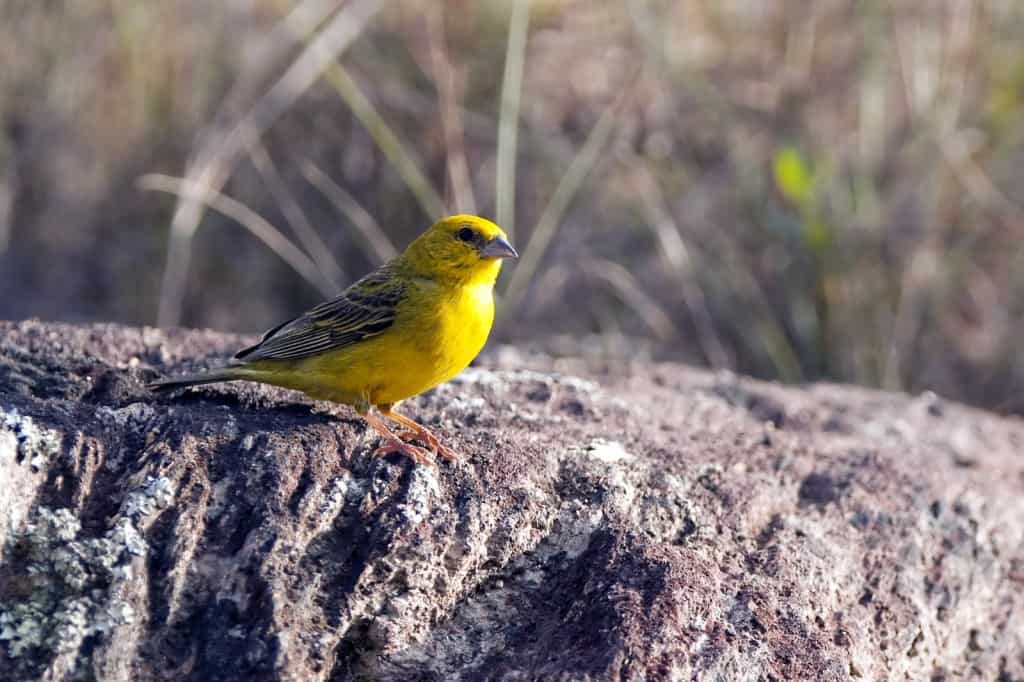 Our second day in the Canastra Mountains region was inside the Serra da Canastra National Park. The first of two days there.

The road is not that good, so we had to contract one guy that would take us there. Ronam would be our driver. A nice guy, patient and very dedicated. Helped us in some situations. He was, for example, who saw the giant anteater.

Ronam came to the hotel at 6:15am, and then we left. On our way, we would try again the speciesRufous-winged Antshrike,Cinereous Warbling-FinchandBlue Finch.

We arrived in the area that usually it is possible to find the Rufous-winged Antshrike,but we didn’t. Then we drove a little more, and tried the Blue Finch. It didn’t show up, but instead, we saw thisStripe-tailed Yellow-Finch.

After some time, the Blue Finch appeared, but far away, and it did not approach. I could not get any photo of him.

We continued going towards the park entrance, and stopped at the point Geiser usually sees theCinereous Warbling-Finch. Some attempts to playback it and no success. We kept waiting a little longer, and then Geiser said he heard the bird, half away from us.

We went into the field and then we heard the bird.It was far way from us. It was a couple and two young birds. Amazing.

I spent some time there, trying to get closer to get a better picture. It was worth it.

A few more minutes later, and close to the road a Rufous-winged Antshrikevocalised. This time it was closer, and I got this photo.

We continued going up, and arrived at the park entrance. We paid the entrance fee, $ 4 per person, and then returned to the road.

Our first stop was to try the Gray-backed Tachuri, Polystictus superciliaris. Few minutes after Geiser played it back, it appeared. And very close. Another lifer. A beautiful lifer. A very small bird, but very cute one!

In the same area, a Collared Crescentchest, Melanopareia torquata, sang close to us. I took some pictures and the bird disappeared. We got into the car to continue moving and the bird sang close to the road again. And then we saw that there were two birds. I had an experience not too good with this bird in Itirapina, SP. Now I could see the bird well enough. Two of them. Very cool.

We drove up a little more, and again Geiser tried the Blue Finch, in a region full of a bush that this species uses for nesting. But again the bird didn’t show up. However, while searching for him, some Tawny-headed Swallowflew close to the road and occasionally landed near us.

We continued driving towards the higher areas of the park.

While searching for the birds, a bus pulled up with tourists. And then, a lot of people landed, too much noise was made, and therefore no bird appeared.

We continued on the road, and a few kilometers later the tire burst. In the same place, a lifer at the side of the road, within the field: Cock-tailed Tyrant, Alectrurus tricolor. I went into the field while Ronam and Geiser were switching the tire.

I was trying to get closer to the bird, and at every step, took a picture. I went closer until theCock-tailed Tyrantlet me get about 6m from it.

In the same region of Cock-tailed Tyrant, Geiser tried again the Sharp-tailed Tyrant. This time it worked. Although the bird has appeared and did not pay attention to the playback, I could make this picture. The bird is small, very small.

Geiser and Ronam fixed the car, and we returned to the road. Our destination was the village of São João Batista, where we would spend the night. At one point in the road, Ronam stopped the car and pointed out to something: a giant anteater, Myrmecophaga tridactyla. The wind favored us, then we enter the field and we got very close to the animal. What a beautiful animal. Second time in my life I see it. Exciting!

Back on the road, and at some point Ronam stopped the car: a small rattlesnake crossing the road. After we photographed the snake, Geiser gently put it inside the field, to avoid it could get hit by a car.

After this, we still tried to find some birds, but with no success. Then we arrived at the place we would spend the night.

What a great day we had.