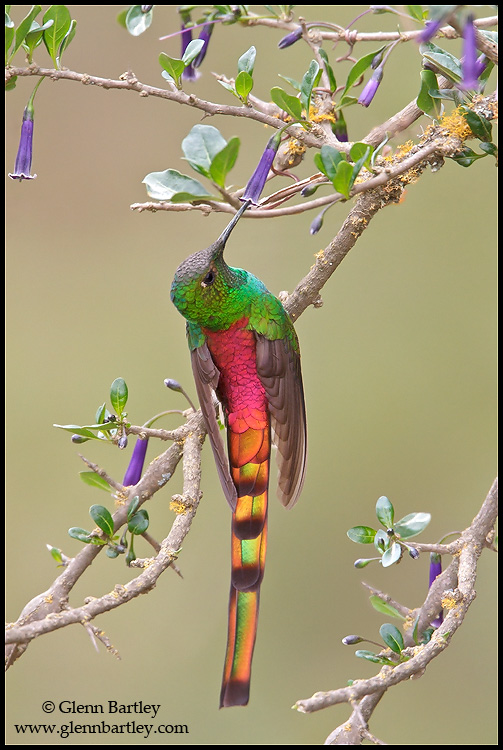 The next move took me further down the old road towards the town of Comarapa. This would be my base for visiting the higher elevation cloud forests of Siberia where I would search for the Rufous-faced Antpitta and Black-hooded Sunbeam. Lower elevations were good for the Bolivian Earthcreeper, Yellow-billed Tit-Tyrant, Olive-crowned Crescentchest and Great Pampa Finch. Although I missed the Sunbeam here we did find a great site for a territorial Red-tailed Comet. What a spectacular hummingbird!!

I spent several days in this area battling the sunny conditions and elusive birds before continuing on to Cochabamba. Along the way roadside stops turned up Fulvous-headed Brush-Finch, Brown-capped Tit-Spinetail, Grey-bellied Flowerpiercer, Brown-capped Redstart and Creamy-breasted Canastero.

For a bit of a rest morning I visited the Laguna Alalay which is right in town. Here I photographed Collared Plovers and spotted Rosy-billed Pochards, Red Shovellers and White-backed Stilts among other common waterbirds.

At one point while walking around the perimeter of the lake a brilliant red, white and blue bird emerged from the reeds. This was a highly unexpected colour palette to encounter here and it definitely took a few moments for the brain to comprehend that the bird I was seeing was actually a Cattle Egret that some local fool had painted with the colours of the resident soccer team. I seriously wish I could have found him and sprayed him with paint!

I was fortunate enough to have a local researcher to take me out to her study site the next morning to look for the Cochabamba Mountain Finch (another endemic). That morning I was lucky to find and get decent images of this species as well as Rock Earthcreeper. I was unlucky to back the car in to a rock. Crap!

That afternoon I visited the nearby San Miguel Polylepis forest and had an awesome encounter with Red-crested Cotingas as well as Puna Canastero, White-winged Diuca Finch and Slender-billed Miner.

Missing the Sunbeam was not sitting well. Not one bit! Reluctantly I made the decision to drive back the 200km and 5 hours or so to the “site” for the Sunbeam and try my luck again. But once again luck was not on my side. In addition to the THREE flat tires that I got on the way, a huge protest had pushed traffic from the new road to the old one and there were so many cars and so much dust that any birds that may have been there had wisely moved on. Consolation prizes along the way included a cooperative Rufous Antpitta and Light-crowned Spinetails. But at the end of two more days I had to face the fact that it was strike two on the sunbeam.