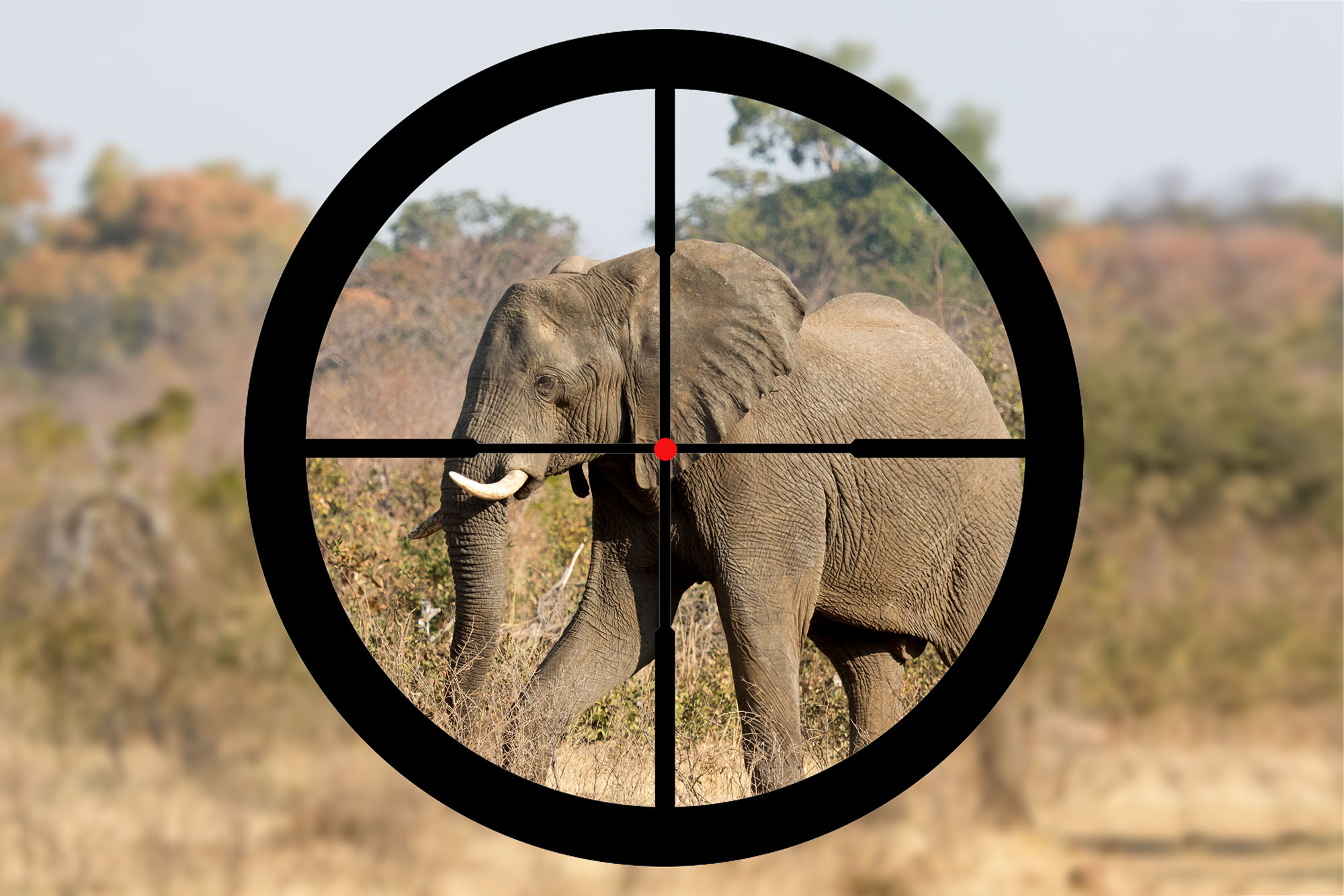 I ran into some Americans having an issue at customs at the airport in Lusaka, Zambia, last summer.

Craig and Amy (last names withheld), from Western Michigan, and two friends were in the country to go hunting and were stuck at customs until the rifles and crossbows they brought from home were cleared.

“We won this trip at a hunting conference,” Amy said. “My husband bid on a hyena — they’re cheap — so we’re here.” The couple with Amy had paid just $3,000 to kill a hippopotamus (“but then there’s the fees, regulations and shipping — so it really adds up!”). The group of four were off for a trek into the remote interior of Zambia.

It wasn’t their first time hunting in Africa. “Our trophy room is full,” Amy laughed. “It’s becoming ridiculous. And then a friend of ours died and so all of his trophies are in our garage. I want Craig to stop but … (hunting) is addictive. We have no room (for the taxidermy).”

While Amy was along for the ride — “I’m a vegetarian from Brooklyn and I won’t hunt what I can’t eat so I’m out” — Craig had “won” the right to kill a hyena, even though the couple wouldn’t take the body.

“We won’t take the hyena back,” Amy said. “Also, it’s not edible for the villagers, so it’s just gonna die.”

While that cackling scavenger is fair game, there is one creature Craig won’t shoot.

“My sons told my husband no elephants — if you shoot an elephant we will never talk to you again,” Amy said. “I don’t know if they would (not talk to him) but there’s something about elephants so … no elephants.”

“Hunting is good for the community!” Craig insisted, as several tourists looked disdainfully at the hunting group.

Groups like Amy and Craig’s have become exceedingly unpopular with other tourists since 2015 when Zimbabwe’s famed Cecil the lion was lured out of a national park to be shot by a dentist from Minnesota. It was later found Cecil suffered “incredible cruelty” during a drawn-out death that took as long as 12 hours.

Craig and Amy were unapologetic about their hobby

“It brings money into local communities, the meat feeds them and it helps overpopulation,” Craig said — echoing an argument the Botswana government used last year when it brought back big game hunting to the country.

Typically, animals like giraffe, zebra, antelope and warthog are eaten by villagers, however, hippo and buffalo will be consumed as well. Large cats and hyena are not usually on the menu.

In May last year, Botswana President Mokgweetsi Masisi, announced the country would lift the hunting moratorium and issue “fewer than 400” licenses for elephant hunts annually to “control herd numbers, reduce human-elephant conflict and create jobs in areas where opportunities are scarce.” The decree came as the World Wildlife Fund, listed the African elephants as vulnerable.

This week, the Safari Club International held its annual hunting convention in Reno, Nevada — including an online auction to hunt with Donald Trump Jr. in Alaska, as well as bids to shoot leopards, elephants and other endangered animals – enraging animal activists.

“This annual event is the largest meeting in the world of people who celebrate the senseless killing, buying and selling of dead animals for bragging rights,” said Kitty Block, president and CEO of the Humane Society of the United States, in a statement. “As our planet suffers an extinction crisis, it is business as usual for the trophy hunting industry and SCI, who continue to revel in spending millions of dollars every year to destroy imperiled wildlife.”

While hunting proponents claim funds are necessary in these countries and it provides employment and food for locals, there is no actual evidence locals see much of the proceeds from, say, a $50,000 elephant hunt — most of the money goes to government fees or safari outfitters.

Eddie, a Zambian and one of my guides at the Robin Pope Walking Safaris camp I stayed at, used to be a driver for a hunting safari and told me he got paid $60 a trip — averaging one trip a month. “They never tipped,” he said.

According to salary explorer, the average salary for Zambians ranges from $68 to $2225 a month (those living outside the capital, Lusaka, make less).

But despite the outrage, every animal is still available to put in the crosshairs — for a price. Zambia and Botswana aren’t the only countries where hunting animals featured on the vulnerable and endangered list are legal. Here are the other African countries where people can fulfill their Teddy Roosevelt and Ernest Hemingway-esque dreams, killing African elephants, endangered forest elephants, lions, cheetahs, leopards, rhinoceros, hippos, buffalos, lions, cheetahs and wild dogs.

“Elephant hunting in Zambia is allowed. Lions and leopards are hunted with bait and can be found in almost all areas. As in Zimbabwe, leopards in Zambia are known for their large size,” according to Hunting Agent Also available are: “Livingstone’s eland, Lichtenstein’s hartebeest, greater kudu, bohor reedbuck, sitatunga, tsessebe, common waterbuck, defassa waterbuck, blue wildebeest, Chobe bushbuck, impala, klipspringer, puku, oribi, Sharpe’s grysbok, warthog, bushpig, common duiker, hippos and crocodiles are abundant in most of the rivers and can also be hunted.”

Despite suffering from severe over poaching, Mozambique has some hunting for four of the big five: lion, leopard, buffalo and elephant, with the rhino off-limits, according to The Big Game Hunting blog. The population of cape buffalo, estimated at over 50,000, are particularly healthy, according to the blog. The African Wildlife Federation claims over half of the country’s wildlife as gone forever.

Trek into the Congo Basin and hunt the rare Bongo and the vulnerable forest elephant with Diana Hunting Tours for a mere $34,000.

On Friday Botswana held an elephant hunting auction — the first since lifting the ban last year.

“Seven packages of 10 elephants each are on offer and the auction will take place in the capital Gaborone on Friday afternoon,” according to the BBC. “The bidders — who must be companies registered in Botswana — are expected to put down a refundable deposit of 200,000 pula ($18,000).”Other animals can be hunted on privately owned game farms.

To help combat elephant-related deaths in a safe, non-hunting way, groups like Natural Selection — which admit there is a problem with wildlife-human encounters — just launched Elephant Express,where minivans that “will be available through the ‘elephant highways’” to transport children in the Okavango Delta area to school and deliver clinic patients safely to their destination.

National parks don’t allow hunting — it is relegated to state, private or communal lands which surround the parks. However, as we saw with Cecil the Lion, once an animal is lured out of a park, it can be fair game. A permit for almost any animal can be obtained in Zimbabwe.

According to African Hunting Safaris, “Namibia, along with South Africa, are the only two countries in Africa where one can hunt the entire big five; lion, leopard, buffalo, elephant and rhino (white as well as black rhinoceros). … Cheetah can be found throughout Namibia and can also be hunted.”

In South Africa, the laws are basically, if you own the land, you own the animals on the land. While canned hunts have been shut down, if an animal is on private land, with the owner’s permission, you can shoot it, including rhino, lion and other endangered species. There are some rules, however, and you can’t shoot a tranquilized animal or if it has been caught in a leg trap.

According to Africa Hunting, these West African countries are “home to a dense animal population including many rare and highly regarded species such as the western roan antelope.” West African savannah buffalo are also a plentiful attraction for hunters, and lion hunting in Benin is popular.

This article was first published by The New York Post on 8 February 2020. Lead Image: Shutterstock.