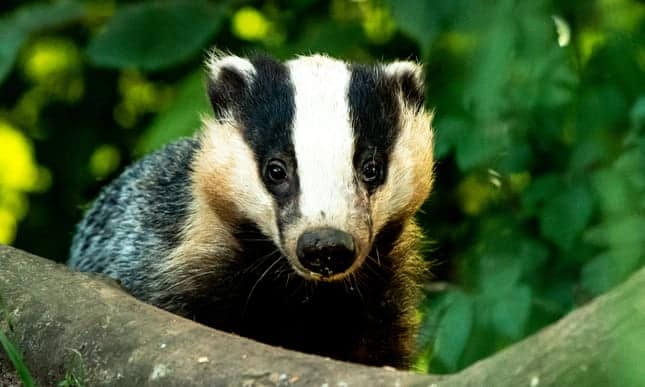 The controversial badger cull in England has been hugely expanded into 10 new areas, with up to 42,000 animals now due to be shot in an attempt to curb tuberculosis in cattle, up from 32,500 last year.

The farming minister George Eustice claimed the cull is starting to show results in Gloucestershire and Somerset, with drops in tuberculosis incidence, but did not highlight a rise seen in Dorset.

Scientists say a lack of statistical analysis in government documents means there remains no concrete evidence that the cull is working. The Badger Trust condemned the expanded cull as “largest destruction of a protected species in living memory”.

The 10 new cull zones are in Cornwall Devon, Somerset, Gloucestershire and Staffordshire, and represent a near 70% rise in the area affected. A separate new zone has also been approved in Cumbria, which is in the low-risk part of England for the disease. Cull zones now cover vast swathes of many counties: 68% of Devon, 63% of Dorset and 54% of Cornwall. 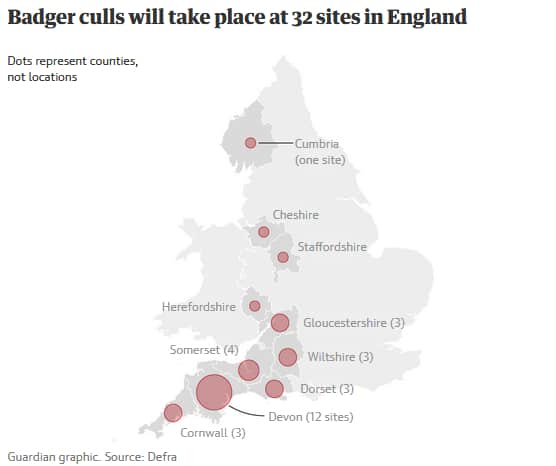 Ministers and many farmers argue the badger cull is a vital part of curbing bovine tuberculosis (bTB), which led to 33,000 cattle being slaughtered in England in 2017 at a cost of £100m. The government is offering £700,000 over four years to help groups vaccinate badgers, although it spent £6.6m on culling in 2017 alone and the total culling cost to date is estimated at about £40m.

Scientists say culling could actually spread the disease even further by disrupting badger populations. They say a more rigorous testing regime and further restrictions on the movement of at-risk cattle, along with badger vaccination, are the key to ending the epidemic.

“Bovine TB remains one of the greatest animal health threats to the UK,” said Eustice. “There is no single measure that will provide an easy answer, which is why we are committed to pursuing a wide range of interventions to protect the future of our dairy and beef industries and eradicate the disease within 20 years. No one wants to be culling badgers forever, so the progress reported today is encouraging.”

Prof Rosie Woodroffe of the Zoological Society of London, who conducted a landmark 10-year trial on badger culling, said: “It does look like it is going down in Gloucestershire and Somerset, but ‘looks like’ is not good enough. The big drop in Gloucestershire happened only in year four of culling and might be a blip.

“They have done no statistical analysis at all. So there is not yet evidence to be confident that the policy is working.” A review of the government’s TB policy is due within three weeks. Woodroffe said: “It makes you wonder why they are reviewing the policy if they are just pushing ahead anyway.”

Dominic Dyer, CEO of the Badger Trust, said ministers “have today given the green light to the largest destruction of badgers in living memory. More badgers could be killed in the next few months then the last five years combined.”

He said the cost to taxpayers was £1,000 per badger culled and that vaccination would be far less expensive: “A national badger vaccination programmes combined with improved TB testing for cattle, tighter biosecurity and cattle movement controls, will be far more effective. This is a far better outcome for farmers, taxpayers and for the future survival of badgers.”

Ellie Brodie of the Wildlife Trusts said: “It is unacceptable that the government has not waited for the results of their own review before forging ahead. The badger cull is a dangerous distraction from addressing the main route of bTB transmission in cattle, which is between cattle. We’re calling on the government to invest in medicine, not marksmen.”

In contrast, Stuart Roberts, vice-president of the National Farmers’ Union, welcomed the drop in incidence in Gloucestershire and Somerset and the expansion of the cull, saying: “We must have every option available to us to tackle bTB – including cattle testing, cattle movement restrictions, biosecurity advice, vaccination and control of the disease in wildlife.

“More than 33,000 cattle were slaughtered last year in England because of this devastating disease and more than 3,800 farms that had previously been clear of the disease were affected by it.”

This article was first published by The Guardian on 13 Sep 2018.