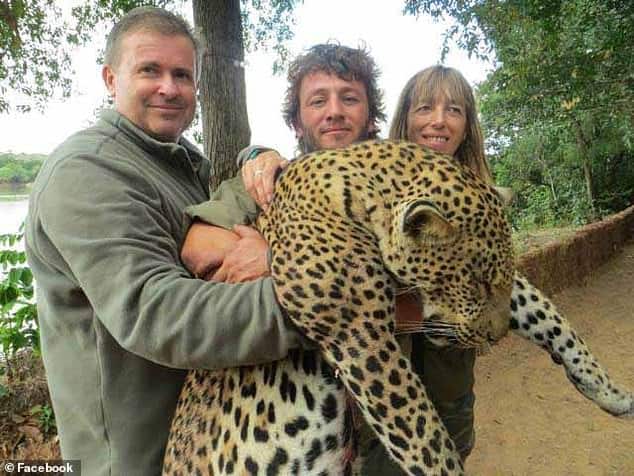 A French couple have been forced to sell their supermarket franchise after pictures of them hunting big game in Africa surfaced online, causing outrage.

Jacques Alboud and wife Martine, who owned a Super U franchise inL’Arbresle, near Lyons, were pictured in Tanzania years ago standing above the corpses of lions, leopards, buffalo and hippos they had shot.

The images appear to have been available on social networks since they were taken, but only began circulating in France this week, prompting people to call for a boycott of their store and send them death threats.

Even the Super U parent company spoke out against their activities, saying the behaviour was ‘in total opposition with the values defended by us.

‘We condemn them even if they are private activities,’ a spokesman added.

The Super U group has officially committed to work towards ‘a better respect for aquatic and terrestrial resources’ around the world.

On Tuesday, Super U announced that Jacques and Martine would leave the business with ‘immediate effect.’

‘Totally opposed to private hunting safari activities by associates, Super U announces that they will leave with immediate effect.

‘Measures to support their employees and take over their stores are put in place,’ a spokesman added.

Contacted by French media, the couple have decline to comment.

However, a testimonial by Martine Aboud posted on the Safari organiser’s website says: ‘Thanks to Pierré van Tonder for his welcome and the perfect flawless organisation of our safari in the wild bush of the Selous.

‘Thanks to Clinton for his passion and his patience which allowed me to have such a successful, beautiful and fun safari, with top leopard and top crocodile!

‘We will be back with Pierré and Clinton van Tonder!’

Pierre van Tonder Big Game Safaris offers a variety of hunting packages starting at $17,000 per person and going up to $43,000.

It is not known which hunting package the Albouds bought, but they are pictured posing with corpses of all the animals listed above.

Big game hunting in Africa is a highly controversial topic, with animal activists arguing that the sport is cruel and devastating to wildlife.

However, pro-hunting groups say their work – and particularly the money it draws in – provides a vital contribution to conserving threatened African species.

This article was first published by The Mail Online on 11 July 2019.

Why don’t you take on these beautiful animals on equal terms,no weapons.Don’t take your cowardly attitude and shoot them with a high powered telescopic rifle,where the animal has no change at all.You are freaking cowards,you and your guide disgust me.As for David Gaines you rotting scumbag,you are the clueless idiot,I live in Africa,and know these “CUTE” hunting is not legal it is murder, all so no I will not leave these hunters alone.Leave them in peace you have no right to be in their domain you dumb shmuck stay on your side of the fence,you climb over to theirs expect… Read more »

These are not hunters, they’re cowardly scumbags.

Listen up all you mushy brain dead idiots. You clueless idiots need to have at least a little bit of knowledge of the perfectly legal hunting you are commenting on before you get on here and prove just how stupid all of you sound. You all need to go out in the wild unarmed around these “innocent” animals and find out just how cute they really are when they are soon feeding off your clueless braindead corpse. Leave these hunters alone and mind your business. I dont hide behind a computer like you idiots but would gladly continue this discussion… Read more »

They are not meant to be ‘cute’, they are wild animals and of course they might attack us. Their instinct may be to hunt us but as humans our first instinct should be to have intelligence enough to know that as the dominant species (at least when we carry a gun lol) we need to protect them and conserve them. comparing a human to a wild predator is ridiculous. ‘Oooh. that nasty leopard might bite me so I gotta shoot it’ What a whiner. You would condone hunting tigers to extinction, would you? You sound very aggressive -but then people… Read more »

People like you deserve a bullet in your worthless head.

No one could sound more abysmally stupid than you if they tried. These animals are native wildlife of Africa and are being sold out by their corrupt governments and decimated by privileged white trophy hunters, many to the point of extinction. The fact that you have no concept of what is truly happening to these species is betrayed by your completely moronic post. Oh, and by the way, only an idiot like you thinks you’re not hiding behind your computer when that’s exactly what ARE doing. And only the heir to the throne of the KINGDOM of idiots says anything… Read more »

I would be more than happy to discuss this in person with you, I don’t hide behind computers they are just a tool for communication among intelligent people but just to put you straight, if you need a gun to go somewhere, then don’t go.every animal you kill for fun is one less for our siblings to see, what a sad state of affairs never having seen a magnificent beast in its own environment

Harvisting of wild life needs to take to maintain balance in the eco system as well as support the native people of that area with employment! l wouldn’t ever be interested in participating myself but this shaming BS needs to stop ! These people have alot to say, but.know answers, if the really want to contribute get out in the bush and confront the poachers and becare full they might confront back and test your big mouth resolve!! You back biters step out and do something manly!!

You are truly an idiot if you actually think that is the case. Hunting these animals today is merely driving them extinct – or takes place in a canned hunt arena. And it most certainly does not support the native people – which you would know if you ever read any of the field reports of how the only people benefiting from today’s hunting are the guides who betray these animals and the government that sells them out.

Another idiot and it’s a male, what a surprise LOL.

Open hunting season on all hunters. Let the games begin.

Hunting should be for a purpose. Now a days we can get everything without hunting for pleasure.

I agree good serve them right!

This is sport??? A zebra? Etc.??? U are all sadistic, narcissistic psychopaths- under the guise of conservatism and helping the economy of these villages. Total utter bullshit. Murdering these animals as they eat or sleep? What a challenge. Just so u have bragging rights on social media and have an innocent animals head on your wall and animal throw rugs-or u stuff them and keep them in your house as ornaments. Get help… or better yet, shoot each other… totally no loss. And no one would want your head on their wall

Good glad to see their lives were effected in a negative way, take a life have a shit life.

That’s karma no sympathy from me

We need to be more stringent on Europeans travel to Africa for wilde hunting! Fucking bastards!

Those African countries need to stop allowing people in to destroy their wildlife. But remember, it’s not only European trophy hunters who are doing this killing – plenty of rich American trophy hunters go too.

We’ll Catch up with you ALL. Dam murdering Freaks.

They need to lose everything.

stage 4 to all these fat mofos.

This makes me so angry.

Disgusting, sick people who have no concern for wildlife. Make these people work for preservation of wildlife, either that or jail them.

I don’t understand these people. Instead of being thrilled by life, captivated by life, they are captivated by death. I’m very grateful to the French people for boycotting, making the parent company realize this behaviour will not be tolerated.

And what a total disconnect – posting about these savage killings and expecting that people would approve, instead of the condemnation that they actually got. Idiots.

If you want to hunt build a time machine and go back to the Stone Age, heartless losers

At least they got a punishment!!!

They are not hunters. They are poachers.

Makes me Grit my Teeth and growl….

These people are selfish, what do they think they’ve ACHIEVED by shooting an animal whose only defense is paw to paw combat(?). I hope they suffer as much if not more than what our ecology is distinctly suffering from currently all due to SELFISH individuals like this, a Trophy seeking [look at me type] spree!?!?