IT IS LOW TIDE at the end of the wet season in Broome, Western Australia. Shorebirds feeding voraciously on worms and clams suddenly get restless.

Chattering loudly they take flight, circling up over Roebuck Bay then heading off for their northern breeding grounds more than 10,000 km away. I marvel at the epic journey ahead, and wonder how these birds will fare.

In my former role as an assistant warden at the Broome Bird Observatory, I had the privilege of watching shorebirds, such as the bar-tailed godwit, set off on their annual migration.

I’m now a conservation researcher at the University of Queensland, focusing on birds. Populations of migratory shorebirds are in sharp decline, and some are threatened with extinction.

We know the destruction of coastal habitats for infrastructure development has taken a big toll on these amazing birds. But a study I conducted with a large international team, which has just been published, suggests hunting is also a likely key threat.

Worldwide, there are 139 migratory shorebird species. About 75 species breed at high latitudes across Asia, Europe, and North America then migrate south in a yearly cycle.

Some 61 migratory shorebird species occur in the Asia-Pacific, within the so-called East Asian-Australasian Flyway. This corridor includes 22 countries – from breeding grounds as far north as Alaska and Siberia to non-breeding grounds as far south as Tasmania and New Zealand. In between are counties in Asia’s east and southeast, such as South Korea and Vietnam.

What are migrating birds?

The bar-tailed godwits I used to observe at Roebuck Bay breed in Russia’s Arctic circle. They’re among about 36 migratory shorebird species to visit Australia each year,amounting to more than two million birds.

They primarily arrive towards the end of the year in all states and territories – visiting coastal areas such as Moreton Bay in Queensland, Eighty Mile Beach in Western Australia, and Corner Inlet in Victoria.

Numbers of migratory shorebirds have been falling for many species in the flyway. The trends have been detected since the 1970s using citizen science data sets.

Five of the 61 migratory shorebird species in this flyway are globally threatened. Two travel to Australia: the great knot and far eastern curlew.

Threats to these birds are many. They include the loss of their critical habitats along their migration path,off-leash dogs disturbing them on Australian beaches, and climate change likely contracting their breeding grounds. 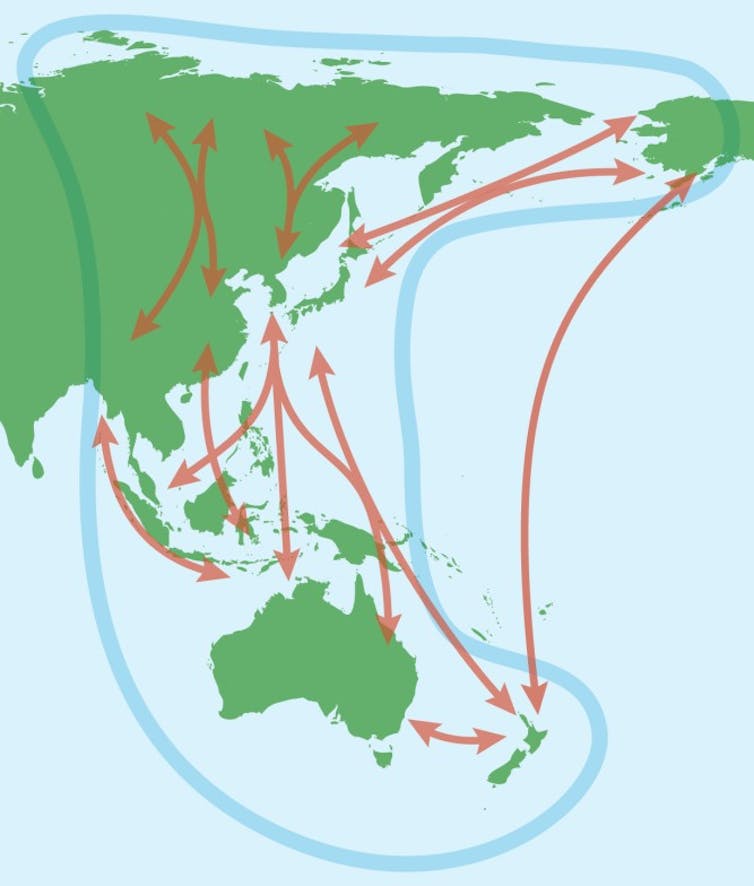 And what about hunting?

During their migration, shorebirds stop to rest and feed along a network of wetlands and mudflats. They appear predictably and in large numbers at certain sites, making them relatively easy targets for hunters.

Estimating the extent to which birds are hunted over large areas was like completing a giant jigsaw puzzle. We spent many months scouring the literature, obtaining data and reports from colleagues then carefully assembling the pieces.

We discovered that since the 1970s, three-quarters of all migratory shorebird species in the flyway have been hunted at some point. This includes almost all those visiting Australia and four of the five globally threatened species.

Some records relate to historical hunting that has since been banned. For example the Latham’s snipe, a shorebird that breeds in Japan, was legally hunted in Australia until the 1980s. All migratory shorebirds are now legally protected from hunting in Australia.

We found evidence that hunting of migratory shorebirds has occurred in 14 countries, including New Zealand and Japan, with most recent records concentrated in southeast Asia, such as Indonesia, and the northern breeding grounds, such as the US.

For a further eight, such as Mongolia and South Korea, we could not determine whether hunting has ever occurred.

Our research suggests hunting has likely exceeded sustainable limits in some instances. Hunting has also been pervasive – spanning vast areas over many years and involving many species.

The motivations of hunters vary across the flyway, according to needs, norms, and cultural traditions. For instance, Native Americans in Alaska hunt shorebirds as a food source after winter, and low-income people in Southeast Asia hunt and sell them.

National governments, supported by NGOs and researchers, must find the right balance between conservation and other needs, such as food security.

Efforts to address hunting are already underway. This includes mechanisms such as the United Nations Convention on Migratory Species and the East Asian-Australasian Flyway Partnership. Other efforts involve helping hunters find alternative livelihoods.

Our understanding of hunting as a potential threat is hindered by a lack of coordinated monitoring across the Asia-Pacific.

Additional surveys by BirdLife International, as well as university researchers, is underway in southeast Asia, China, and Russia. Improving hunting assessments, and coordination between them, is essential. Without it, we are acting in the dark.

This article was first published by Australian Geographic on 26 May 2020. Lead Image Source: The great knot – Image credit: rock ptarmigan/shutterstock