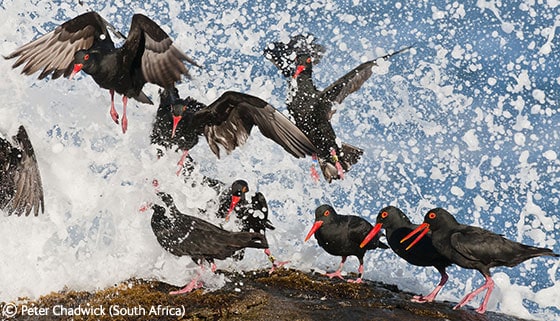 Peter Chadwick is an award-winning photographer. His image “Taking Off” won the Gerald Durrell Award for Endangered Wildlife in 2011

Your photograph, “Taking off”, won the Gerald Durrell Award for Endangered Wildlife last year. What did it mean to you to win in this category?

My picture of the African Black Oystercatchers taking off from the rock as a wave crashes over them really showcases the harsh yet fragile environment that these birds live in, also highlighting their need for complex social interactions. In the early 1980s their numbers plummeted to around 4500 birds and through conservation efforts the population now stands at around 6000 birds. This makes them a good ambassador for the coastal environment, showing that we can make a positive difference if we choose to. Thus the Gerald Durrell Award for Endangered Wildlife was particularly fitting as it certainly helps me showcase these endangered birds and the marine environment in which they live. As a boy my excitement about the outdoors was certainly enhanced through reading all of Gerald Durrell’s books and it is indeed a great privilege to receive the award in his name.

Could you reveal a bit about the photo and the process of getting the shot?

This particular image was taken on Malgas Island, that is found within the West Coast National Park of South Africa. The island is critical to protecting breeding populations of Cape Gannets, African Penguins, Cape, Bank and Crowned Cormorants and of course the African Black Oystercatcher. The island in fact holds the highest breeding density of African Black Oystercatchers anywhere and breeding space is harshly contested for.

The island can only be reached by boat and weather is often a limiting factor to getting onto and off the island and any trips needs to be planned well in advance. As this is a protected area, special permits are also required. All food and water has to be taken with you and all rubbish obviously has to be removed. Planning for the trip is quite considerable and time consuming but it is an incredible privilege to sit on a small island with thousands of breeding birds.

To obtain this particular image, I had been photographing the birds over three mornings at the same location and saw that they regularly met in the early mornings to strengthen pair bonds, proclaim territories and on occasion squabble with one another. The particular rock where these birds were photographed was the popular meeting point for up to sixteen birds and so I concentrated on this point, waiting several hours for the specific action to happen. In this particular series I took about seven or eight images but over the three days probably took about 75 – 100 images. Patience brings the reward!

And your tips for aspiring wildlife photographers?

I would say the most important aspect is to respect your subject – capture the image without disturbing your subject or manipulating the situation. Have patience and get to know your subject before going anywhere near a camera. Experiment and look at the work of other photographers but do not try to copy them – create your own style that makes you unique. I would say that only 20% of the image is created through technical knowledge of your equipment and 80% through your own creativity.

Wildlife Photographer of the Year winning inspirations, part two : Peter Chadwick on “Taking Off” was written by Katherine and published in the Hoopoe, a Blog by NHBS.