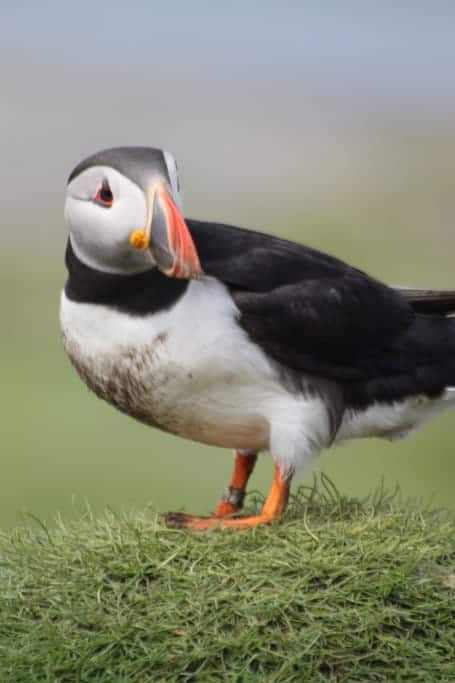 I have just returned from a week-long trip to the Isle of Mull, an Inner Hebridean Island off the West coast of Scotland. It has to be said, that after only one week I have utterly fallen in love with the Island and hope to return as soon as possible. The trip was organised by Cain Scrimgeour, a Wildlife Photographer and recent graduate.

Ten of us embarked on our journey on June 30th and we were a combination of Wildlife & Media or Conservation Students. After quite a drive we arrived on the Isle early evening. As we drove along to Tobermory with the intention of grabbing some well deserved fish and chips we got our first Seal sighting. My first EVER Seal sighting; I was overjoyed! We pulled up onto the verge and clambered out to see a couple of Grey Seals (Halichoerus grypus) frolicking just off the rocky shore. A good start but unfortunately the weather was pretty poor and we were facing erecting all of our tents in torrential rain.

We arrived at the Killechrohnan Estate campsite and yes, it was still raining. Despite this we managed and were soon wandering down the lane to see if we could see the nearby White Tailed Eagle (Haliaeetus albicilla) nest. This would be another ‘lifer’ for me and with my love for Raptors I was eager. Through the bleak weather Cain thought he could make out the Eagle and promptly went to seek his scope. We all got a good glimpse of what appeared to be the larger female and the nest.

The next morning I was woken up by the raucous noise of the nesting Common Gulls (Larus canus) and Ravens (Corvus corax) – what an alarm clock! With our campsite situated on the shore of Loch Na Keal we were woken almost every morning in the same way. It was brilliant to see and hear a number of Ravens considering the lack of this species on the mainland. Today was a scheduled boat trip to visit some smaller Islands (part of the Treshnish Isles); Staffa and Lunga. The latter being well-known for its breeding Puffins (Fratercula arctica).

On route to the coast we stopped countless times for wildlife – the most memorable being the Otter (Lutra lutra). Three were seen swimming and feeding together on the coastal shore. This was astounding – broad daylight and three Otters! It just shows how some species can thrive when the environment allows.

We had amazing sunshine and some great views. The Puffin is a well-known and loved species of the Auk family. Unfortunately it is classfied as an Amber list species by the RSPB, with some worries emerging about the Puffins favourite food – Sandeels. It was great to have the chance to see them on close quarters and take note of the food being brought in – this colony appeared to be doing very well. Razorbills (Alca torda) were also seen roving among the Puffins, along with Fulmars (Fulmarus glacialis) nesting on a nearby cliff.

I wandered up the hill away from the main Puffin spot. Along the way multiple Wheatear (Oenanthe oenanthe) were seen. This section of the Island provided great cliff sides for nesting Fulmars. Fulmars also feed on Sandeels and similar to the Puffin concerns are rising about this species and some other sea birds. One of the theories revolves around climate change- this is thought to be causing the primary food to move up our coastline and may eventually mean we lose some of our important sea bird colonies. The RSPB have an ongoing Marine Campaign aiming to protect these areas of coastal and marine habitat; https://www.rspb.org.uk/applications/inforequest/index.aspx?dt=SUNITH0021

Lunga is also famous for Black Rabbits. Unfortunately I didn’t see one of these odd balls but we did have an encounter with a Rabbit – apparently undeterred by a boat load of visitors. This individual continued on with his business of lunch only feet away from passers-by.

More of Mull to come over the next few days – no way can I cram it all into one post!