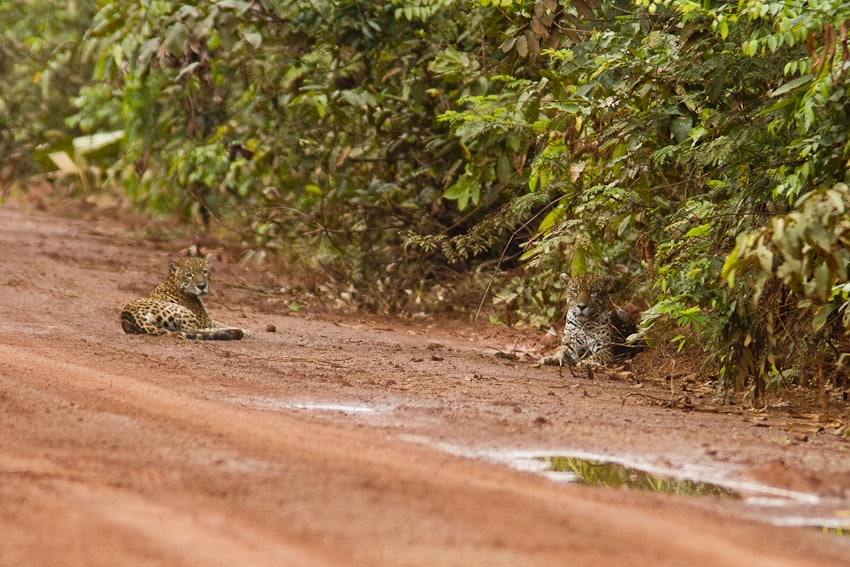 One of the highlights of our trip to Guyana was two sightings of Jaguars on the road between Iwokrama and ATTA. A young male appeared at the roadside 40 meters from us on his way through the area. Our guide Smith was able to keep it at bay on the road for five minutes by making growling noises. Two days later, our driver saw a pair of jaguars walking towards us until they reached a point 120 meters from the Toyota. We watched them for 20 minutes as the female tested the fear of the male in refusing to follow him into the forest. Instead, she laid down on the road. The male tried to lead her off the road on several occasions as they approached.

The hormones must have been high, as it is not normal for a generally shy predator to ignore us for so long. While this scene unfolded in front of our vehicle, I started to wonder why another car or truck did not come along. Only in Guyana is this possible on a main highway traversing the country from north to the south. On a typical day only twenty trucks or minibuses drive this gravel road! That is Guyana in a nutshell as long it lasts.

January is a good time to see Jaguar in Guyana as they mate and apparently are less shy at that time. However, it is far from guaranteed to see this cat. Most people who visited the lodges at the same time as us missed out.

I like traveling and do casual photography in between dedicated birding, visit my hompage if you want to know more

I like traveling and do casual photography in between dedicated birding, visit my hompage if you want to know more