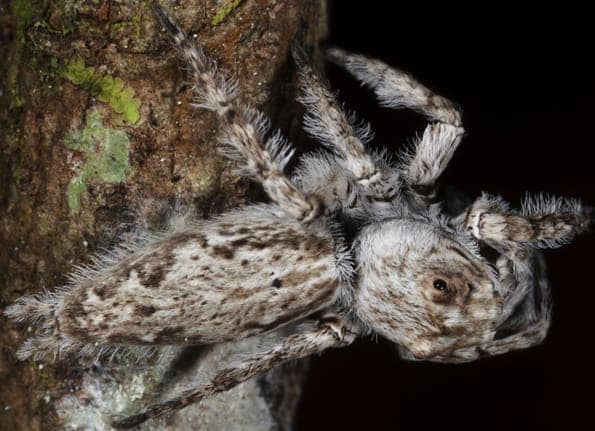 Over the past couple of weeks I have been seeing a curious-looking spider hanging horizontally and upside-down, paralleling a branch and suspended along a single line of silk. This posture was exclusively nocturnal and suggested the spider was hoping to attract insects that rest upon silken threads.

With legs flexed , the overfall appearance (under torchlight) was like a piece of exfoliated lichen.

This spider was new to me and accordingly I wanted to photograph it, but during diurnal conditions the animal was not so easily found. Grasping an appropriately sized twig, the animal assumed the perfect mimicry of a piece of lichen.

Undeterred, I searched and ultimately located the animal and then went about photographing it. Using a high magnification macro lens meant the only variable for focussing was the distance between the subject and the focal point of the lens, so a rail became necessary.

There I was, camera set up, rail located to the correct focal distance and the spider … moving … as if it was not challenging enough … this spider was reluctant to be photographed!

Saved by the arrival of my 11-year-old naturalist-cum-documentary-maker-extraordinaire son, I had an ally.

“Left, right. up, down, in, out!” eventually I got a few shots away and ultimately the one above. I also got this shot (below)revealingthe size of the medial eyes.