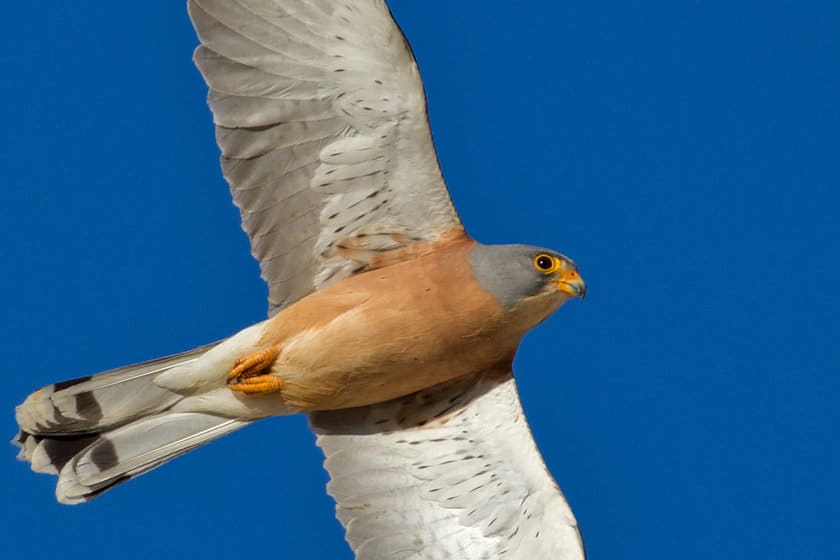 The Lesser Kestrel (Falco naumanni) is closely related to the Common Kestrel (Falco tinnunculus). Their European distribution extends from the Iberian peninsula in the west, through most Mediterranean countries (including some North African countries) and into the Middle East. Their global distribution is greater the further east one travels, extending to northern Mongolia and on into north-eastern China. There are no known cases of the two species interbreeding although there were some suggestions that migrant birds may have bred a second time in winter. Whether they kept within thier own sub-species groups is a matter of conjecture. Detailed studies would need to be done to prove or disprove these two aspects of the bird’s migratory behaviour.

More information is emerging from studies and global reports on their migration. Recent reports show mass concentrations of eastern birds roosting in winter in Madagascar, whereas western European birds winter south of the Sahara although a good number of Lesser Kestrels from Spain and Portugal remain in Andalucia or Northern Morocco. Large concentrations of migrating birds wintering in South Africa and birds caught and ringed in that area, have been shown to originate from Asia Minor. Interestingly, on migration the birds flock together often in larger groups, migrating at a height of around 2,000m.

As more migration studies are undertaken each year, in varying forms and the sharing of information and collation of reports, dates and numbers becomes available, particularly through the internet, the general picture is a mixed one. Most agree that although the Iberian poulations appear to be stable, this sin’t the case in other countries, particularly in Eastern Europe and the Middle East. We have to look more deeply at pesticide contamination affecting reproduction success and food availability, problems with breeding colonies, winter ecology and how to develop and coordinate an international conservation strategy.

The use of radio tracking devices, which are cheapr than satellite transmitters will show quite accurate movements during migration. Tracking or geo-locators are fitted to birds at their breeding sites but have to be recovered the following year then the information on the ‘stick’ downloaded and analysed. The methodology over a longer period should start to show patterns of migration routes, time at various sites and return timings with relationship to weather pattern which affect all avian migrants and their breeding timing.

Lesser Kestrels are a sociable species favouring buildings in need of repair and are not put off by close human contact. They find cracks in walls, Under pan-tiled rooftops, eaves and anywhere in fact where there is enough space to raise a brood. In some countries where recent renovations of older buildings took place, this led to the loss of available nest sites and was particularly so in a lot of the ‘White Villages’ or ‘Pueblos Blancos’ in Spain. Numerous breeding initiatives have taken place across the south- west of the Iberian peninsula where nest boxes have been installed by conservation groups and local authorities in both Portugal and Spain, leading to a stable population at least in this part of the world.

Males (like this one above) and females share incubation which is around one month. Clutch size varies but it’s usually between 3-6 eggs.

Chicks are fed a high protein diet of grasshoppers, crickets, beetles, smaller rodents, lizards and Geckos. Such dependency on this specific food supply has seriously affected breeding populations when agricultural spraying is intense and the modern practice of regularly de-worming cattle, horses, donkeys and other animals here in Andalucia at any rate is killing all the beetles and other ground insects that feed on manure. This irresponsible practice of using chemical drugs with no consideration given to natural plant remedies to rid cattle and other mammals of internal infestations is extremely irresponsible and something must be done to stop this uncaring, blatant poisoning of the food chain. Lesser Kestrels actually are a benefit to Man in the agricultural arena and help by killing small rodents and insects that destroy crops.

This small falcon has a length of 30-36 cm with long pointed wings. The long tail has a broad black terminal band. This falcon has strong sexual dimorphism in its plumage. Males (above) have a chestnut back and a blue-grey crown, neck, rump, and tail. Their belly is a creamy pink with small brown streaks. The eye ring is bright yellow while the feet are an orange-yellow. The undersides of the wings are white with a black tip. Females (scroll down for more flight photos) have a brown back and head with a pale belly. Both the back and belly are streaked with brown. The wings are also light with dark barring and black tips. Juvenile lesser kestrels look similar to the females.

Estimations of the abundance of the lesser kestrel show that breeding numbers have dropped by 95% since the 1950’s. Sharp declines are especially obvious in its European range. A marked decrease in breeding range appeared all over Europe, most notably in Poland, Czechoslovakia, and Austria where lesser kestrels are no longer breeding.

Hunting, usually for small mammals, makes excellent use of the lesser kestrel’s powerful eyesight, sharp claws and strong beak. It dives almost silently from a perch or from mid air and pounces on prey with the claws, before swiftly killing its prey with a bite to the back of the head. Here we see a male carrying back a small lizard to the nest.