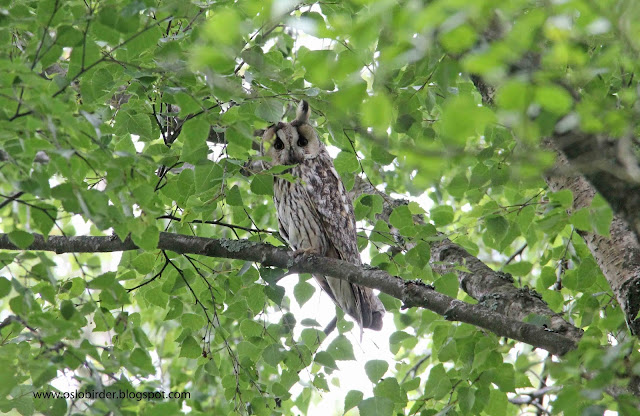 After the rain on Wednesday, yesterday was hot and sunny but today was back to overcast with a hint of rain in the air. I decided therefore to give Årnestangen another try. There were some waders to see and interestingly I believe I had both spring and autumn migrants of the same species! A Spotted Redshank in full summer plumage would most likely have been a female on return migration as in this species the female leaves the male to bring up the young.

3 Common Redshank were probably also autumn migrants as were 4 Greenshank whereas 3 Ringed Plovers were I believe late spring migrants. The interesting species was Ruff with a fine male in breeding plumage being I’m sure a bird that is finished with his lekking and is on return migration whereas a female would I believe be a late spring migrant as even if she had had a failed breeding attempt I would have thought she would try to breed again rather than head south so early.

I never saw them together which is a shame as maybe the male would have tried his luck and put on a display. Little Ringed Plovers, Curlew, Oystercatcher, Common Sandpiper, Lapwing and Snipe were all local birds and gave me 11 species of waders – not bad for an inland site in Mid-June.

Duck numbers had increased since Wednesday with now 90 Teal and 13 Wigeon and the Corncrake was singing again although did not show.

The undoubted highlight, although it cost me dear in terms of mozzie bites, was seeing the Long-eared Owls. I head the squeaky door again but realised it was not coming from the crows nest I had seen on Wednesday.

Looking around I saw another old nest in a tree 10 metres away and then saw a baby Long-eared Owl hanging upside down from a thin branch just under the nest before controlled tumbling down to a thicker branch where it composed itself and perched the right way up.

I also found another youngster perched only about 4 metres above the ground (it may well have fallen to the ground and then climbed back up) and eventually I found an adult paying close attention to everything that was going on from high up in a birch tree. Magical stuff!!

I had a stop in Maridalen to check out whether any ducks or waders were on the mud. 12 male Teal were loafing about and have begun their moult so may well stay here to complete the moult. On the Lapwing front there was an interesting development. There were now six youngsters on the mud at Kirkeby.

Four were quite large and I believe were the same brood that I saw three of on Monday and there were also two very small youngsters. The four larger youngsters had two adults looking out for them whilst the two very small birds seemed to be fending for themselves although there was another adult perched a few hundred metres away.

At Skjerven there are no Lapwings to see on the fields although the grass is long but I suspect that they have been taken down to the waters edge which I don’t have an overview of. In total I know therefore of at least 4 pairs that have bred in Maridalen with three definitely having hatched young and probably a fifth pair (the farmer mentioned three nests at Skjerven to Per Christian although I had only seen two).

So the population in the valley is holding up even though fewer fields are used.

Beutiful, thanks for sharing