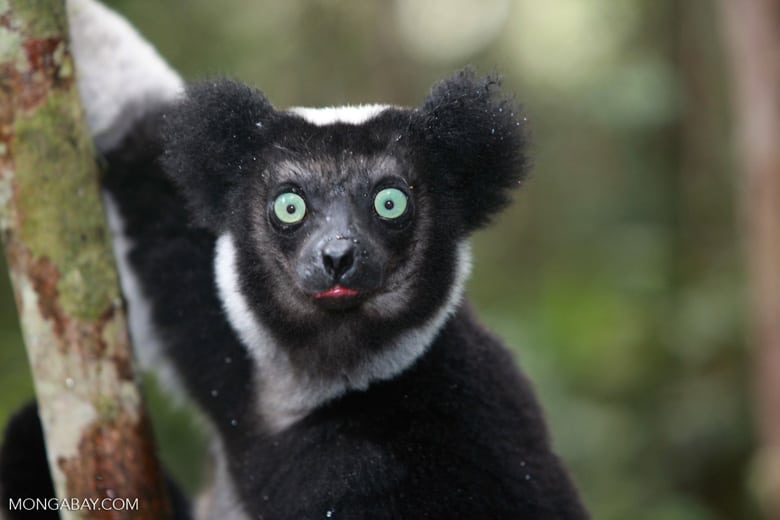 ANTANANARIVO, Madagascar — Two weeks ago, the bodies of 11 critically endangered lemurs were discovered in Iaroka forest inside the Zahamena Ankeniheny Corridor protected area in eastern Madagascar.

The lemurs were allegedly killed by one of the local officials charged with protecting them, to the dismay of conservation leaders.

On Feb. 27, police from the nearby town of Andasibe arrested Jean Yves Ratovoson, the VOI’s vice president, in Andasibe’s rural commune of Antavolobe. On Monday, police undertook a special assignment to arrest his suspected accomplices.

“This criminal act was committed by a leader of the VOI and his two accomplices,” Toto Jean Etienne, president of VOI Firaisankina, told Mongabay. “He was apprehended. They killed 10 babakoto, or the famous Indri indri, and one simpona, or Propithecus diadema.”

Babakoto, also called the indri, and simpona, also called diademed sifaka, are both listed as critically endangered by the IUCN. Scientists believe their populations are declining as a result of hunting and habitat destruction. The roughly 113 species of lemurs live only on Madagascar and the nearby Comoros Islands. They are something of a national mascot and a major tourist draw for Madagascar, but most species are endangered, and the exceptionally biodiverse and impoverished country is facing a conservation crisis. The Madagascar government reacted to the poaching incident at the highest level.

Prime Minister Olivier Mahafaly Solonandrasana told Mongabay that he was personally affected by the case and was committed to seeing it brought to justice, as well as to fighting wildlife poaching in general. He made the remarks during an interview at a celebration of World Wildlife Day at the American Center in the capital Antananarivo on March 8, where he also made a public statement declaring his personal commitment to protecting Madagascar’s natural resources and biodiversity.

“We have to be jealous of our natural riches, like the lemurs in Andasibe, because they’re so important for tourism development. If we kill them, we lose money. There is a negative impact on our economic growth, especially for local populations. We have to closely protect our biodiversity,” Solonandrasana said.

“Killing or hunting lemurs is prohibited by the law, so I call on the solidarity of Malagasy people. I invite all conservation actors to work together because the fight is not easy,” Minister Johanita Dahimananjara said at the press conference.

She added that a lack of resources and forest agents complicated the poaching problem, saying the ministry planned to recruit 20 new forest agents this year. It was also announced at the press conference that authorities would increase forest patrols, especially inside protected areas, mobilizing what’s called a “mixed brigade” composed of forest agents, police, Madagascar National Parks agents and VOI members.

The government, NGOs and VOIs warned the public at the press conference that the lemurs were threatened, urging people, particularly those living in or near protected areas, to be vigilant against poaching.

The specter of organized crime

People have long hunted lemurs for local consumption in certain parts of Madagascar, but accounts of urban restaurants clandestinely serving the animals have percolated. The sheer number of lemurs killed in the recent incident raises the specter of organized crime.

“Before, there was poaching but with artisanal traps,” Lalaina Andrianavalona, national coordinator of the National Coalition for Environmental Advocacy, said at the environment minister’s press conference. “But what happened in Andasibe is an important criminal act. They used firearms. I am convinced that there is probably an important network of traffickers.”

“There are Chinese restaurants in the Tamatave area that offer lemurs as a deluxe menu item,” Jonah Ratsimbazafy, a primatologist who chairs the Madagascar Primate Study and Research Group, told Mongabay at his office. “It seems that there are code words. When someone requests ‘Mily Clément,’ it means ‘I would like to eat lemur meat.’”

Mily Clément is the name of a popular Malagasy musician.

Ratsimbazafy confirmed the existence of a lemur trafficking network, and asked Malagasy citizens to help combat it. Deterring poachers is a good step, he said, but it doesn’t go far enough. “We have to break the network by finding out who are the final [sellers] of the lemur meat. We must punish them [along with] with the poachers,” he said, adding that the suppliers of weaponry used in poaching should also be apprehended.

Poachers face severe sanctions under Madagascar law: five to 10 years in prisons and a fine of 100 million to 2 billion Malagasy ariary ($32,000 to $642,000), which would be impossible for most Malagasy people to pay. But in a country where most of the population lives on less than $2 per day, environmental crimes are not given priority in the justice system, and judges tend to be lenient with people accused of them, according to Ndranto Razakamanarina, president of the board of Alliance Voahary Gasy, a coalition of civil society organizations. “We ask the question, why do the Malagasy courts hesitate to pronounce the maximum sentences for poachers? We believe that there is corruption,” he said.

Rolland Razafindrabe, director of studies at the Ministry of Justice, denied those allegations. “We are very strict and we refuse all kind of pressures when it concerns environmental crime,” he told Mongabay. He added that law enforcement would treat lemur poaching severely.

The prosecutor for Moramanga district, where Andasibe is located, Saholimiravo Jeannine Rosa, echoed that assertion in a phone interview with Mongabay. She said she had ordered the police to continue the investigation.

The U.S. Embassy in Madagascar condemned the poaching on its Facebook page. The United States, through USAID, invests heavily in conservation in Madagascar. At Thursday’s World Wildlife Day celebration, U.S. Ambassador Robert Yamate announced the launch of a five-year, $23 million USAID program called Hay Tao, which will focus on strengthening local governance of natural resources by community conservation groups like VOIs. A press release put out by the embassy and USAID said Hay Tao, which means “know-how” in Malagasy, represented the U.S. government’s largest investment in environmental initiatives in Madagascar since it suspended its support after a coup in 2009.

This article by Riana Raymonde Randrianarisoa was first published by Mongabay.com on 16 Mar 2018.