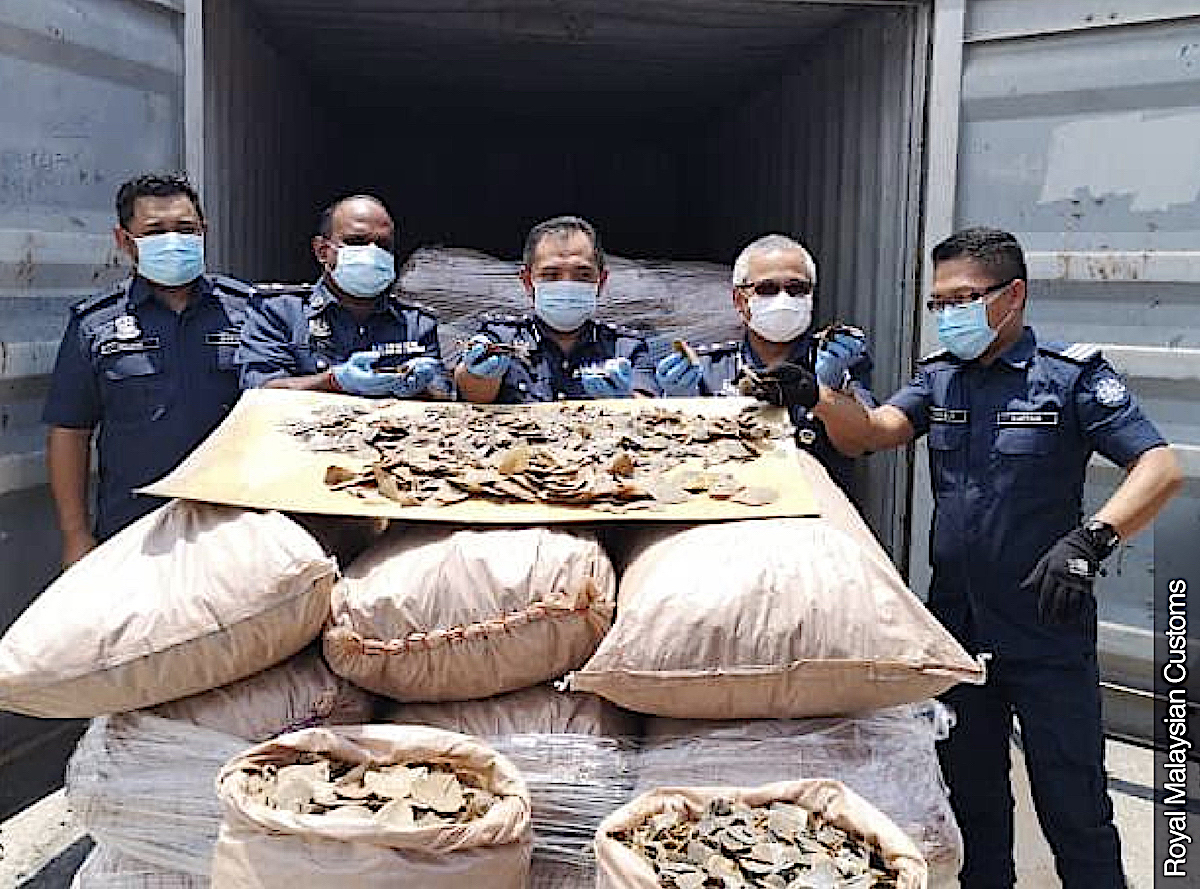 Customs authorities in Malaysia have made one of their biggest ever seizures of African pangolin scales, recovering 6 tons of the contraband in a container at the country’s busiest port.

Officials at Port Klang found the scales hidden beneath 63 sacks of cashew nuts on April 1. The shipment had been labeled as only containing cashew nuts, which raised a red flag to authorities.

This isn’t the first time pangolin scales have been intercepted in Malaysia. In 2017, customs authorities seized 2 tons of pangolin scales in Port Klang, and in 2019, wildlife officials raided a factory and warehouse in Kota Kinabalu in Sabah to find thousands of pangolins — both dead and alive — as well as more than 360 kilograms (795 pounds) of pangolin scales, bear paws and flying fox carcasses. This latest 6-ton shipment is the largest to have ever been seized in Port Klang.

The exact origin of the pangolin scales is unknown, although they certainly came from Africa based on the fact that the scales are from a mix of African pangolins, John said. A new report by the Wildlife Justice Commission (WJC) suggests that more than half of global seizures of pangolin scales originate from Nigeria.

Yet pangolins are nearing extinction in Nigeria, so it’s more likely that the pangolins come from neighboring countries, with Nigeria possibly still acting as a trading hub. Traders are also known to frequently change their routes, which makes tracing a shipment’s origins extremely hard, according to a comprehensive report by TRAFFIC.

There are eight species of pangolins: four native to Asia (the Chinese, Sunda, Indian and Philippine pangolins), and four from Africa (the ground, giant, white-bellied and black-bellied pangolins). The Indian pangolin is categorized as endangered and the three other Asian ones as critically endangered on the IUCN Red List; the ground and black-tailed pangolins are listed as vulnerable, and the giant and white-bellied pangolins as endangered. Pangolins are considered the most trafficked animal in the world, with more than a million of these animals traded since 2000.

Pangolins are mainly valued for their scales, used in traditional Asian medicine, even though they’re made from the same substance, keratin, as human fingernails and hair. In some countries, pangolins are also traded for their meat, and their scales are used for decorations in rituals and jewelry, according to a report by World Animal Protection (WAP).

The pangolin has been identified as a possible source or intermediary host of the novel coronavirus behind the COVID-19 pandemic, although this has not been confirmed. Yet the pandemic doesn’t appear to be slowing down the global trade in pangolins, or other wild animals.

“With the the country’s resources focused on dealing with the public health coronavirus pandemic, those behind this shipment probably thought they’d get one over the Royal Malaysian Customs, but were themselves caught out,” Kanitha Krishnasamy, director for TRAFFIC in Southeast Asia, said in a statement. “This hopefully shows traffickers that enforcement agencies aren’t letting their guard down during trying times. Stopping illegal wildlife trade should be part of continued, long term efforts to curb the threat of zoonotic diseases.”

This article by Elizabeth Claire Alberts was first published on Mongabay.com on 7 April 2020.