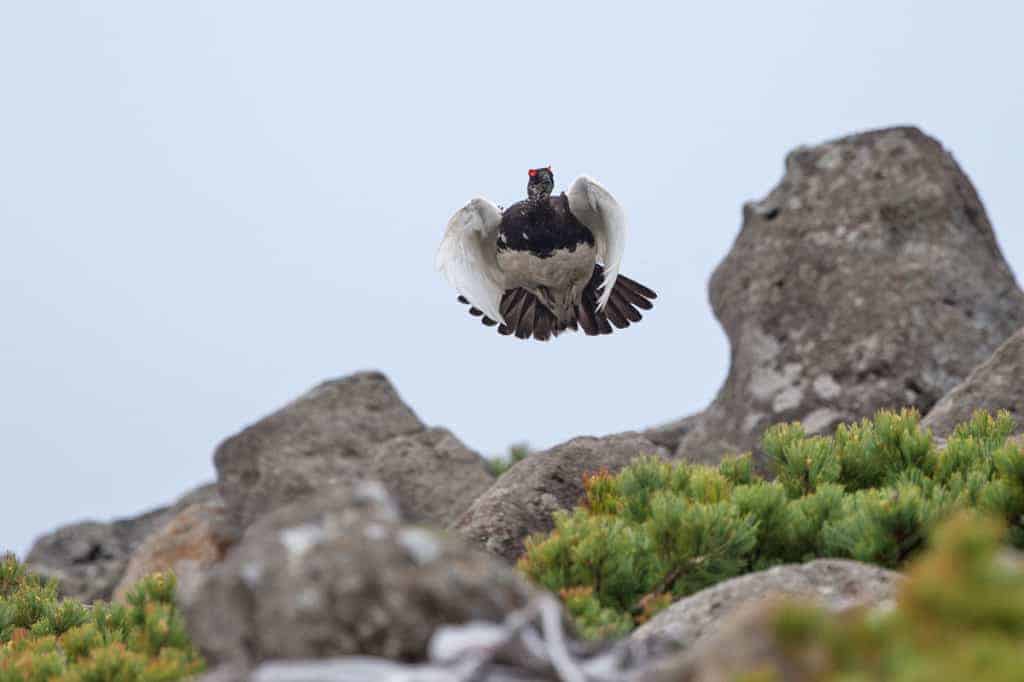 Last weekend I decided to go up to central Honshu island and search out some personal “firsts” seeing as I had a total of four days. I was planning to visit both Mt Ibuki (Shiga prefecture) and Mt Norikura (Gifu prefecture), the first location for Golden Eagle and the second for alpine birds such as Rock Ptarmigan and Japanese Accentor. However the wind forecast was bad for Mt Ibuki (no wind = no Golden Eagles flying around), therefore I only visited Mt Norikura.

Norikura is an attractive location for wildlife photographers in several respects, not the least of which is the altitude of the bus terminus. At 2700 meters, this is one of the highest road access points in Japan, so you are already well in the alpine zone before having to start lugging gear around. There are two lodges here, although only one was open for my stay. So you can leave most of your gear at your lodgings and just travel light for hikes around the summit area. Additionally, there are several interesting target species. Apart from birds, the area is home to Asiatic Black Bear, Japanese Serow, some smaller mammals and also several rare species of butterfly. So spending a week on the mountain could be very rewarding. Alas, I only had one afternoon and one morning for my tight schedule!

The first afternoon was cloudy and misty, but no rain and not much wind to speak of. I thought the conditions would be perfect for my main target, Rock Ptarmigan. These birds are more active in times of poor visibility, when they are protected by the fog from the sharp eyes of Golden Eagle and Mountain Hawk Eagle. But I couldn’t hear any calling, and also failed to locate any of the birds. The Norikura area holds around 50 pairs, but they are usually a bit shy, perhaps because they were hunted a lot when the area was used as a military research station during WWII.

Although the Rock Ptarmigan was a no-show, I did have very close encounters with both Japanese Accentor and Alpine Accentor. Many Asian House Martin were buzzing past my ears, while a few Pacific Swift flew around at a more reasonable altitude.

The next morning I was out for the dawn, which was magnificent! There was a sea of clouds nicely lit by the first rays of sunlight, while to the east the famous peaks of Japan’s Central Alps were clearly visible. Yarigatake and Oku-Hodaka were instantly recognisable.

Also instantly recognisable was the outline of a male Rock Ptarmigan silhouetted against a ridge line! I moved to the left as far as I could and took a few shots, but it heard the camera in the silence of the early morning and promptly dropped out of view.

I then heard the distinctive call of a Spotted Nutcracker and located it among some rocks. I could get a few shots but it was heavily backlit and kept on the sunward side of me. But I had successfully photographed all four of Norikura’s target species!

I returned to the lodge for breakfast and then decided that I might as well climb the highest peak (Kengamine; 3026 metres). However, on the way I heard two male Rock Ptarmigans calling so I sought them out and found them quite close to the main trail.

The clouds and mist were closing in, but I was able to get some good shots of them arguing over their territories and was even able to take an image of one in flight. There was not much wind at all, so no chance of seeing either Golden Eagle or Mountain Hawk Eagle, both of which need reasonably strong winds in order to soar around the high mountain peaks.