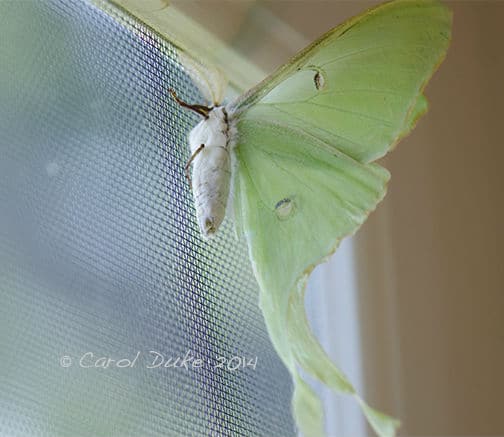 We humans are creatures of habitual repetition and it is a reliable assumption that bynightfall most people are indoors with lights on and doors closed to the outside world. When we accidentally or purposefully leave our outside lights on, it is somewhat like fly fishingwith the bright light being the lure. Many night beauties will be drawn to the light and will fall into a deep sleep making them vulnerable in the morning.

Just before dawn birds find these Saturniidae or giant silk moths easy prey. The Luna Moth Actias luna sleeps all day only normally these ethereal creatureswould be hidden somewhere in a crevice or beneath a leaf or wherever a lunafinds to safely sleep away the day after cruising around all night. Daylight takes over whenthe man-made light fades. There is no escape for the exquisite luna or other members of the same family caught in the spell of light induced sleep.

I discovered this when watching Catbirds going back and forth to the back door of our old farmhouse. I quicklyrealized that when I left the outside light on the night beforeto frighten the bears away from the Tree Swallow nest box, I had put other creatures at risk. I foundthis Luna Moth Actias luna, sleeping near the door and brought the maleinside away from the pointy beaks of birds. Looking again I found another one and brought that one inside too.

Holding eachluna on my open handlater that evening, Iwatched the most beautiful moths I have ever encountered flap theirlarge translucent wings. They carriedtheirwhite fuzzy bodies out into the darkness anddisappeared like delicatespirits. I wonder how they see each other . . . is all that beauty wasted in the dark. I would think that since they are night creatures their vision must be adapted for seeing in the dark. Surely all that diaphanous beauty is to please luna moths and we are just lucky if we chance to see themtoo. Nature is quite a marvel.

Luna moths have no mouth parts. They have a singularlife purpose of sleeping all day and seeking mates all night. Females spray a pheromone perfume to attract the males.Their ghostly gossamer, pale-green wings are adorned with striking eyes and when they fly into your life it is a special visit from one of nights elusive beauties.

Both the luna above and below are males. I can identify them as males because theantennae are wide and resemblefeathers. The female antennae are thinner as you can see in the last photograph. This is true for most moths in general. The two males came into my life on June 22, 2014.

The adult maleabove almost did not make it. Perhaps a bat took part of his tail which is part of his hind wing. And I had thought those long tails were merely a refined detailto please a luna’s eye. Clearly it also gives the moth another chance if some other creature is trying to grab it.

As moths the luna only lives about a week. They mate and the females will lay eggs over the next few nights on White Birch here in our northeastern gardens. Hickory trees might do as well and the adult moths will soon die leaving their eggs and later larva to carry on their species.

The name luna comes from the moon-shaped eyes on the hind wings.

We have many bad habits in how we care for our world and trying to throw light over everything outdoorsduringthe night is one of them. We might consider that the darkness is also a wildlife habitat. Light pollution may interfere with the normal mating habits of Luna Moths and other moths of their family and is causing concern for their survival. The female above came to the light the night after the two males.

I decided to turn off the light at night and hoped the bears would leave the Tree Swallow nest box standing. In the end it was a large spider that scared the Tree Swallows away from their nest and four eggs. But that is another story.

Flooding the night with harsh light also hides amazing displays of fireflies. This year we had amazing shows every night for most of June and well into July.

Avid moth seekers take a sheet and light and go exploring out into the dark. They discover many species that live in their nighttime wildlife habitat. This is a temporary observation session and the light goes off after the study. I unknowingly had created a study of my own with ourbackdoor light. I may do it again to see who is flying around but will turn it off after a couple of hours. Once the light goes off the moths wake up and fly out into their normal way of being in their night habitat.

Here at Flower Hill Farmwe will continue toturn offour outside lights toenjoy the firefly shows and imagine the darkness filled withexquisite beauties such as Luna Mothsflying through layers of blacknessas they are meant to.