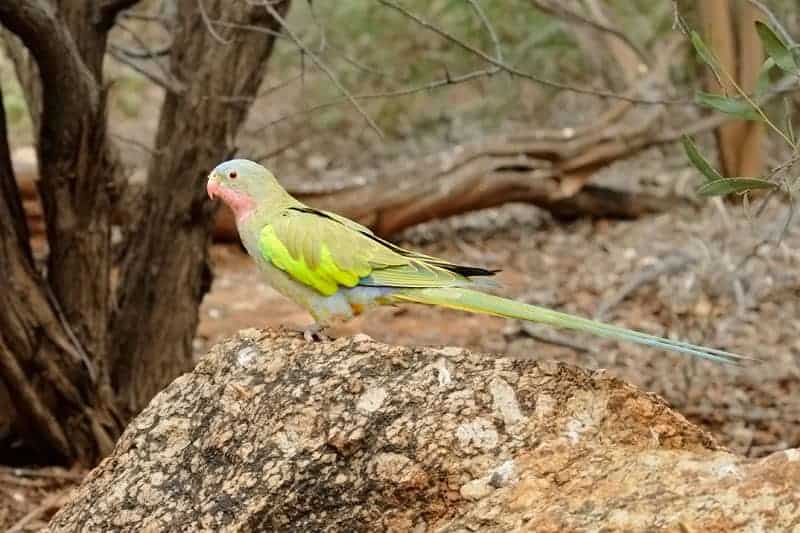 Alice Springs – Wycliffe Well – Before heading out further afield we decided to spend a day in Alice Springs to visit the Desert Park to see the endangered Princess Parrot. While I don’t particularly like viewing wildlife in captive settings, the Desert Park has walk in aviaries that are more like spacious islands of native habitat that only house the species that naturally co-occur in a given habitat type.

Princes parrots (Polytelis alexandrae) are one of Australia’s most elusive parakeet species, and therefore least known. They are a nomadic species that arrive in an area to breed and then disappear,making them very difficult to see in the wild.

From the Desert Park we got back on the road for a long drive to Wycliffe Well – pretty much the only camping stop between Alice Springs and Mataranka. It is also a convenient overnight stop for visiting Devil’s Marbles in the morning. Wycliffe Well is known as Australia’s prime UFO hotspot, boasting more UFO sightings than any other area in the country. The entire holiday park is decked out with the alien theme.

We didn’t spot any notable wildlife on this drive, with an exception of a Little buttonquail (Turnix velox) on the side of the road and a Brown snake (Pseudonaja sp) at the camp site. No aliens either this time.

Devil’s marbles is a spectacular formation of rounded boulders stacked precariously on top of each other. Though it lies close to the tropical north of Australia, this area still has a rather dry climate and provides a unique habitat for a wide suite of species.

As we pulled in to the car park we were greeted by a Dingo that was quite happy to laze around in broad daylight.

Amongst the rocks of the Devil’s Marbles we were treated to a rare sight of a pair of courting Painted finches (Emblema pictum). As part of courtship the male of this species present the female with a gift of some nesting material – dry grass or small twigs. Holding the gift in his beak he then proceeds to perform a dance around the female until he sees a favourable sign.

Once his efforts are approved by the female, he gets down to business.

While the amorous partis a fairly quick affair, the pair stays together and continues to build the nest.

The finches’ antics brought in a curious visitor – one of Australia’s smallest birds – a Weebill (Smicrornis brevirostris).

The Spinifex grass at Devil’s marbles is home to the aptly named Spinifex bird (Eremiornis carteri).

There were also a few Dimond doves (Geopelia cuneata) amongst the rocks.

The road from Devil’s Marbles to the tropic of Capricorn marker turned up a wide variety of birds of prey: Australian hobby, Black kite, Grey falcon and Spotted harrier.

The tropic of Capricorn marks the formal transition to the tropical North of Australia and the next part of this blog.