Wetland birds have a particular niche in the bird world having adapted well in finding food sources at marshes, lakesides, bogs, riverine habitats and agricultural land.Herons, Storks, Ibises and Flamingoes have been classified under one sub group in the taxonomic order of birds in the Western Palearctic. This area (below) is one of eight zones that have been divided and named on the Earth’s surface.To read more about the Western Palearctic and learn which birds are listed please click here

I’ve put together photos of all the birds in this group that come under this heading in the WP list. It may be helpful for visitors to check what birds can be seen on the Iberian peninsula and to read some notes about each species.

Field Description.Summer visitor. 28-36 cm. Differs from other herons by very small size, blackish crown and back, and conspicuous isabelline-white wing patches, contrasting with the black of the rest of the wing and back. Crown and back of male glossed green. Plumage of female duller and with dark streaks on throat, foreneck and underparts. Bill yellowish; legs green. Young resemble female but plumage more mottled and streaked. Usually flies low, with fairly rapid wing-beats, neck withdrawn and legs extended. Secretive bird, active mostly towards the evening.Voice. Various short, croaking notes. Spring song of male a persistent “how, how”, or “woof, woof”.Distribution. Local breeding species; in many areas precise distribution inadequately known.Habitat. Occupies reed-fringed lakes and pools, freshwater swamps, riverain zones; especially in areas where reeds are mixed with other emergent plants, or trees and shrubs, such as willows Salix and alders Alnus.Food. Diet varies with locality and time of year but consists primarily of fish, amphibians, and insects. Prey is captured while waiting in cover, or by slowly stalking through water.

Field Description.Common Resident. 48-53 cm. Appears white at distance. Somewhat smaller, more compact, and with shorter neck than Little Egret; distinctive heavy jowl. In breeding season, long tufts of pink-buff to orange-buff feathers on crown, throat and mantle conspicuous at close range. Non-breeding plumage white. Bill yellow with red base in breeding season, legs reddish; in winter, legs and bill yellowish. Juvenile white, without tufts of elongated feathers, and with yellow bill and yellow-green legs.Voice. During the breeding season various croaking calls.Distribution. Breeds locally in very small to fairly large colonies.Habitat. Breeds in or below tops of medium-sized deciduous trees or in thickets in lowland areas. Feeds on pastures, semi-arid steppes, arable fields, banks of rivers, ponds, lakes, etc., usually close to herds of cattle or other livestock; least restricted to aquatic habitats of European herons.Food. Prey consists mainly of insects, captured on wet or dry land or in shallow water, usually where cattle or other large mammals are present. 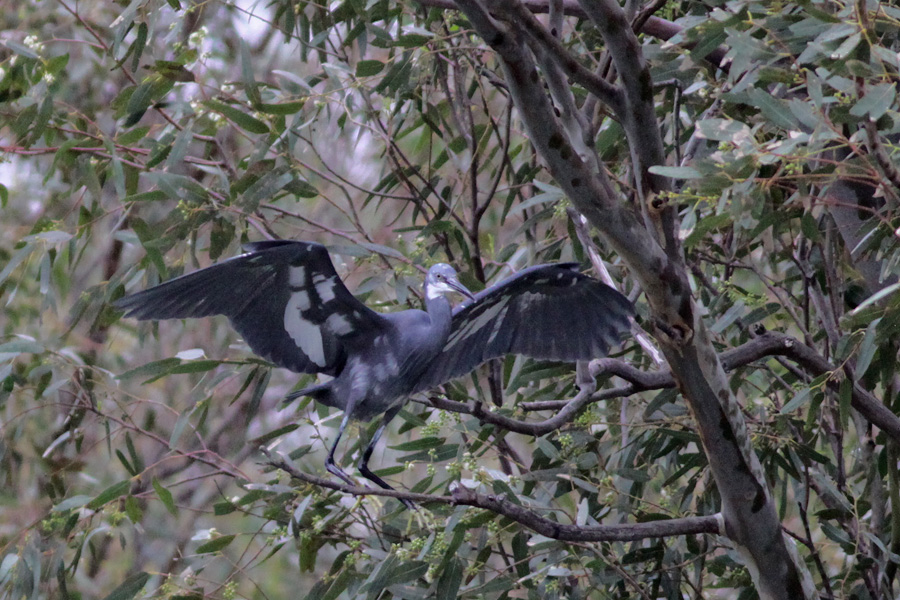 There are continuing reports of hybridisations of Western Reef Egret Egretta gularisand Little Egret Egretta garzetta. The Western Reef Egretwhich occurs in West Africa has been spreading north from Senegal.This is one such hybrid bird I photographed (above) near Puerto Real a few years ago. Offspring can be very variable in colour and markings.Similar cases of hybridization were recorded in Thyna/Sfax, Tunisia (H. DlensiinIsenmannet al. 2005), in l’Albufera de Valencia, Spain (Dieset al. 2001) and in the Camargue, France (Kayseret al. 2000).and several recordings such hybrids have bee recorded in Morocco atEssaouira and the nearby Oued Ksob estuary,archipelago (Mogador).This has been published recently in the journalAlauda.

One of the most recent Moroccan reports was atMerja Zerga, February 2013 byJavier Elorriaga Tarifa, Spain

Field Description.Visitor and increasing throughout the year.85-102 cm. Large, slender, immaculate white heron, with long thin neck and long plumes on upper breast and base of neck; no plumes on head. Loose white plumes also on scapulars when breeding, extending over back. Upper leg turns blood-red during breeding season. Legs and toes black; bill yellow during most of the year, but black with green-yellow base in breeding season. Juveniles like non-breeding adults, but without plumes.Voice. Occasionally a croaking note; more vocal at colony, where uttering a number of cawing sounds.Distribution. Breeds solitary or in small colonies; rare.Habitat. Breeds in extensive, dense reedbeds or other tall aquatic vegetation, or in shrubs or low trees. Forages in lowland meadows, marshes, depressions, floodlands, etc.Food. Diet varies with time of year; in the wet season consists mainly of fish and aquatic insects, in the dry season small mammals and terrestrial insects. In shallow water, prey is taken after slowly stalking with body held horizontally, or after standing motionless with stiff neck and leaning forward, thus waiting for prey to come within striking distance. 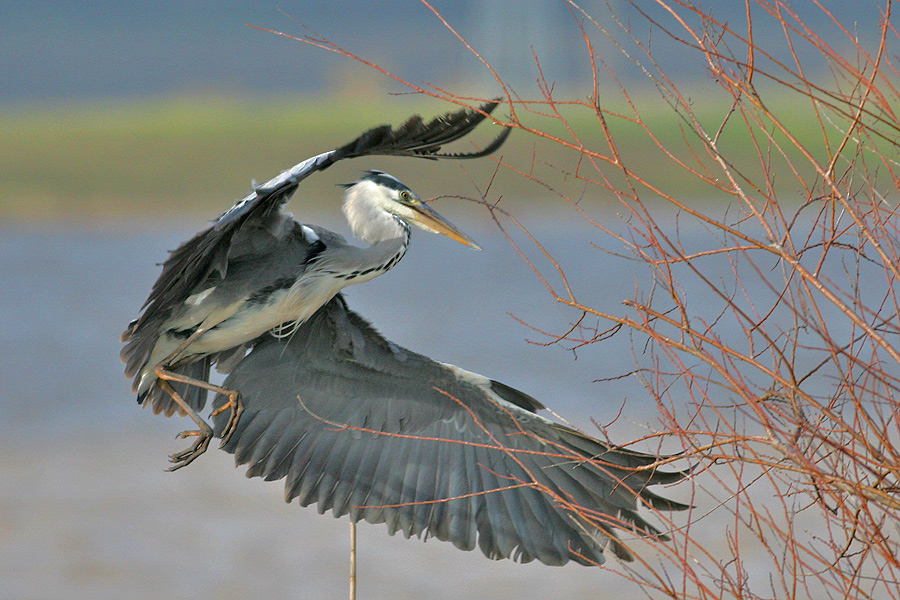 Field Description. Resident.90-98 cm. Differs from other herons by large size, grey upperparts, white head and neck, black band of loose feathers running back from the eye to terminate in a long, pendant crest; underparts greyish white with some black at the sides. Bill large, yellow; legs brownish. Bill and legs pinkish in the breeding season. Juvenile with more uniform grey plumage and no black on head. Usually stands motionless in or near water, either with neck stretched or with head retracted between “shoulders”. Flight silhouette with retracted head and large neck (forming a bulge), long, broad and rounded wings, and protruding feet.Voice. Usual note a loud, harsh ‘rhaaa’; in breeding season at colony, a variety of squawks, yelps, and raucous notes.Distribution. Rather common breeding bird, in small to large heronries.Habitat. Usually nests in tall trees; frequents almost any kind of country with shallow waters affording it a suitable food supply. Food. Largely feeds at daytime, taking mainly fish, amphibians, small mammals, insects, and reptiles and occasionally crustaceans, molluscs, worms, and birds. Prey captured by grabbing or stabbing while slowly wading or standing at water’s edge. 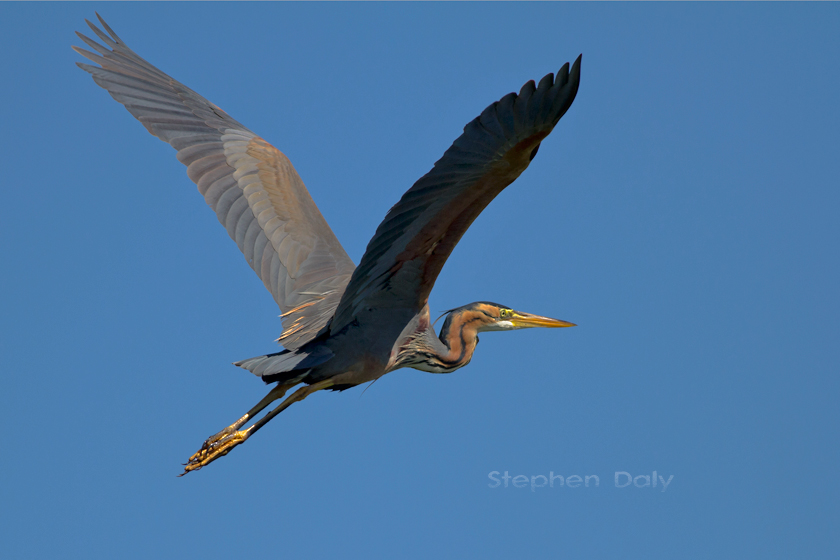 Field Description.Summer Visitor. 78-90 cm. Differs from Grey Heron in smaller size, and at short distance by decidedly darker plumage. Back and wings slate-grey, with scapulars elongated and pale chestnut in breeding season. Crown and crest black; breast chestnut with some black at sides; strongly striped, rufous neck. Juveniles more sandy, with chestnut crown and without black stripes on head and neck. Head and neck more “snaky” than Grey Heron. In flight with coiled neck and more marked concavity where base of neck joins breast, and with longer toes than Grey Heron; also flies with more rapid wing-beats.Voice. Similar to that of Grey Heron, but generally silent away from colony.Distribution. Local breeding bird of small to relatively large colonies.Habitat. Breeds in wetlands with tall and dense standing vegetation, often with scattered trees. Prefers shallow, eutrophic waters with level bottom free of rocks or other hard obstructions, and with densely vegetated fringes.Food. Feeds during early morning and evening on fish and insects, which are captured from a stationary position; also takes some small mammals and amphibians. 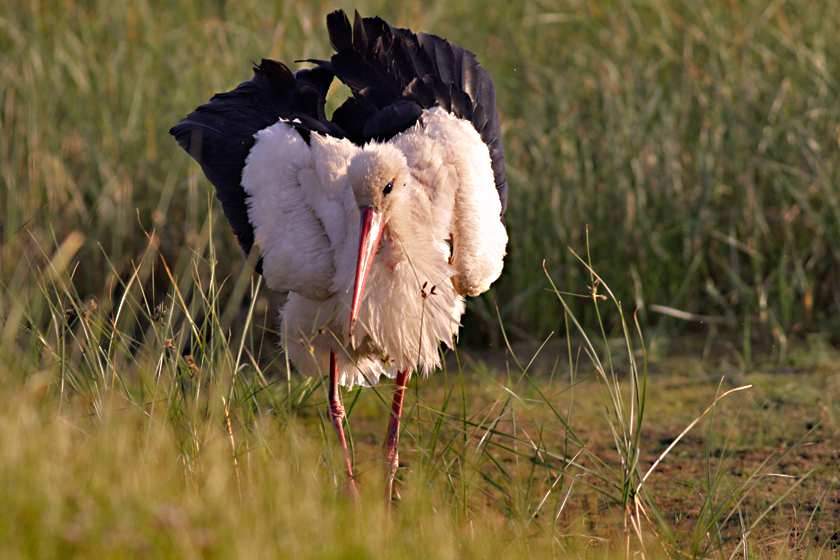 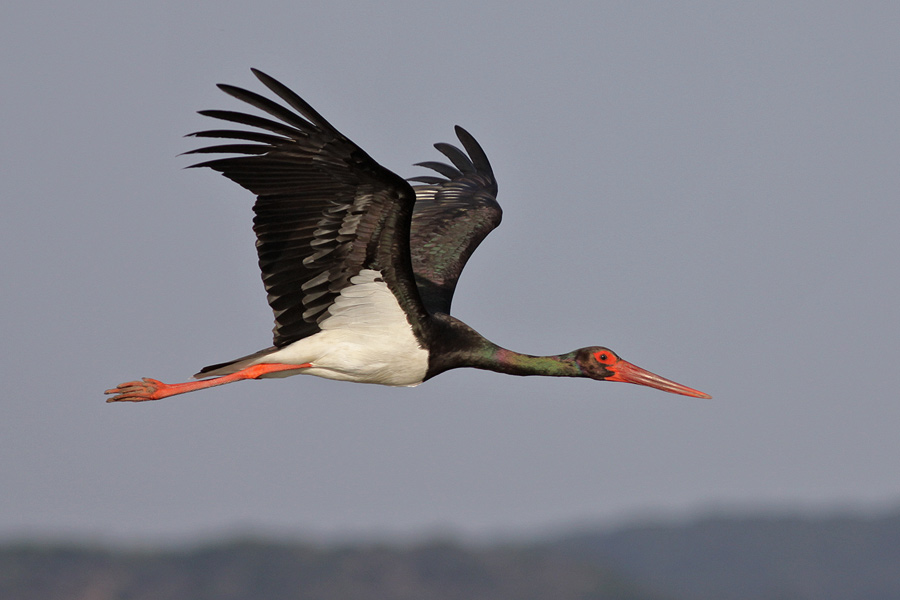 Field Description.Scarce Migrant.95-100 cm. Form, flight and carriage as White Stork, but plumage mainly glossy black, except for the white breast, belly, and under tail-coverts. Bill and legs red. Usually shy and solitary in habits. Juveniles browner on head and neck, and upperparts less glossy; legs and bill grey-green.Voice. On nest a clear and drawn out “chee lee chee lee”.Distribution. Regular breeding bird, mainly in eastern part of the area.Habitat. Builds nest in large old trees, on cliff ledges or in caves. Prefers undisturbed forested areas with streams, pools, swamps and banks of rivers.Food. Mainly fish, but also frogs, salamanders, insects, and to a lesser extent small mammals, crustaceans, snakes, lizards. Feeds by stalking through water. 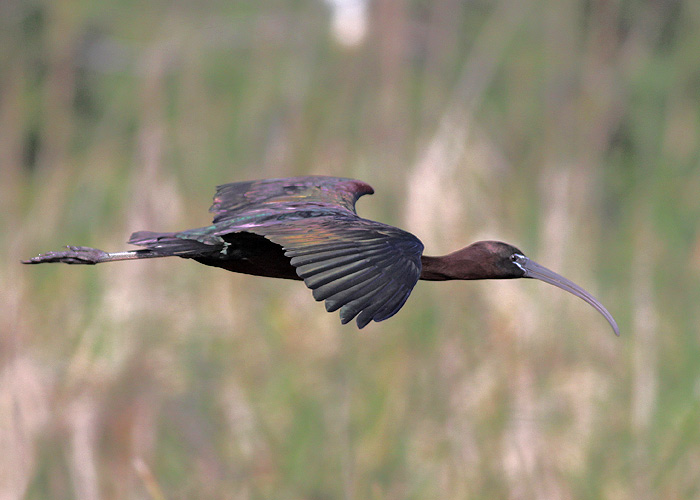 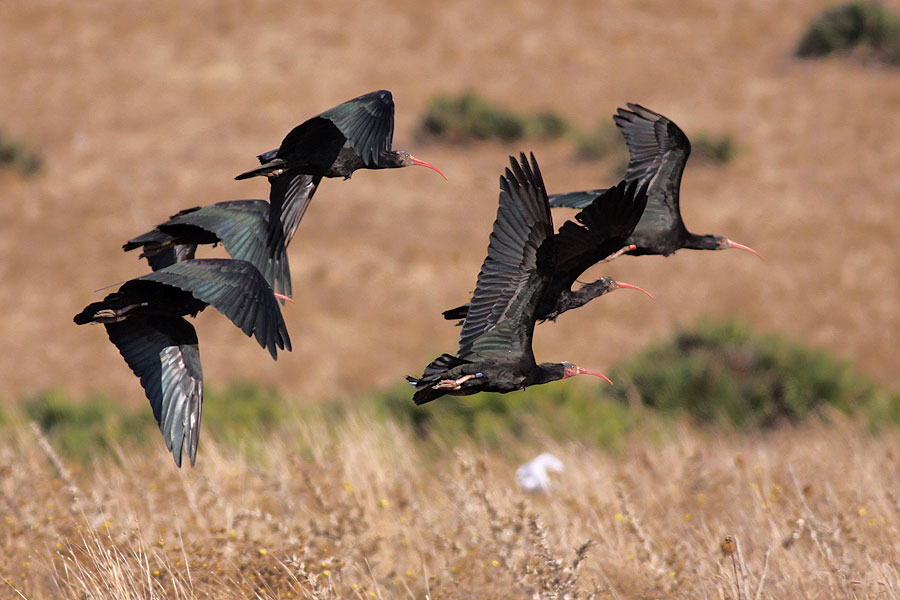 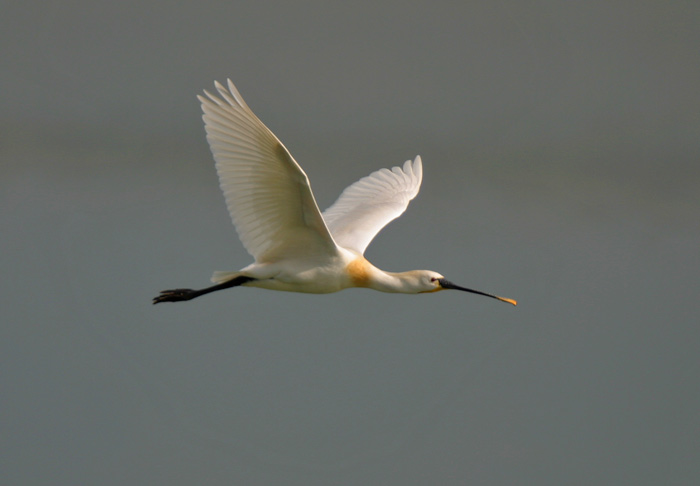 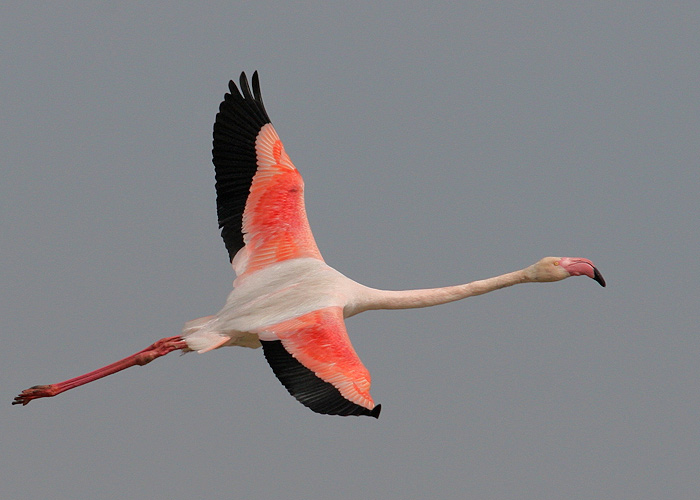