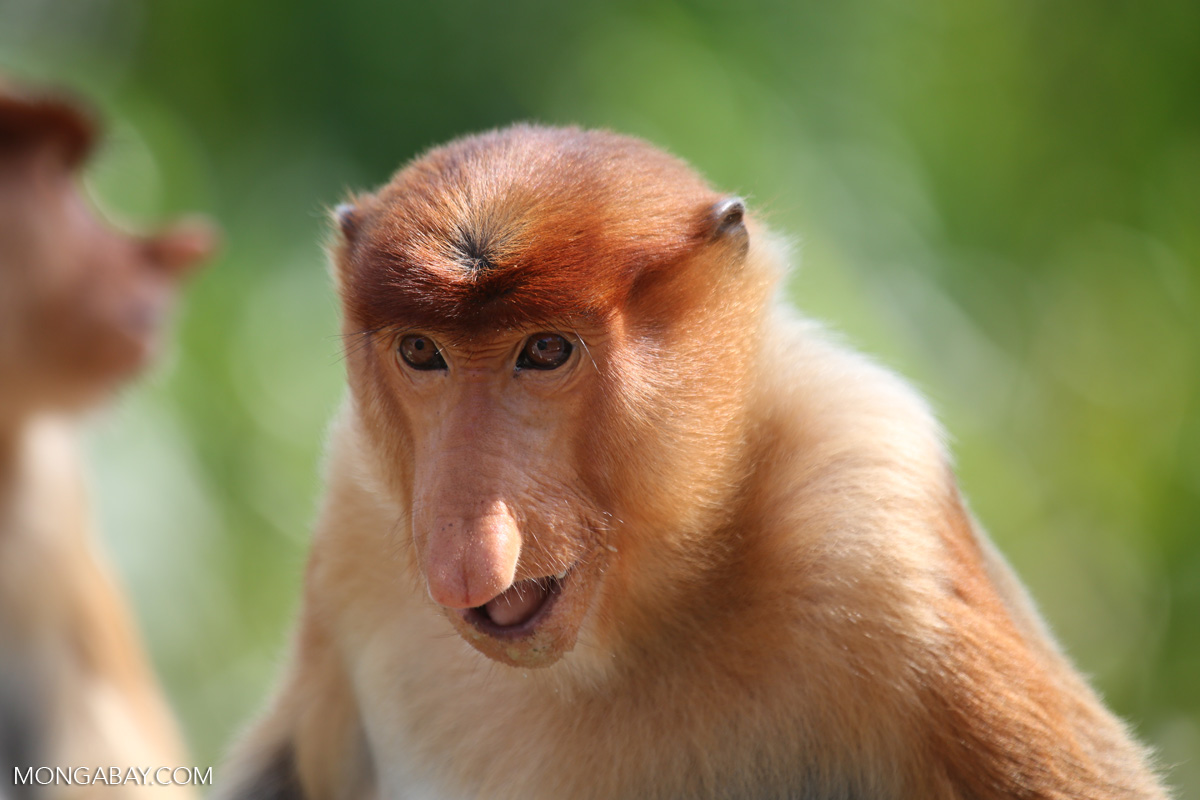 JAKARTA — The oil palm processing industry has become the biggest threat to the iconic and endangered proboscis monkeys of Indonesian Borneo, a new study has found.

The study, published in the journal Global Ecology and Conservation, analyzed the loss of habitat of the proboscis monkey (Nasalis larvatus) in Balikpapan Bay, home to one of the largest populations of the species, using data from 2000 to 2017.

The main cause for that loss up until 2007 was land conversion for palm oil plantations, affecting primarily non-mangroves areas.

After 2007, the rate of habitat loss due to plantation development slowed down substantially because of a scarcity of suitable land.

What followed instead was a boom in the palm oil processing industry, represented by a slate of bulking stations, refineries and biodiesel plants that are already operating or under construction.

“Once most of the suitable land was converted to plantations, the subsequent industrial expansion became the most considerable threat to proboscis monkeys in Balikpapan Bay,” the report says.

The industry flourished in Balikpapan, one of the largest cities in Indonesian Borneo and home to a bustling port that can accommodate palm oil bulk carriers.

The nature of habitat loss brought about by the palm oil processing industry is vastly different from that associated with oil palm plantations.

For one, industrial expansion leads to loss of both mangrove and non-mangrove forests. And it tends to cause widely scattered deforestation because of the need to build expanded infrastructure, such as ports, power lines and, in particular, roads.

That translates into not just loss of habitat for the proboscis monkey, but also fragmentation of its remaining populations and the attendant impacts, including loss of access to food resources.

The study cites the case of the Somber River, located right next to the city of Balikpapan. The river is a non-mangrove area where the proboscis monkey lives. But it has been highly degraded, with many of the native Sonneratia albaman grove trees dead.

The report describes the situation along the Somber River as “rather alarming,” given that the mangrove trees represent the single main food resource for the monkeys living in the highly fragmented habitat.

“Instead of the total habitat, the availability and access to key food resources may determine the future development of the population,” the study says.

Even as it’s been overtaken by industrial expansion as the main cause of the loss of proboscis monkey habitat, clearing of land for oil palm plantations continues to be a major problem, the study says.

And third-party “sustainability” certification isn’t a check on the problem: most of the companies responsible for the loss of monkey habitat in Balikpapan Bay are members of the Round table on Sustainable Palm Oil (RSPO). In fact, all of the concessions managed by RSPO members continued clearing land after 2005, according to the study.

Findings like these call into question the effectiveness of the RSPO as a check on the environmental destruction associated with the palm oil industry, given that habitat clearance constitutes a violation of the RSPO Principles and Criteria. Under those rules, all proboscis monkey habitats are classified as a high conservation value (HCV) forest because of the presence of rare, threatened or endangered species.

“It does not seem that the membership in RSPO plays a major role in halting the forest loss in either plantation or industrial concessions,” the study says.

But it also says that the destroyed habitat can still be rehabilitated, including the land cleared by PT AIEK-Goodhope Asia Holdings Ltd.

“If the corporation decides, either voluntarily or under pressure by RSPO, to restore this habitat, they would instantly turn from a major destroyer to a pioneer in proboscis monkey conservation in Balikpapan Bay,” the study says.

In response to the findings, the RSPO confirmed that Goodhope was one of its members and that its local venture partner, PT AIEK, was not certified.

“Additionally, we found that no formal complaints have been lodged through RSPO’s Complaints and Appeals system against PT AIEK, nor its parent company,” the RSPO told Mongabay.

But even without a complaint being lodged, the RSPO said all its members were expected to abide by its rules, regardless of whether or not they were certified.

Realistically, though, the rate of habitat loss looks to increase in the coming years, with the government planning major projects to turn the area into an industrial powerhouse. These include plans like an extension of the Kariangau industrial park, which would involve large-scale clearing of coastal forests.

Under Balikpapan’s latest municipal zoning plans, non-mangrove forests within the industrial park have been allocated for industry, with the mangrove forests untouched. Activists have criticized the expansion plan, saying it could lead to further loss of habitat for numerous species, including the proboscis monkey.

The government also plans to develop another industrial estate in the neighboring district of North Penajam Paser, which will overlap with a large area of existing proboscis monkey habitat.

Another part of North Penajam Paser will also be home to Indonesia’s new capital city, which President Joko Widodo announced last year would be relocated from the chronically congested and fast-sinking Jakarta. Environmental activists have voiced concerns that the relocation and attendant construction boom will spell doom for several endemic species, including the proboscis monkey. The new study also raises this point, saying that the move “is likely to result in the next dramatic change in the rate and causation of the proboscis monkey habitat loss in Balikpapan Bay.”

President Widodo claims the new capital will be designed in such a way to minimize disruptions to the proboscis monkey, while the minister of public works, Basuki Hadi Moeljono, has promised to review the infrastructure development plan to protect the species.

The initial plan was to build transportation infrastructure in Balikpapan Bay to channel construction supplies inland to the new capital. But after learning that Balikpapan Bay is a natural habitat of the proboscis monkey, Basuki said he changed the plan.

“[The habitat] can’t be touched,” he told local media. “[We] have to build the connectivity first.”

This article by Hans Nicholas Jong was first published on Mongabay.com on 8 January 2020.