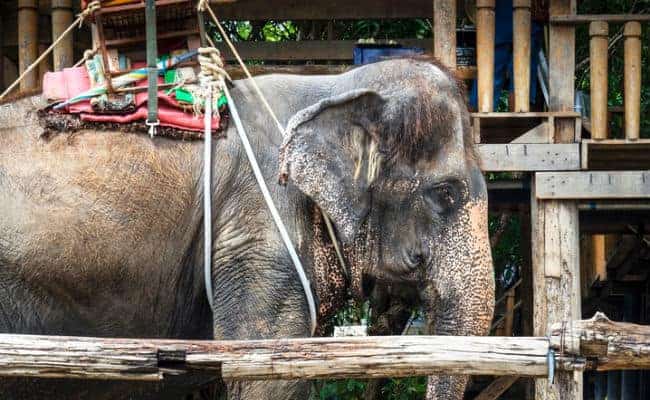 Businesses in Asia have often justified so-called elephant tourism by arguing that the industry benefits elephants and helps safeguard this endangered animal. But new research shows that elephant tourism is actually rife with cruelty.

The survey, conducted by internationally recognized animal welfare group World Animal Protection, found that three out of every four elephants recorded at elephant tourism sites across Asia lived in what the group describes as”harsh” conditions.

In total, 80 percent of the3,000 elephants examined at entertainment sites in Cambodia, India, Laos, Nepal, Sri Lanka and Thailand endured sometimes squalid living conditions. Many were also used to provide rides for tourists, forced to wear poorly-fitting steel or wooden saddles and tied to very short chains when not in use.

The cruel trend of elephants used for rides and shows is growing – we want tourists to know that many of these elephants are taken from their mothers as babies, forced to endure harsh training and suffer poor living conditions throughout their life.

There is an urgent need for tourist education and regulation of wildlife tourist attractions worldwide. Venues that offer tourists a chance to watch elephants in genuine sanctuaries are beacons of hope that can encourage the urgently-needed shift in the captive elephant tourism industry.

A major issue for elephant tourism is that host countries often bill the industry as a force for conservation. The Asian elephant is under threat, with as few as 50,000 wild elephants remaining across the entirety of Asia — due in large part to habitat loss and poaching.

But, in reality, the elephant entertainment industry often takes baby elephants from the wild and puts them through stressful training — known to outsiders as “the crush.” In order to ensure that the massive animals can be controlled when they are older, the process usually entails developing the elephants’ fear responses and keeping them heavily tied up.

In fact, 77 percent of the captive elephants recorded in this research spend their days and nights chained up whenever they weren’t being used for shows or tourist rides. They were also forced to endure highly solitary conditions which, for social beings like elephants, goes against their most basic needs.

The research revealed that, despite what many elephant tourism businesses claim, few elephants had access to the varied diet they need to remain healthy in captivity. And few had access to proper veterinary care.

While animal tourism businesses may insist that it is in their best interest to ensure that their elephants are well cared for, the reality is that this simply isn’t the case.

And inelephant tourism in Thailand, where the industry has grown over the past ten years, remains incredibly concerning.

To give you an idea of what “elephant tourism” actually entails, UK singer and entertainer Alesha Dixon traveled to Thailand for World Animal Protection to experience an elephant show for herself. The footage she and the WAP team captured includes elephants performing balancing tricks that are not part of their natural behavior.

These scenes may be distressing, but the video also highlights the good work that WAP-associated sanctuaries are doing to help elephants in the region:

What can we do to stop elephant tourism?

In the West, we can pressure tourism agencies to stop carrying advertisements for any packages that either directly endorse elephant tourism excursions or facilitate them as part of broader holiday experiences. These efforts are especially crucial, given the direct link between Thailand’s tourism growth over the past decade and a rise in elephant tourism sites.

In terms of elephant conservation, we must urge legislators to ban this form of tourism and ensure that those who are employed by the industry can transition to work at elephant sanctuaries. After all, similar initiatives have proven to be successful in Africa. With proper funding and oversight, these efforts could help repurpose cruel tourist operations into conservation projects that actually help Asia’s enigmatic elephants.

We invite you to share your opinion whether Asia’s elephant tourism should be banned? Please vote and leave your comments at the bottom of this page.