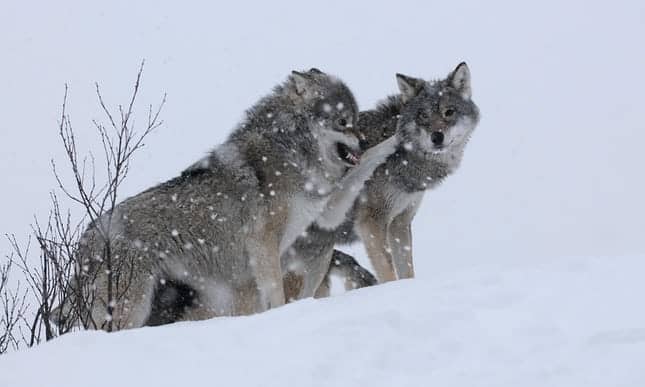 To some it is a roe deer that eats meat: an adaptable animal capable of living peaceably alongside humans. To others it is a demonic killing machine that ruins farmers – and whose presence is a symbol of the city’s contempt for rural life.

The wolf is on the rise in Europe. This winter it finally reconquered Belgium, the last mainland European country from which it had been absent after decades of persecution.

After crossing the Alps from Italy to France in 1992 and from Poland into Germany at the turn of this century, the wolf has slipped into densely populated territory where people have no memory of living alongside it.

Experts say Germany’s wolf population is growing “exponentially”– and spreading, into Luxembourg, the Netherlands and Denmark, which discovered its first wolf pack for 200 years last spring.

The wolf is protected by EU law but a rising tide of hostility is encouraging some politicians to push to kill it. France approved a cull of up to 40 wolves following protests last year. When Germany’s wolf population reached 60 packs, its agriculture minister recently argued that numbers must be regulated by culling. Finland has culled its wolf population down to 150, and this winter Norway is slaughtering about half of its wolf population of less than 100 animals.

The cull sparked protests in cities and towns across Norway last weekend after the courts rejected a legal challenge to the cull by WWF Norway. Conservationists are appealing against the decision but the next court date is in April – after the wolf hunting season has finished.

The Norwegian government wants just four to six litters of wolf puppies each year. “We will be keeping the population down to a level that is critically endangered, which we think is against the law,” said Ingrid Lomelde, conservation director for WWF Norway.

According to Lomelde, the resurgence of hostility to the wolf is driven by political parties seeking votes in rural areas. “There is a perceived conflict between rural and more urban areas. The wolf became the symbol of how people in rural areas would like to take that power back and have less centralised decision-making,” she said.

But for Erling Aas-Eng, a farmer and head of the farmers’ union in Hedmark, where wolves are particularly numerous, the wolf demonstrates the gulf between town and country. “This distance is growing. One generation back, everybody had a grandmother living in rural areas. Now our lives are not familiar to people living in the big cities anymore.” 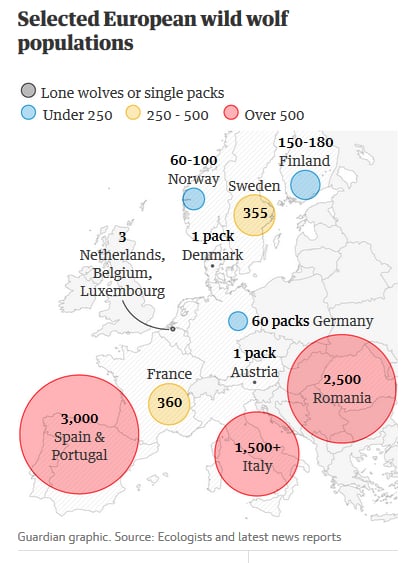 Norway’s government offers financial support to help wolf-troubled farmers switch from sheep to cattle but it is difficult to change business models and summer pastures won’t always support cattle instead of sheep, according to Aas-Eng. Norway’s upland pastures aren’t lush, so flocks can’t be securely fenced in small areas like in other European countries. “We need a lot of wires and a lot of electricity and most of the time the wolf finds a way through the fence,” said Aas-Eng.

Many farmers would rather Norway’s small wolf population was non-existent. “Our point of view is we shouldn’t have wolves in Norway,” said Aas-Eng. “The original Scandinavian population died out in the 1950s. These wolves are reinvented from the big Finnish-Russian wolf population. It’s not a good idea to allow them in. It makes for big conflict.”

Since the first wolf pack arrived in Saxony in 2000, Germany has led the way in how to adapt to the return of the wolf.

Many German states have “wolf commissioners” who work with farmers to provide them with electric fences and livestock guard dogs. Farmers receive financial support (up to €15,000 (£13,000) over three years in Brandenburg) and generous compensation for dead livestock. In Saxony, a management plan ensures that “problem” wolves that prey on livestock or get too close to humans are GPS-collared to understand their behaviour and may be deterred with rubber bullets; shooting a “problem” wolf is a last resort.

Public education has encouraged acceptance. The government-funded Wolves in Saxony programme educates local people, takes wolf scats into schools (studies show the German wolf’s diet is roe deer, followed by red deer and wild boar) and children pretend to be wolves or deer in role-playing games. In 2006, 84% of the public in Saxony was positive or neutral about wolves but, as the wolf population rises, Philipp Kob of Wolves in Saxony says that figure will have fallen. What happens next? “There is an ecological level where the wolf will get to a stable population but the other question is where the acceptance level of the human population is,” said Kob.

Valeska de Pellegrini, wolf commissioner in the German state of Brandenburg, is hopeful. “If we are not used to something, we are afraid,” she said. “When the wolves are new to an area, there is lots of hesitation and people don’t like to have the wolf but if they learn to coexist over the years, people get more friendly with the wolf. But if the political system goes in another direction I’m afraid that it will be a bad time for the wolf.”

The future must be “land sharing”, where humans and wolves co-exist in densely-populated areas, according to Guillaume Chapron, associate professor in ecology at Sweden’s University of Agricultural Sciences.

While Chapron praises German efforts to adapt to the wolf, he said the rest of Northern Europe “is a model to avoid for predator conservation”. He detects more willingness to live alongside wolves in southern Europe, particularly with 3,000 wolves on the Iberian peninsula.

“My intuitive understanding is that in Nordic countries we expect society to be working perfectly, rules are followed and the government takes care of everything. When you have a trouble-making species in a society where everything is supposed to work perfectly, that’s very disturbing. In southern Europe we accept society to be a little bit messy. When wolves create problems, it’s just how life is supposed to be.”

According to Chapron, Europe must learn from Africa. “It’s insulting to the world that one of the richest countries, Norway, cannot have more than 50 wolves, considering Botswana, Mozambique and other extremely poor countries in Africa, are working really very hard to keep their lions. Imagine the outcry if those nations sought to kill half of their lions? We can’t even say Norway is trying but failing – it’s government policy to have as few wolves as possible.

“We need African countries to teach us, rich Europeans, how to live with predators.”

This article was first published by The Guardian on 26 Jan 2018.

We invite you to share your opinion whether Europe’s wolves should be rewilded? Please vote and leave your comments at the bottom of this page.