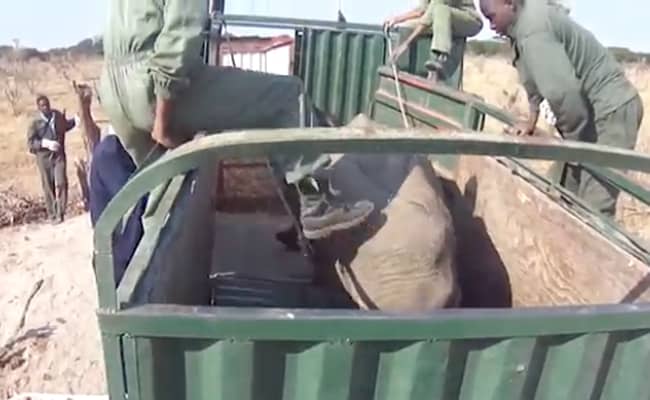 After being taken from her family and the only life she’s ever known, a young female elephant estimated to be just five years old is loaded onto a truck, while men repeatedly kick her in the head, hit her and pull her by a rope as they try to get her to move back. Her first new experience after barely waking from sedation is being assaulted.

Just moments before, she was wild and free with her family, but her future has been forever changed and others just like her have suffered the same fate, and more will yet – all for the sake of keeping elephants in captivity.

It’s a heartbreaking process that was just exposed through rare and exclusive footage released by The Guardian. It was taken in August in Zimbabwe’s Hwange National Park, when five elephants were captured by members of the Zimbabwe Parks and Wildlife Management Authority (Zimparks).

According to The Guardian, the usual process was followed. A herd is chosen, then young members were shot with sedatives from the air. As they collapse, their concerned family members are driven off by the pilot, and a team on the ground wraps up the fallen and loads them onto trailers.

In all, 14 elephants were captured during this time period, about half of the target goal which wasn’t reached due to a helicopter crash. Those who were taken were moved to holding pens at an off-limits facility within Hwange, where they will wait before being shipped away.

An inside source said they were sold to a Chinese buyer, but it’s not known if or when they were exported, or where exactly they will end up.

It’s sickening to consider the terror and grief inflicted upon those who are taken and those who are left behind, and the lifetimes those taken will spend confined in enclosures after being torn from everything that would have enabled them to thrive. Still more concerning is that what happened to them is all perfectly legal under the Convention on the International Trade in Endangered Species (CITES).

“You don’t have to be an elephant specialist – or an animal rights advocate- to find this video horrific. What is even more pervasively disturbing is that CITES has considered such activity as legal – all under the guise of ‘conservation’ – which we call the CON in conservation. This video exposes the callousness of this con – yet it doesn’t only occur in Zimbabwe with elephants destined for zoos in China,” In Defense of Animals’ (IDA) Elephant Scientist, Toni Frohoff, Ph.D., told Care2.

Under CITES, there are a few requirements; The destination must be “appropriate and acceptable,” and the sale must benefit conservation in the exporting country. However, elephant advocates have raised serious concerns about the current system, such as allowing importing nations to decide what is appropriate and acceptable, failing to monitor how sales are supporting conservation, and the number of elephants being captured and sold.

Last year, the U.S. imported 17 elephants (one died before transport) from Swaziland for the Sedgwick Zoo in Kansas, the Henry Doorly Zoo in Nebraska and the Dallas Zoo in Texas – the zoos’ selfish, misguided and misleading efforts to bring those elephants here landed them in a three-way tie for the number one spot on IDA’s list of the Ten Worst Zoos for Elephants.

Just this month, one of them, a young male named Warren, died after being anesthetized at the Henry Doorly Zoo, shutting down plans to use him and ship him around to other zoos for breeding.

CITES members had a chance to upgrade all elephants to Appendix I at CoP16, a listing that currently excludes elephants in Botswana, Namibia, South Africa and Zimbabwe, which would have increased protection for them and further restricted their trade, but there wasn’t enough support.

Why This is Happening

While the captivity industry continues to claim that zoos support education and conservation efforts, and supporters maintain that having close contact with elephants helps people care about them, they’ve been in captivity for decades and populations of African and Asian elephants have declined so rapidly that extinction is becoming an increasingly likely scenario.

Captivity may help if elephants were ever going to be returned to the wild, but that isn’t part of the Species Survival Plan for elephants in U.S. zoos, or the goal elsewhere.

The only point is to have captive elephants, especially those precious, crowd-pleasing little babies who bring in money from visitors.

“These numbers – and this video – should impact anyone who truly cares about conservation and welfare to think twice before they pay to see elephants at the zoo. Zoos treat these magnificent elephants as their “cash cows”; when the public pays to see them they increase the demand. Don’t buy the CON in conservation – none of the elephants born in zoos will ever be returned to the wild,” added Frohoff.

Instead, these enormous, far-ranging, highly intelligent and social beings will spend their entire lives in captivity, where they are stripped of their autonomy and their ability to choose their friends and mates. Where they’re denied lifelong bonds with family members and are subjected to the monotony of small barren landscapes and the psychological stress and chronic health issues caused by their confinement.

Hopefully this footage will help change hearts and minds about keeping elephants in captivity, raise awareness about the harm its causing, and increase pressure on CITES delegates to act to end the trade in live elephants.

In the meantime, you can help keep the pressure on by signing and sharing the petition calling on authorities in Zimbabwe to stop exporting live elephants.

You can also help by avoiding zoos and other venues that keep captive elephants, and support sanctuaries and organizations working to end captivity. Just a few of those include In Defense of Animals, Elephant Voices, David Sheldrick Wildlife Trust, The Elephant Sanctuary, Performing Animal Welfare Society and the Global Sanctuary for Elephants.

This article was first published by Care2.com on 5 Oct 2017.

We invite you to share your opinion whether the export of young elephants to Chinese zoos should be banned? Please vote and leave your comments at the bottom of this page.