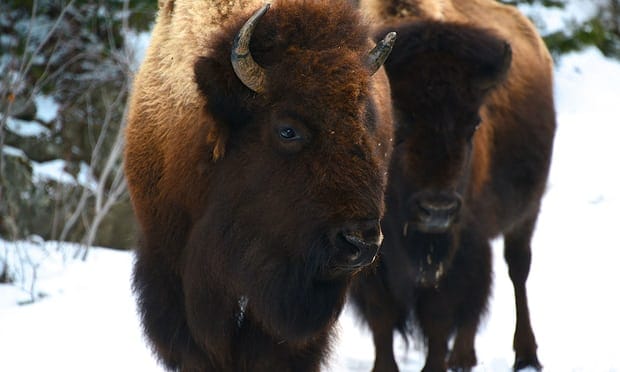 The National Park Service plans to thin a herd of bison in the Grand Canyon through roundups and by seeking volunteers who are physically fit and proficient with a gun to kill the animals that increasingly are damaging park resources.

Some bison would be shipped out of the area and others legally hunted on the adjacent forest. Within the Grand Canyon, shooters would be selected through a lottery to help bring the number of bison roaming the far northern reaches of the park to no more than 200 within three to five years.

Some 600 of the animals now live in the region, and biologists say the bison numbers could hit 1,500 within 10 years if left uncontrolled.

The Grand Canyon is still working out details of the volunteer effort, but it’s taking cues from national parks in Colorado, the Dakotas and Wyoming that have used shooters to cut overabundant or diseased populations of elk. The park service gave final approval to the bison reduction plan this month.

The Grand Canyon bison are descendants of those introduced to northern Arizona in the early 1900s as part of a ranching operation to crossbreed them with cattle.

The state of Arizona now owns them and has an annual draw for tags on the Kaibab national forest. Nearly 1,500 people applied for one of 122 tags this year, according to the Arizona game and fish department.

The bison have been moving in recent years within the Grand Canyon boundaries where open hunting is prohibited. Park officials say they’re trampling on vegetation and spoiling water resources. The reduction plan would allow volunteers working in a team with a park service employee to shoot bison using non-lead ammunition to protect endangered California condors that feed on gut piles.

Hunters cannot harvest more than one bison in their lifetimes through the state hunt, making the volunteer effort intriguing, they say.

“I would go if I had a chance to retain a portion of the meat,” said Travis McClendon, a hunter in Cottonwood. “It definitely would be worth going, especially with a group.”

The Grand Canyon is working with state wildlife officials and the Intertribal Buffalo Council to craft guidelines for roundups and volunteer shooters, who would search for bison in the open, said a park service spokesman, Jeff Olson.

Much of the work would be done on foot in elevations of 8,000ft or higher between October and May when the road leading to the Grand Canyon’s North Rim is closed. Snowmobiles and sleds, and helicopters in rare instances, would be used to remove the bison meat, park officials said.

Carl Lutch, the terrestrial wildlife manager for game and fish in Flagstaff, said some models require volunteers to be capable of hiking eight miles a day, carrying a 60lb pack and hitting a paper plate 200 yards away five times.

The head and hide of the bison would be given to tribes, or federal and state agencies.

Lutch said one scenario discussed was splitting the bison meat among volunteers, with each volunteer able to take the equivalent of meat from one full bison. Anything in excess of that would be given to tribes and charities, he said. A full-grown bull can have hundreds of pounds of meat.

Theodore Roosevelt national park in North Dakota used volunteers in 2010 for elk reduction, selecting 240 people from thousands of applicants, said a park spokeswoman, Eileen Andes. Some quit before the week was over, she said.

“We had quite a bit of snow, so you’re not in a vehicle, you’re not on a horse,” she said. “You’re hiking through snow to shoot elk and haul them out. It was exceedingly strenuous.”

This article was first published by The Guardian on 11 Sep 2017.

We invite you to share your opinion whether the Grand Canyon Bison should be culled? Please vote and leave your comments at the bottom of this page.

It always amazes me that humans think they can manage wildlife better than nature.

If you take a few mintues to reaearch the history of this particular herd, you will find that is was introduced, crossed with cattle genes, and let go when the enterprise went sour. For many decades the hard remained small but has now become too large for that area to handle ecologically. Fences have been set up and studies done as to the ecological effects on one side or the other. These are not wild plains buffalo doing their job–they are manipulated herds that have no predators now since we eliminated those, so we have to fill that role. Historical… Read more »

The cullers should be culled instead. Much less destruction in the environment.

NO HUMAN IS ABOVE NATURE OR EVER CAN BE .LEAVE THE BISON ALONE. I’D LIKE TO CULL A FEW “HUMANS” THO !

I grew up with a private heard of Buffalo. We kept the heard at approximately 100 head. Bison are the same as cattle. They must be managed today as the land is designated to them is restricted. Buffalo do not have the wide open spaces they had to roam 200 years ago.

Well, if they wouldn’t try to shoot all the wolves at this park, the culling question wouldn’t even come into play! Shame on the USA wildlife managment – do they want to turn our National Parks into shooting gallaries? Enough! Leave it well enough alone, for goodness sake!

The human race should be culled.

Cull the bison or bring wolves and jaguars back?

Are you serious? Why should we cull a mammal that nearly vanished from the vast american plains.There where less than 1000 bison in America before conservation action turned the tide for these Ice-age survivors and their population bounced back.And now we think there are enough of them,so they need to be culled!? Such a narrow perspective.North America is unique due to its wilderness! A land of trees,rivers,ice,mountains and giants!

Humans should stop interfering with wildlife as the animals know when to cut back their breeding!

NO – the very idea that we have too many wild animals is so wrong – These people are not God – They need to stop determining when they think we have too many animals – Bison in this case. let the animals live – shame on these little college geeks who think they can decide when to kill or not to kill these beautiful Bison! The whole wildlife management clan need to get their act together and stop and think about what they are doing! Stop killing off our wildlife!

I think its a fucking shame that the USA wildlife management wants to act like a bunch of assholes who just want an excuse to get a bunch of free meat from the land, land that ALL belongs to the Native Americans in that area…..as it has for thousands of years before it was all stolen from them….by the USA government……I KNOW FOR A FACT that non-lethal methods of bison removal are an easy way to get rid of excess bison IF they are causing damage to the environment …WHICH I THINK IS HIGHLY UNLIKELY…(BECAUSE BISON DONT DAMAGE THE LAND… Read more »

These are huge non-native beasts and do not belong here, as well as wild burros and horses. Man moved them around for financial gain and then let them loose when that plan didn’t work. This is such an easy thing to fix compared to the bigger problems the world faces

Nope pack em up in trucks and move where they aren’t a problem.