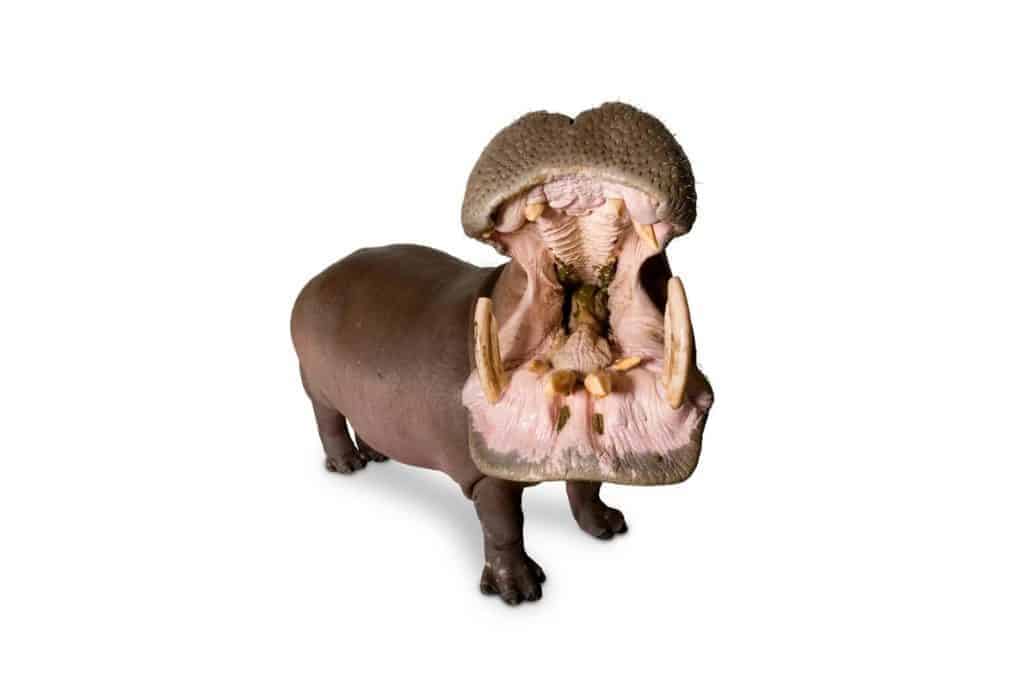 Kampala, Uganda – Investigators posing as buyers lured the suspects to a lodge near Buliisa, a town in western Uganda, as night set in. The two men arrived by motorbike with the contraband concealed inside a nylon sack.

“They requested for me to take [the sack] inside a room,” one of the men, Fred Byenkya, tells me. It was laden with 234 pieces of hippopotamus teeth, taken from as many as 58 illegally killed hippos. “Then,” Byenkya sighs, “the policeman said, ‘You are under arrest.”

I spoke with Byenkya last month in the Buliisa jail, where he and his accomplice, Moses Okech, had just been sentenced to spend two years for illegally possessing wildlife products, in this case hippo teeth. Ugandan authorities say the men were selling the contraband to agents of international buyers and that the teeth were destined for Asia, where hippo ivory is carved into ornaments.

Byenkya and Okech were the middlemen in a trafficking network. The poachers who killed the hippos remain at large, and it is not known who the buyers who control the trade are.

“We have not got the real kingpins—we’ve mainly arrested Ugandans who don’t even know the traders because it is a chain,” says Charles Tumwesigye, deputy director of conservation with the Uganda Wildlife Authority. He says it’s probable that elephant ivory traders are also involved in smuggling hippo ivory because it’s used in similar ways but is cheaper.

In 2014 Uganda, increasingly worried about falling hippo numbers, banned the trade in hippo teeth, which had been legal. But the wildlife authority says that since the ban the flow of hippo ivory to international markets has continued, much of it going to Hong Kong, as was the case when the trade was legal.

So far this year investigators have seized nearly 900 pounds of hippo ivory—a fraction of the total suspected illegal trade in Uganda, according to Vincent Opyene, a lawyer and the founder of the Kampala-based Natural Resource Conservation Network, which investigates wildlife trafficking in the country.

Records of the Convention on International Trade in Endangered Species of Wild Fauna and Flora (CITES) show that between 2004 and 2014 Hong Kong reported importing almost 60 tons of teeth from wild hippos in Africa for commercial purposes—nearly half from Uganda. Under CITES a regulated legal trade in hippo ivory is allowed, and trade figures show that the source countries are now predominantly Tanzania, Zambia, Zimbabwe, and Malawi.

Hippo carvings are popular partly because they command lower prices than those from elephant ivory, Patrick Leung, a trader in Hong Kong, told me by phone. He said his carvings sell for between $50 and $500 and that many of his customers are in Europe. During the past decade thousands of hippo ivory carvings have been exported legally from Hong Kong to France, Belgium, Spain, and Italy. Europeans, Leung said, “like carved animals and people—samurai warrior.”

Hippo ivory is “beautiful, durable, workable,” says one ivory trader in the state of Washington, who legally imports hippo teeth from Tanzania. (He asked not to be identified for fear of harassment by ivory opponents.) He said he sells hippo teeth both in their natural state and carved as razor handles. “A few people still like to have something from nature that is real, made by God,” he said. “Because of the small size and nice shape of the pegs, they’re great for specific small projects and are not prone to cracking like the much larger canines.” (Pegs are the hippo equivalents of our molars.)

The Toll of Hunting

It’s not known how many hippos are left across Africa, but during the past few decades the animal, with a reputation as the continent’s most dangerous—more dangerous than lions, elephants, even Cape buffalo—has become increasingly threatened by hunting.

The International Union for Conservation of Nature (IUCN), which monitors the conservation status of species, classifies hippos as vulnerable because threats of illegal, unregulated trade in their teeth, demand for their meat, and habitat loss are likely to continue. In 2008, in its last published assessment of hippos, the IUCN estimated their continent-wide numbers to be between 125,000 and 148,000. Since then thousands have been legally and illegally killed for the domestic and international trades.

Before Uganda’s 2014 ban, hunting hippos was illegal, but their teeth could be traded legally if they came from carcasses of hippos that died naturally or were killed only for bush meat, according to the Uganda Wildlife Authority.

But such large volumes of ivory were being traded that the authority suspected falsified export permits were being used for teeth from hippos poached in neighboring Democratic Republic of the Congo. Although hippos are a protected species there, and no legal trade has been recorded in nearly 20 years, places like Virunga National Park—once a hippo stronghold—now have a fraction of their original populations.

“We put a ban to make sure that people don’t think they can make money out of this,” says Tumwesigye, adding that the threat remains from ivory trafficking and poaching for their meat.

How great a toll the illegal trade in teeth is having on Uganda’s hippos is anyone’s guess. Authorities suspect that seized teeth could be coming from hippos in areas that aren’t monitored. The country has too few rangers to watch over all the places hippos are found. “Where there is no protection by the Uganda Wildlife Authority,” Opyene says, “the hippos in those water bodies are vulnerable and will always be poached.”

Hippos are often hunted at night when they emerge from the water to graze on land. They’re snared, then speared. “Once you kill one hippo, you have enough meat to feed the whole village,” Opyene says. “After you have made your kill, you also have the hippo teeth to sell.”

The men jailed for possessing the 234 pieces of hippo ivory said the contraband came from a fisherman, who authorities could not trace. Okech and Byenkya lamented that they were in prison while others in the trade were still at large. They maintained their innocence as they sat cross-legged on a grassy patch outside their cell. “I will leave everything in the hands of the Lord,” said Okech, who had rosary beads around his neck. “My children, they are suffering now,” Byenkya added.

Opyene says criminals higher up the chain deploy agents to buy hippo teeth for the international market. “They are people from China, they are Indians, people from Dubai,” he says. “But it’s under investigation, so we can’t tell you everything.”

Tumwesigye suspects the teeth are smuggled out of Uganda through two main routes: the international airport in Entebbe and overland by road into neighboring Kenya to the port of Mombasa, known to be a major entrepôt for illegal wildlife products going to Asia.

“It is possible that because the hippo teeth are smaller, if they are well packed and concealed, you will put them in a container for timber or for other products that are being exported,” Tumwesigye says. “Most times this hippo teeth, this ivory, is passing through the [borders] disguised as something else.” He says border officials are paid off to turn a blind eye to the smuggling.

The Cancer of Corruption

Tumwesigye calls the corruption that fuels wildlife trafficking in Uganda a cancer. He says it has even spread to his own government agency. “Definitely. I admit. I know that we don’t have angels—sometimes they collude with poachers, get money,” he says. According to Tumwesigye, in the past the wildlife authority has dismissed staff caught informing poachers about where rangers were patrolling national parks to help the hunters avoid those areas.

Corruption, lack of resources, and few prosecutions of top traders work against a full understanding of the scale and nature of the illegal hippo teeth trade. The trade is also overshadowed by more concerted efforts to shut down smuggling of elephant ivory and pangolin scales. “There is need to really do something for the hippos because not so much is being done, and yet there is a lot of illegal trade taking place,” Opyene says.

There are also calls for more scrutiny of Africa’s legal hippo teeth trade and its toll on the species. “Thousands and thousands and thousands of hippos have been slaughtered over the past 10 years to provide ivory for the general ivory trade,” says Pieter Kat, a conservation biologist who has worked on wildlife issues around East Africa for more than 20 years.

During the past decade thousands of hippo skins have also been sourced for leather products, with the United States and Mexico among the main markets. And hundreds of hippo trophies, such as feet and heads from legal hunts, have been exported.

The way the trade works is that each country sets its own export quota, which, based on scientific studies, must be at levels that will not harm the species. The country and CITES are jointly responsible for monitoring trade, but, Kat points out, this system has failed vulnerable species in the past. The African gray parrot, for example, declined drastically in the wild because of rampant commercial trade, which was prohibited by CITES late this year.

“The legal trade has been a machine that has mined African wildlife species without any proper controls,” Kat argues. “Far too late what we have seen is CITES and other organizations belatedly put in place controls. We don’t even know how many hippos there are these days in Africa.”

According to Kat, until independent, reliable counts of hippo populations in trading countries are carried out—such as the completion recently of the Great Elephant Census—it will therefore be impossible to determine whether the trade is sustainable.

“What we need to realize is African wildlife conservation should not be guided entirely by a focus on elephants and rhinos,” Kat says. “Many many other species are being traded to extinction in Africa, and I would have to say hippos are probably one of the most obvious examples of this.”

This article was first published by National Geographic on 07 Dec 2016.

We invite you to share your opinion whether the illegal trade in hippo teeth should be stopped? Please vote and leave your comments at the bottom of this page: