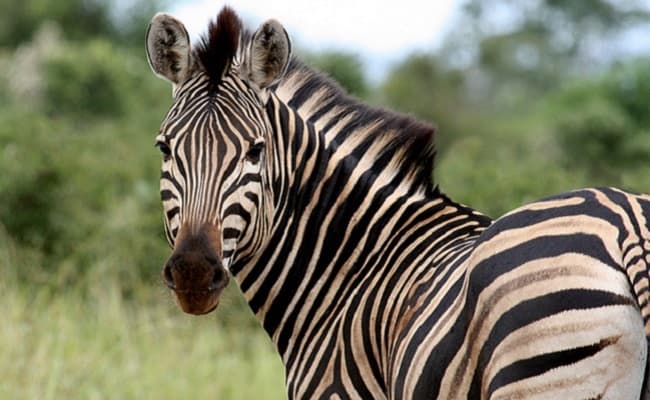 As the temperature plunged below zero late in January, a zebra’s back hooves got caught in a fence surrounding the Indiana farm on which he was being kept as a pet. Despite the extreme weather conditions, no one bothered to check on the welfare of this animal.

Unable to free himself, the zebra panicked, gulping in so much icy cold air that it crystallized in his lungs, killing him.

Zebras in the wild make their habitats in warm savannahs and grasslands where the temperature is never subfreezing. The chilliest it gets in the winter is about 68 degrees Fahrenheit.

In a heartbreaking photo taken by Indiana resident Sonya Kendall, another zebra lies beside the body of his trapped, dead friend. Along with these two zebras, their unidentified owners also have pet kangaroos—and they are breaking no laws in Indiana.

In fact, statewide, Indiana doesn’t ban keeping any species of animals as pets. Owners simply have to apply for a $10 permit to keep them.

Zebra freezes to death in Indiana after hooves get stuck in fence amid extreme cold temperatures https://t.co/wewj2tyNQd pic.twitter.com/xiHgMRAzCj

The Indiana Department of Natural Resources (DNR) approves about 25 new wild animal permits every year, Linnea Petercheff, operations specialist with the division of fish and wildlife, told the Indianapolis Star in 2014. At that time there were permits for over 300 exotic pets in the state, including a bobcat, coyote and rattlesnake. Only the owners of dangerous animals must have their properties inspected by the DNR and provide the department with plans in case the animal escapes.

Many exotic pet owners in Indiana don’t apply for permits, Petercheff said. The DNR responds every week to calls about these animals, usually reported by neighbors and veterinarians, and these calls had increased in recent years. The owners may simply receive a warning, or the department may confiscate the animal. The most owners can be charged with is a misdemeanor, punishable with a maximum $500 fine and up to 60 days of jail time.

As the zebra that froze to death tragically illustrates, the private ownership of exotic animals can result in inhumane conditions for the animals, and it can also be dangerous for people. For these reasons, many animal welfare organizations—including the American Veterinary Medical Association, ASPCA and Humane Society of the United States—oppose it.Twenty U.S. states have comprehensive bans on exotic pet ownership.

“Indiana laws need to do more to protect animals,” Kendall told The Hill, with “stricter regulations on exotic animal ownership [and] more specific language in the laws that outline what is really adequate and safe shelter, especially in extreme weather situations.”

Carroll County Sheriff Tobe Leazenby and other officers inspected the farm on which the zebra was living and determined it provided “adequate provisions for outside animals,” including shelter, food and water, WFLI reports. The property owners, Leazenby said, “are going through more measures to ensure the rest of their animals remain safe.”

The sheriff’s department is filing a report with the Carroll County Prosecutor’s Office, which will decide whether this was a case of animal neglect or just an accident. It seems to be a tragic case of both—and it could have been avoided if, like many U.S. states, Indiana banned the private ownership of exotic animals.

Please sign and share this petition urging Indiana lawmakers to prohibit the private ownership of wild and exotic animals as pets.

We invite you to share your opinion whether the ownership of wild and exotic animals as pets should be banned? Please vote and leave your comments at the bottom of this page.

Most people are clueless about how to care for wild animals. They neither accept nor comprehend that these animals are wild at heart and not meant to be placed in situations suited for so called domesticated animals.

Our little rescue macaw magic mikey has taught us a lot about the grace and beauty of his untamed nature, and that of other animals not meant to be pets.

One imagines that the people that voted “no” probably have in their possession, or are planning on owning, a wild animal as a pet. This is ridiculous as these animals should be kept in their natural environment IN THE WILD!! Most wild animals live in groups or herds and removing an animal from this environment is destined to have a severe effect on the animals mental well-being, and this is why most wild animals kept in captivity, even in zoos, where they purport to know about wild animal husbandry, don’t thrive. There are few enough wild animals surviving on the… Read more »