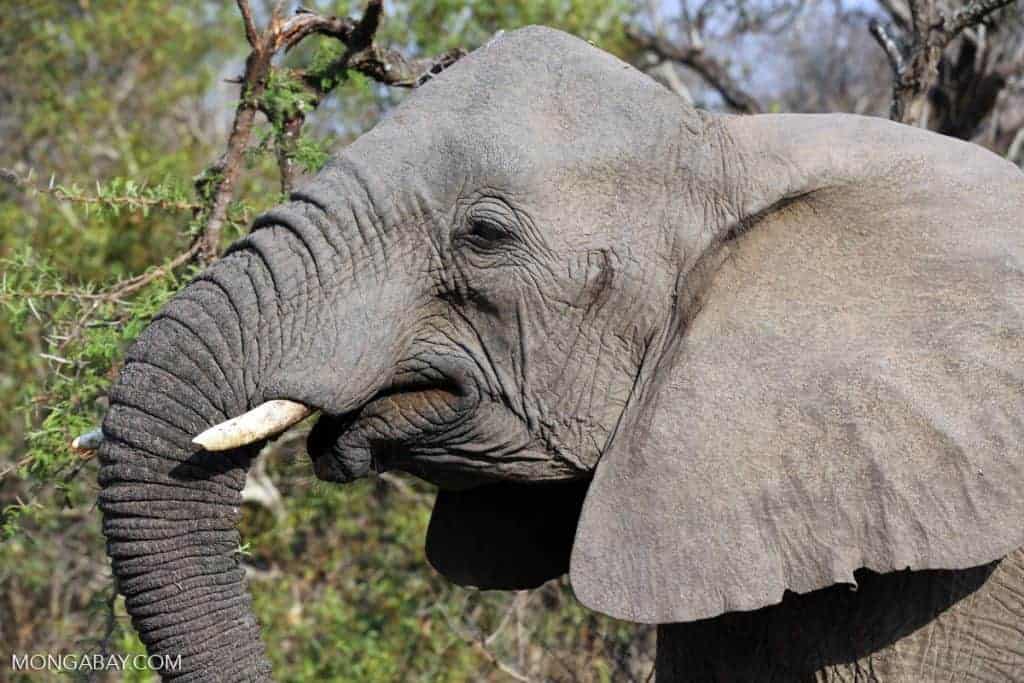 The UK and EU, the world’s largest exporters of legal ivory, have been accused of not doing enough to save Africa’s fast disappearing elephant populations.

“This is the last chance saloon to save elephants,” said UK Labour MP Justin Madders at a meeting at Westminster Hall on Monday where more than 30 MPs on both sides of the chamber debated a public petition of 107,000 signatories calling for government to close its domestic ivory markets.

He added that even though the UK government announced some proposals to restrict the sale of ivory, “there is a general concern that the proposals do not go far enough in protecting elephants”.

Africa, China and the US are leading efforts to reverse the critical situation for elephants – whose numbers in Africa are believed to have declined by a third in the last seven years – while the UK and Europe are lagging behind.

Countries like South Africa and Namibia opposed the ban, and called for open markets with regulations in place. Photo by Rhett Butler.

Last year countries reached a historic international agreement to shut down domestic ivory markets that contribute to poaching or illegal trade. The recommendation applies to parties to the convention on the international trade in endangered species (Cites), which includes the UK, the EU, China, the US and 29 African countries, calling themselves the African Elephant Coalition (AEC), along with Botswana, formerly a major ivory trading nation.

“But,” warns Patrick Ormondi, chair of the AEC, “it will be meaningless if countries ignore it.”

Outside Africa only China, India, the US and France – the lone standout European country – have responded by implementing measures to close their domestic markets. On the 30 December China’s announcement that it will stop its ivory trade by 2017 effectively closed down the world’s largest domestic market.

“It’s amazing that we might be learning lessons from China,” said Owen Paterson, Conservative MP during Monday’s meeting. “It is simply not possible to maintain the high moral ground and tell other countries what they should be doing if we have not set an example. It is absolutely incredible that we have fallen behind.”

But others argue that ivory older than 70 years is “part of all our cultural history”. Conservative MP Victoria Borwick, who is also president of the British Antique Dealers’ Association and advised by the British Art Market Federation and the Antiquities Dealers’ Association, said that “we must stop the current trading in raw and poached ivory, but that is not the same as trading in antique cultural artefacts”.

She pointed out that the current threats to whales does not prevent the sale of scrimshaw and corset bones in the costume collections in our museums, and argued that modern poaching and the antique ivory trade are in no way linked. “Buyers [in China] have no interest in most historical objects on sale in the UK; they desire ivory in any form and prefer it shiny and modern.”

Heather Stewart is joined by Polly Toynbee, Ryan Shorthouse and John Healey to discuss the passage of the Brexit bill through the Commons and the government’s new housing strategy. Plus we hear from Labour’s leader in the Lords, Baroness Smith, and Angelique Chrisafis on the French election

The UK and Europe’s domestic ivory markets are thriving and the bloc is the world’s largest exporter of antique ivory. International trade in ivory is permitted under Cites regulations, but may only involve ivory acquired before the convention came into being in 1975, and only as long as a certificate proving each item’s age is provided. In the case of the UK, antique ivory is classified as ivory acquired before 1947, which some have said goes further than internationally agreed regulations.

However, the antique trade is said to contribute directly to illegal trade, providing the opportunity for illegal ivory to be laundered. According to Conservative Party MP, Luke Hall, who introduced the debate: “It is difficult for our law enforcement officers to tell the difference between pre and post-1947 ivory, especially as newer ivory is frequently and deliberately disguised as antique.”

An EU document issued in February 2016 states that: “Between 2011 and 2014, EU member states reported seizures of around 4,500 ivory items reported as specimens and an additional 780kg as reported by weight.” Most was destined for Asia, particularly China, Hong Kong and Vietnam.

The report notes that: “it is often difficult to distinguish pre-convention specimens”, and points out there are many cases of buyers purchasing ivory using forged pre-convention certificates with the intention of exporting them illegally to Asia.

The UK is by far the largest exporter of ivory items by number among EU member states with declared exports of 25,351 ivory items, 54% of the EU total, between 2006-2015.

Last year Christie’s was fined more than £3,000 for selling a piece of ivory without the relevant documentation, while Hall cited the example of an individual based in the UK who was prosecuted November 2016 for selling 78 ivory items valued at almost £6,500.

Meanwhile the European commission[pdf] is set to issue new guidance on ivory trade within and exports from the European Union. But observers warn that the results may be disappointing. Daniela Freyer of German-based conservation group Pro-Wildlife said she expected “likely just an EU-export ban for raw ivory, nothing on worked products”. She added: “Germany wants to go a bit further but they claim they are not getting support for their position. The commission and most EU countries don’t want to do anything to restrict their internal market in the near future.”

The UK seems to be doing little too. This is the second time that the domestic ivory has been debated in the house in the past two months, following a debate on 8 December, when minister of environment Therese Coffey minister promised a consultation, something that has yet to occur.

Labour MP, John Mann, summed up the public mood: “If I were a minister, I would ban the lot and stop any trade in or movement of ivory. The survival of the elephant is far more important than a museum. It is about time we were bold and said that there should be no half-measures, mixed messages, little promises or small steps forwards. A total ban is what I want.”

Sadly, in spite of overwhelming cross-party support from MPs and strong public support for action on this issue, Coffey’s response was simply that consultation on whether or not to close down the domestic ivory trade would begin “shortly” and that she “really hope[s] it will be as soon as possible” – a claim that had already been made in December.

This article was first published by The Guardian on 08 Feb 2017.

We invite you to share your opinion whether the trade in both raw and antique ivory be banned? Please vote and leave your comments at the bottom of this page.