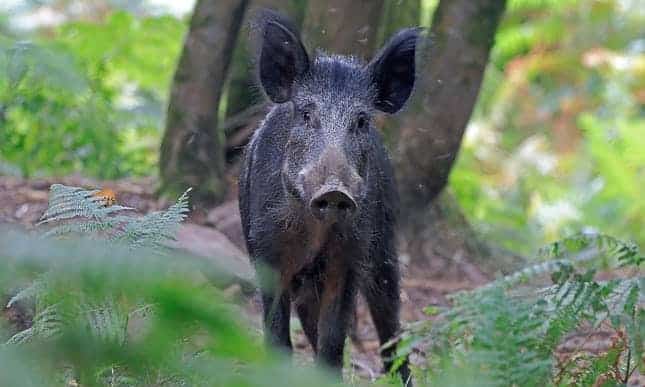 Drew Pratten admits it can be a little unnerving to suddenly come upon a wild boar in the forest.

“They are very big. When they growl at you it’s primal. You get the sort of feeling deep in your stomach that you get when you hear a lion roar. But these animals don’t want to hurt anyone. If you slowly back away they are fine. We should all be living peacefully together.”

Pratten, a 49-year-old marketing consultant, is one of a band of dedicated animal rights activists in Gloucestershire pitting itself against marksmen and government officials in what is being dubbed the “Boar War”.

The Forestry Commission has set up gun towers from which marksmen cull the powerful pigs that roam the ancient woodland between the river Severn and the Welsh mountains.

A 30-strong group calling themselves the Forest of Dean Wild Boar Cull Saboteurs is determined to stop them. The “pixies”, as the activists term themselves, have been accused of tactics ranging from knocking over gun towers to smearing excrement over gate locks (they deny the second allegation).

A Gloucestershire police inspector said the activists were wasting taxpayers’ money while local politicians are calling for both sides of the boar dispute to come together to find a peaceful solution.

Pratten, 49, who acts a spokesperson for the saboteurs, met the Guardian at the Speech House, a 17th century former hunting lodge at the centre of the Forest of Dean.

He pointed out the signs of the creatures’ presence: the turned earth where they had foraged for insects and roots; the flattened bracken where they had slept.

“The boar should be seen as a massive asset to this place. It’s the one thing these days that the Forest of Dean is known for but at the moment they are being demonised.”

Pratten smiled when asked if he is a pixie and replied: “I have taken part in direct action.” Denying any member of his group had smeared excrement, he said: “It’s childish, it doesn’t help. If you want to disable a lock there are better ways of doing that.”

In previous years the Forestry Commission built wooden towers from which to shoot from. “The wooden towers were knocked over in the wind or by pixies. Some were dismantled,” Pratten said.

This year the commission set up metal ones to reduce maintenance costs and vandalism. Critics say they look like the sort of structure that you might come across in a prison of war camp.

“You’d need an angle grinder to tackle one of those,” said Pratten. “And nobody’s got an extension lead that long.” But there are softer ways of disrupting the cull. “They put bait out, you take the bait you put it somewhere else. Simple. We’re saying don’t eat it over here, eat it over there.”

Boar became extinct in England 300 years ago. The original modern Dean population established after an escape from a wild boar farm in the 1990s and an illegal release in 2004.

Average litter sizes in the Dean are between six and 10 piglets, nearly twice that of their cousins on the continent. They have no natural predators – except man – and the recent mild winters have helped populations soar.

The Forest Commission, the government department that manages more than 7,000 hectares (17,300 acres) of land in the area, defines the boar as feral.

It says the most obvious sign of the boar is the damage caused to grass verges, parks, sports pitches and church-yards but it reports there have been incidents of people being chased by boar and dogs being killed.

The commission says there are also “wider social impacts” of boar, such as older and more vulnerable people being afraid to go out at dusk or at night for fear of meeting one of the animals.

In addition, it points out that the number of road traffic accidents involving boar overtook those involving deer in 2013.

The commission put the boar population in 2016-17 at 1,562, though some activists believe this figure is inflated. It has set a “target” population at 400. During the 2016-17 cull, 492 animals were killed – a number that also includes those killed in road accidents.

While some of the activists believe contraception could be a way of managing the population, the commission has authorised shooting.

Residents in the town of Cinderford on the fringe of the forest are split. Butcher Cameron Swaine sells boar sausages, burgers and steaks (though bought from private local landowners rather than the Forestry Commission, whose meat is sent out of Gloucestershire). “I understand people get upset when their garden is ruined by boar but for me they are part of the forest,” he said.

Marion Jayne, landlady of the Fern Ticket pub, said she felt sorry for the “poor little piggies”. “When I drive home late at night you see foxes, rabbits, deer and boar. If people don’t like them they shouldn’t live in the forest.” Bar worker Corrie Thomas, 22, had a close encounter with a boar in his car recently: “It clipped me – or I clipped it. Luckily it was a small one.”

Dog lover Jeff , who did not want to give his surname, said the animals made life in the forest more difficult: “You have to be very careful where you walk, they can be dangerous. I have to keep the dogs on a lead.”

Councillor Tim Gwilliam, the leader of the Forest of Dean council, said he believed the boar – if properly managed – could boost the local economy by attracting more visitors. He called on central government to take a grip of the situation. “I bet if they were trotting around Parliament Square they’d be sorted,” he said.

This article was first published by The Guardian on 12 Oct 2017.

We invite you to share your opinion whether wild boar should be culled in order to control the population? Please vote and leave your comments at the bottom of this page.