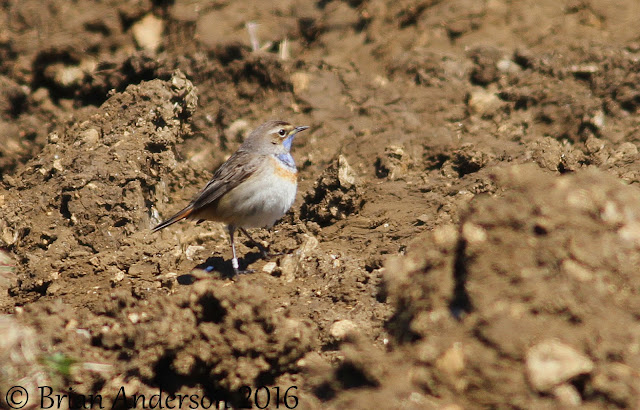 We had quite a drive this morning for a day on Portland birding for spring migrants. Having set off early we we in the obs garden at 7.30am but there was no news of yesterdays Bluethroat or Western Subalpine Warbler.

I headed off up the hill into the fields in search of anything that might have dropped in and wasn’t disappointed as the place was alive with Willow Warblers and Chiffchaffs and the morning gave up views of ten plus Common Redstarts along with large numbers of Wheatear.

Three Stonechat, a Little Owl, two fresh Short-eared Owls and another two roosting made up a nice support cast with Gannets and Auks in action at sea and a Raven mobbing the local Buzzards the general birding was pretty good.

A Hoopoe, Ring Ouzel and Gropper were all reported but we failed to connect with these three.

At 10am we headed down the track to see if we could find the Western Sub Warbler and as we reached the cliff top another birder said he thought he’d seen it a few moments ago so we plotted up and waited. Withing a few minutes we’d picked up the bird and managed to get the gathered group on it and even managed a couple of record shots as it flitted with haste in and out of a small bramble patch.

We left to return to the hill in search for the Hoopoe but news of another sighting of yesterdays Bluethroat distracted us and we pitched up with about thirty other birders to watch the privet patch in the hope the little treasure would show.

More Wheatear, more Redstarts, more Willow Warblers and then bingo the White-spot came out to feed but within seconds it had returned to the safety of the bramble.

This pattern repeated with us getting around a minute of bird in the next hour or so but in those precious seconds I grabbed a half decent record shot and we left for home more than satisfied with a very decent day on the Island.

Just love the White-spotted Bluethroat, not a bird I know and woud love to see. Little owls we have close to home but I never get a chance to take a photo of them. Great photos Diane